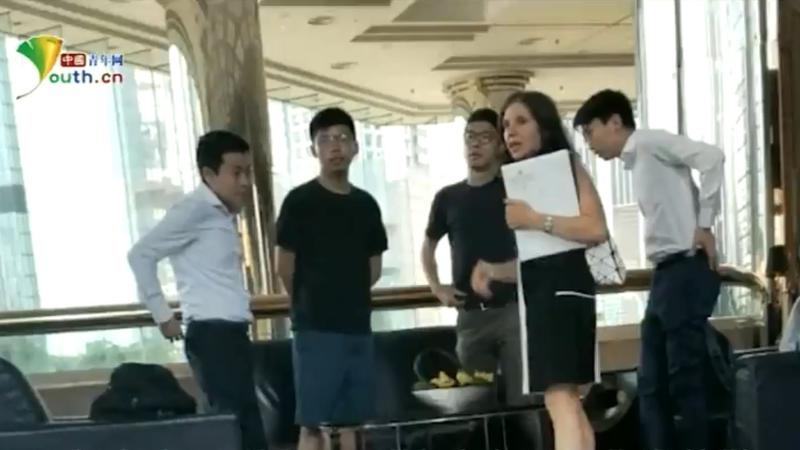 Washington should stop indulging in double standard, stop fueling protests in Hong Kong and not meddle in China's domestic affairs through their diplomats, experts have said.

Beijing and Washington traded barbs earlier this month over the reported meetings of US consular officials based in the special administrative region with the protest leaders and those advocating "Hong Kong independence".

Hong Kong-based Takungpao newspaper published a photo on Aug 8 of Julie Eadeh, a political counselor at the US Consulate General in Hong Kong and Macao, meeting with four young protest leaders on Aug 6.

Among the four were Joshua Wong Chi-fung and Nathan Law Kwun-chung, who were convicted in 2016 for incitement over the besieging of the SAR government headquarters in September 2014.

Ahead of the meeting with the protest leaders, on the same day, Eadeh and US Consul General Hanscom Smith met with opposition figures Martin Lee and Anson Chan Fang On-sang, Takungpao reported on Aug 12 with photos.

The United States' consular officials were urged to "immediately make a clean break from anti-China forces who stir up trouble in Hong Kong and stop sending out wrong signals to violent offenders", according to an official complaint submitted by the Chinese Foreign Ministry's Commissioner's Office in the HKSAR to the US Consulate General on Aug 8.

"Our diplomat was doing her job and we commend her for her work," Ortagus said.

In response, an unnamed spokesperson from the Foreign Ministry's Commissioner's Office in Hong Kong said Ortagus "seems to take it for granted that it is the job of American diplomats to collude with local anti-government and even separatist forces everywhere around the world".

"Such acts arbitrarily undermine other countries' sovereignty and security despite their opposition and indignation, and show little regard for international law and basic norms governing international relations, including noninterference in other countries' internal affairs," the spokesperson said in a written statement on Aug 9.

Wang Peng, an associate research fellow on international relations studies at Chongyang Institute for Financial Studies of Renmin University of China, said that Washington has been wary of and even hostile toward some China-funded public diplomacy publications or events in the US in the past year, while its diplomats have "recklessly approached individuals and agencies in Hong Kong that have substantially damaged China's territorial integrity".

"Such contacts (by the US diplomats) are nothing but intervention in China's sovereignty," Wang said, adding that "the US should align actions with words, not uphold double standards - keeping a close eye on others while examining itself in a sloppy manner".

Just days after the US diplomats' met with the opposition leaders, Nathan Law made his announcement on Wednesday on his Facebook account that he had arrived in New York for further studies at Yale University.

Asked by local media on Aug 7, Joshua Wong admitted he did meet with a US consular official on Aug 6 and discussed about the Hong Kong Human Rights and Democracy Act, which was proposed by the US lawmakers in June, as well as embargo on powerful weapon exports to the Hong Kong police.

Li Haidong, a professor of US studies at China Foreign Affairs University, said it is common to see diplomats from various countries communicating with people from all walks of life in their destination countries or regions.

While China pursues exchange of views, better mutual understanding, greater stability of two-way ties and advancing economic cooperation through such communications, many US diplomats seek to spread US ideology, pattern of democracy, legislative architecture and private economy model, and they have a strong sense of mission in these fields, Li said.

"And if they (the countries or regions) do not accept the US pattern, it is difficult and unlikely for them to maintain steadfast, long-lasting relations with Washington," Li said.

"Also, quite a number of the elite US diplomats believe that long-lasting stability and peace in other parts of the world could only be achieved through US patterns and models," he said.