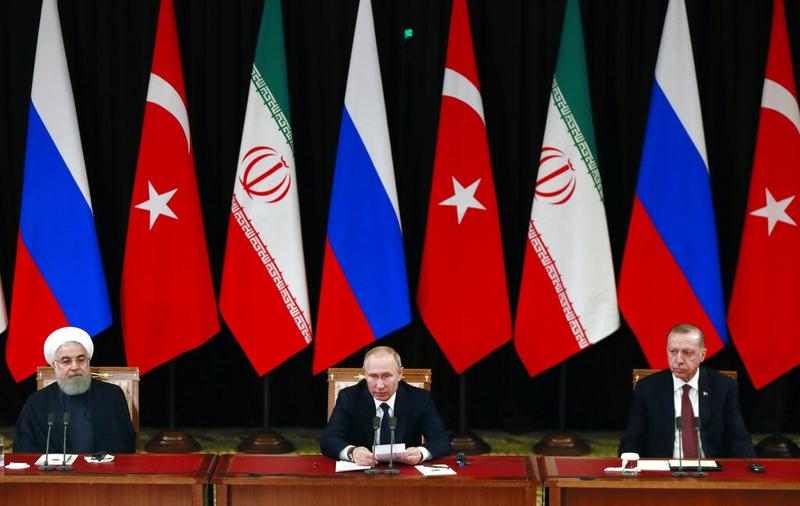 MOSCOW — Russia, Turkey and Iran on Thursday agreed on several key directions of future interaction in the settlement of the Syrian crisis after a trilateral summit of their presidents in the Russian city of Sochi.
"It is very important that our three countries intend to strengthen cooperation within the framework of the Astana process, which proved its necessity," Russian President Vladimir Putin said at a press conference, following "constructive and businesslike" talks with his Turkish and Iranian counterparts.

We will continue to enhance our efforts in fighting terrorism, promoting intra-Syrian dialogue and improving the humanitarian situation in Syria

"We will continue to enhance our efforts in fighting terrorism, promoting intra-Syrian dialogue and improving the humanitarian situation in Syria," he said.
In particular, the presidents agreed to continue the efforts to eradicate militants in Syria's rebel-held Idlib province and to take additional steps in finally eliminating the tension and reaching stabilization in this region.
Meanwhile, the three countries will help Syria establish a committee to carry out constitutional reforms in the country, Putin said.
"We have agreed to contribute by joint efforts to the most rapid start of work of the constitutional committee, which is to work on the fundamental aspects of the future state system of Syria," he said.
It is necessary to approve the list of participants of the committee, most of which have already been agreed on with the Syrian government and the opposition, and elaborate regulations for the main parameters of its functioning, Putin added.

Russia, Turkey and Iran are guarantors of a ceasefire deal in Syria and have been mediating a peace process for the Syrian crisis since 2016.
Putin said the three guarantor countries have helped to create favorable conditions for Syria's transition to peaceful development.
"We are convinced that a durable stability in Syria can only be reached by political and diplomatic methods in accordance with the resolution 2254 of the UN Security Council and with strict observation of principles of unity, sovereignty and territorial integrity of the country," he said.

He underlined the importance of humanitarian aid to Syria, saying that the three countries have contributed to the return of 1.5 million refugees.
On the other hand, he urged the international community to pool efforts so as to radically improve the situation in Syria, to eliminate acute social problems and to revive the economy.

Russia, Turkey and Iran are guarantors of a ceasefire deal in Syria and have been mediating a peace process for the Syrian crisis since 2016.

"We call on all interested states and international organizations, primarily the UN, to intensify aid to Syrians in return to peaceful life and overcoming the consequences of the military conflict," Putin said.

The three presidents also discussed the further development of the situation in Syria after the US announcement of plans to withdraw its troops from Syria's northeastern regions.
"We came to a general conclusion the implementation of these measures could become a positive step. It would help stabilize the situation in that part of Syria, where finally the control by the legitimate government should be restored," Putin said.
Echoing Putin's remarks, Iranian President Hassan Rouhani said it would be "good news" for local population if the US completely withdraws its troops from Syria and other countries in the region.
Therefore, he urged Washington to revise its Middle East policy, which is currently exerting negative influence on countries in the region.
"In the past 20 years, America has constantly played a destructive role in our region: in Afghanistan, in Iraq, in Syria, and today in Yemen...What we want or hope is that the US will reconsider its policy towards the region," Rouhani said.
He also noted that several things need to be taken into account for the sake of achieving peace and stability in Syria, including no foreign intervention, the assistance of the international community and the fight against terrorism.
Speaking at the press conference, Turkish President Recep Erdogan reaffirmed the importance of resolving the situation in Idlib.
"We do not want new tragedies, new humanitarian crises in Syria, or in other regions, or in Idlib...We will continue to do everything possible to implement the Idlib memorandum," he said.
Erdogan stressed that Turkey will coordinate actions with Russia and Iran in the process of the US troops pullout while taking into account of Syria's territorial integrity and eliminating the threats of terrorism, especially on the border areas.
According to Putin, the trilateral summit is expected to promote further productive work leading to the final restoration of peace and stability in Syria, and the three countries have agreed that the next round of such consultations will take place in Astana in the end of March or the beginning of April.
Regular meetings at the expert level will also be continued with the participation of the guarantor countries' delegations, Syrian parties, government and opposition, as well as UN representatives.