Mozambique goes to the polls in vote that tests peace deal 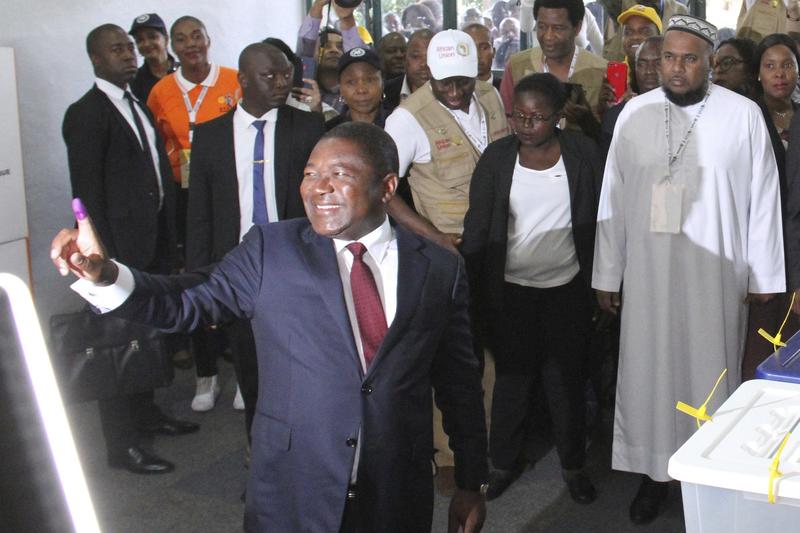 Mozambican President Felipe Nyusi poses at a polling station where he cast his vote in Maputo, Mozambique, Oct 15, 2019 in the country's presidential, parliamentary and provincial elections. (FERHAT MOMADE / AP)

MAPUTO, Mozambique — Polls opened across Mozambique on Tuesday, with 13 million voters registered to cast ballots in presidential, parliamentary, and provincial elections seen as key to consolidating peace in the southern African nation.

For the first time Mozambicans are also electing provincial governors, a key concession to the opposition Renamo rebels. Previously all governors were appointed by the ruling party

Parties' acceptance of the election results is a key test of the ceasefire signed in August between the government and the opposition Renamo rebels after years of skirmishes following a 15-year civil war that killed an estimated 1 million people.

The ruling Frelimo party, which has governed since Mozambique's independence from Portugal in 1975, is expected to be returned to power. President Felipe Nyusi, who voted as polls opened, is expected to win a second term in a vote where insecurity and political tensions might keep some people from the polls.

Nyusi urged Mozambicans to avoid violence — a week after police acknowledged that several suspects in the murder of prominent local election observer Anastacio Matavel were police officers, leading to condemnation from some international vote observer groups.

The president can claim credit for the US$25 billion Mozambique Liquid Natural Gas project, part of efforts to tap substantial deposits of natural gas, but his first term has been overshadowed by an economic crisis caused by a US$2 billion corruption scandal in which companies set up by the secret services and defense ministry secretly borrowed money to set up projects that never materialized.

The opposition Renamo's candidate and new leader Ossufo Momade is expected to benefit from Renamo's popularity, particularly in the countryside.

A beaming Momade held up the inked proof of his vote and called on supporters to participate "massively" in the election. In comments carried by national broadcaster TVM, he also called on "my brother" Nyusi and security forces to respect the popular vote, and he cited the recently signed peace deal.

Momade also held up what appeared to be old, tampered-with ballots, saying, "It's can't continue like this ... We want democracy. We want peace."

Also seeking the presidency is opposition MDM candidate Daviz Simango, the mayor of Beira city, which suffered badly in the devastating Cyclone Idai earlier this year. 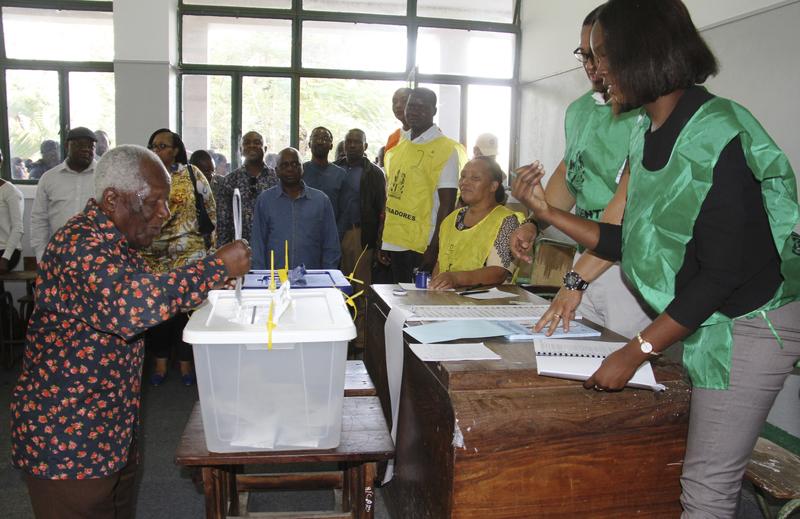 An elderly man casts his vote in Maputo, Oct 15, 2019, in the country's presidential, parliamentary and provincial elections. (FERHAT MOMADE / AP)

The country of nearly 30 million people on the Indian Ocean was hit by Idai and, weeks later, Cyclone Kenneth, raising fears about what climate change would bring to the sprawling coastline in the decades to come. Hundreds of thousands of people are still recovering from the storms and hunger is a growing concern as months remain before the next substantial harvest.

Insecurity also poses a growing threat. At least 10 polling centers were not opening in northernmost Cabo Delgado province as Mozambique's election authority said it could not guarantee safety from attacks by shadowy Islamic extremists, who have killed more than 400 people in the past two years. That means some 5,400 people are not able to vote.

Vote counting will start after polls close at 6 p.m. local time and preliminary results are expected Wednesday, with full provisional results before the end of the week.

A runoff will be held if no presidential candidate wins a majority of the vote.

For the first time Mozambicans are also electing provincial governors, a key concession to Renamo. Previously all governors were appointed by the ruling party.

In 10 of the country's 11 provinces, the governor will be the lead candidate of the party or list which wins the most votes in the provincial assembly election. Maputo, the 11th province and the capital, is both a city and a province and it was decided not to add a governor to the elected mayor.

However, Frelimo has established a new management layer, a provincial secretary of state, which will be appointed by the president and take on many of the powers that governors have had up to now.