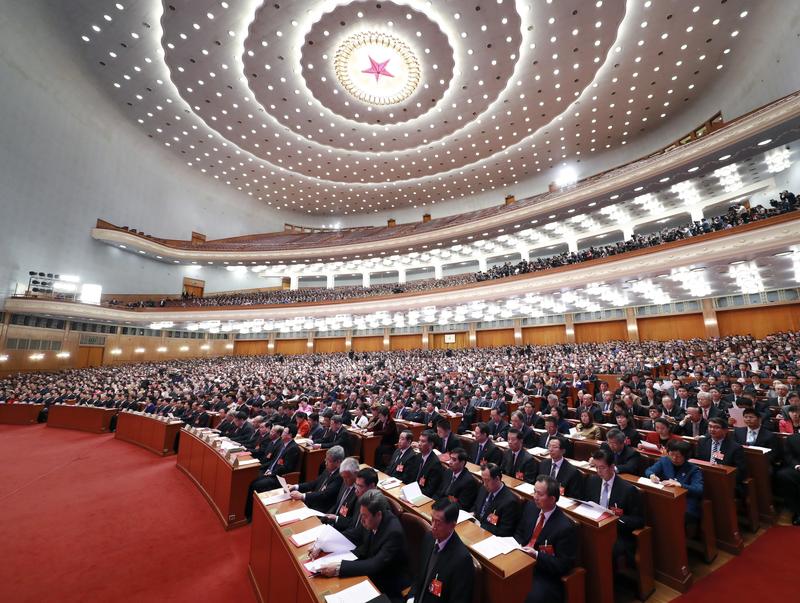 The second session of the 13th National People's Congress (NPC) holds its closing meeting at the Great Hall of the People in Beijing, capital of China, March 15, 2019. China's national legislature passed the foreign investment law at the meeting. (PHOTO / XINHUA)

At around 9 am Friday, an overwhelming majority of the deputies voted in favor of it at the closing meeting of the second session of the 13th National People's Congress (NPC). The law will become effective on Jan 1, 2020.

The new law, which will become effective on Jan 1, 2020, aims to improve the transparency of foreign investment policies and ensure that foreign-invested enterprises participate in market competition on an equal basis

It aims to improve the transparency of foreign investment policies and ensure that foreign-invested enterprises participate in market competition on an equal basis.

The state shall manage foreign investment according to the system of pre-establishment national treatment plus a negative list, the law stipulates.

Foreign-invested enterprises will equally enjoy government policies supporting enterprise development, and will be able to participate in standard-setting on an equal footing and in government procurement through fair competition, according to the law.

The state shall protect the intellectual property rights of foreign investors and foreign-invested enterprises, it read.

With the new law, China will be able to better protect foreign investors' legitimate rights and interests, and create a law-based business environment that is internationalized and enabling

With the new law, China will be able to better protect foreign investors' legitimate rights and interests, and create a law-based business environment that is internationalized and enabling.

The law on equity joint ventures was put into effect in 1979, soon after the country started to implement the reform and opening up policy. The latter two were enacted in the 1980s. Over the past decades, they have provided effective legal safeguards for foreign firms, but are no longer commensurate with the needs of reform and opening up in the new era.

By the end of 2018, about 960,000 foreign-invested enterprises had been set up in China, with the accumulated foreign direct investment exceeding US$2.1 trillion. Foreign direct investment into China has been ranked first among developing countries for 27 consecutive years, according to the United Nations Conference on Trade and Development (UNCTAD).

The new law shows China's will and determination to follow through with reform and opening up in a new historical context, said Wang Chen, vice-chairman of the NPC Standing Committee. "It is a full testament to China's determination and confidence in opening wider to the outside world and promoting foreign investment in the new era."

"For foreign companies in China, I think everyone is waiting for the law to be passed, as it will create a level playing field," said Harley Seyedin, president of the American Chamber of Commerce in South China.

According to a survey of 240 companies by the chamber, the respondents plan to increase their reinvestment budgets from profits in China this year to an estimated total of US$19.4 billion, up nearly 40 percent from 2018.

"The law will give more people confidence in China," said Adam Dunnett, secretary general of the EU Chamber of Commerce in China.