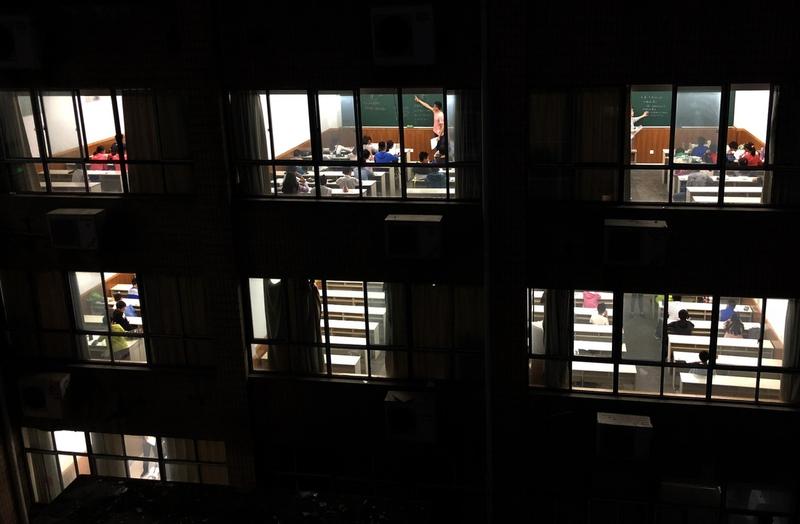 "Tsinghua and Peking universities have to admit students, so why shouldn't one of them be my child?"

That's what many "tiger parents" think when they send their offspring to as many after-school classes as possible, starting at an early age to give their child a head start and gain entry to prestigious universities such as those mentioned above.

In recent years, the government has moved to ease the academic burden on primary and middle school students by cutting class hours, reducing the number of homework assignments, making tests easier and downplaying the importance of exam scores.

In response, ambitious parents have usurped the measures by sending their children to extracurricular classes designed to help them stand out from their peers.

In 2016, there were about 180 million school-age children in China, and more than 137 million of them were taking after-school classes or off-campus training, producing a market worth more than 800 billion yuan (US$117 billion), according to a report by the Chinese Society of Education.

After-school tutoring, usually an expensive exercise, has become such a financial, physical and psychological burden for children and their parents that last year the government introduced a key reform to regulate providers of extracurricular education.

The Ministry of Education held three news conferences related to the regulation of after-school classes last year, while other issues in the sector each averaged just one media briefing across the 12 months.

In February, the ministry and three other government departments issued a guideline to regulate after-school education.

The measure prohibited middle schools from using entrance exams to evaluate prospective students and they were also banned from taking a child's extracurricular qualifications into consideration during enrollment. It also forbade after-school training establishments from exam-oriented tuition methods or hiring teachers from public schools. 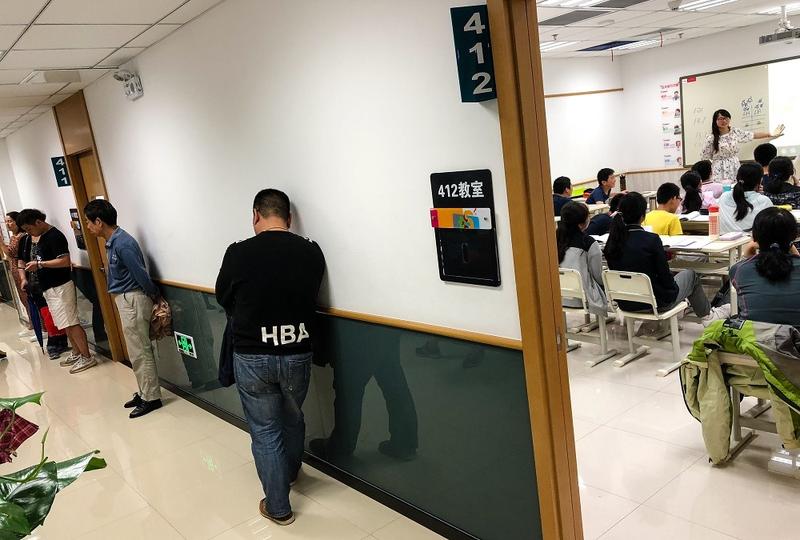 A father waits for his child outside a classroom for extracurricular study at 9 pm in Nanjing. (LI XIANG / XINHUA)

These establishments must not teach anything outside the national syllabus, and must submit their course plans, enrollment targets and class hours to local education authorities for approval.

In August, the General Office of the State Council, China's Cabinet, attempted to ease the heavy workloads of primary and middle school students by issuing a similar guideline aimed at regulating cram schools.

The guideline highlighted activities such as teaching students materials that are too advanced for their school grade in core subjects such as Chinese, math and English. Also, teachers at cram schools must hold recognized teaching certificates and are forbidden from giving students homework. Moreover, classes must end by 8:30 pm.

Certificates and licenses will be reviewed annually, and local government websites will publish lists of certified establishments and name those that fail to meet standards, the guideline added.

The ministry also issued several notices outlining the progress it has made in regulating cram schools, and put pressure on local authorities by naming provinces judged to have made slow regulatory headway.

In its latest notice, issued this month, the ministry said 269,911 after-school institutions, or 98.9 percent of the 272,842 establishments that were found to be problematic, had completed rectifications by Dec 30.

In addition, 401,050 institutions had been assessed as part of a national campaign targeting unlicensed operators and extracurricular programs that put students under too much pressure.

Last month, an online management platform was launched to tighten scrutiny of providers of after-school education, and to allow education authorities nationwide to blacklist poorly-managed outfits and receive public complaints about training programs. 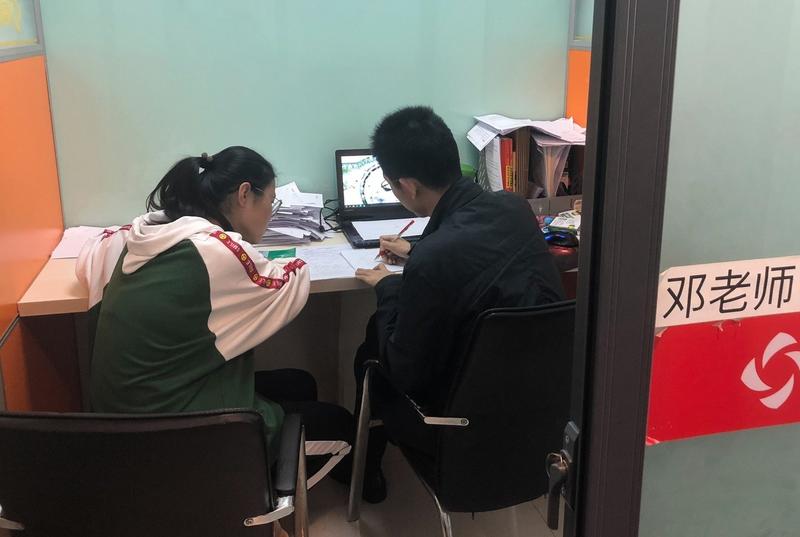 However, despite what many experts have called the "toughest-ever crackdown" on after-school education, these classes have not gone away. Indeed, many of the providers have simply found new ways to survive.

"If the inspectors come, we tell them we are teaching students how to paint," said Wang Jun, head of a small institution in the Haidian-Huangzhuang area in western Beijing that offers extracurricular tutoring in Chinese.

The area, which is close to several renowned high schools, including the High School Affiliated to Renmin University of China and Beijing Bayi School, and prestigious universities, such as Tsinghua and PKU, is home to many after-school establishments that offer intensive tuition to raise students' grades.

Wang conceded that his establishment, which is not certified, does not meet national standards. However, the government's regulation focuses on classes related to core academic subjects, such as math, Chinese and English. That means as long as Wang pretends his establishment only teaches art, the inspectors are unlikely to delve deeper.

To bolster the illusion, he has hung paintings and examples of calligraphy on the walls, and every desk is equipped with a set of paintbrushes. When inspectors visit, there are no textbooks in the classroom so it appears the that students are attending art classes, he said.

However, when the inspectors leave, the teachers return to teaching Chinese, he added.

Wen Zhe started attending classes for the National Mathematical Olympiad at a different after-school establishment in Haidian-huangzhuang when he was in the first grade.

His mother would pick him up after school and they would take a 40-minute subway ride to the area. After a quick dinner, Wen would attend classes for around three hours before he and his mother went home at 9 pm.

The 14-year-old, who is now in the eighth grade, repeated this routine most days for eight years, until the establishment was closed by the authorities in November because it was discovered to be teaching advanced topics to the students.

"I have no interest in the Olympiad, but my mother knows that if I can win a gold medal at the National Mathematical Olympiad, it will give me an advantage over students so I can attend a good high school and university," Wen said.

As a result, when the institution was closed down, he and four other students in the class began online tuition via videoconferencing technology in a WeChat group.

Wen no longer spends hours traveling back and forth, but he said the online classes are not as effective as one-on-one tuition.

"I am not a big fan of the government's policies to reduce students' academic burdens, because there are only a limited number of good universities, which means only those who have studied hard can be admitted," he said.

"When the crackdown becomes less intense in the future, I hope I can go back to the training institution because it has become my second school."

Cui Shifeng, principal of Hefei Hupo Mingcheng Primary School in Anhui province, said the regulation on cram schools is part of the government's "academic burden reduction" policies, which have been around for decades.

The main reason students have to attend cram schools is the unbalanced distribution of educational resources, which prompts parents to do everything they can to send their child to the best schools, he said.

Although the education authorities have been discussing ways to reduce the burden on children since 1955, pupils' workloads have risen over the past few years, according to Cui.

"It's ironic that the education authorities are asking parents to focus less on their child's academic scores and refrain from sending them to tutoring classes, but they continue to admit students to high schools and colleges solely on the basis of scores in entrance exams," Cui said.

As long as the gaokao, the national university entrance exam, is the only way students can gain admittance to higher education, parents will force their children to channel all their energy into their studies, he said.

The only thing the current regulations will achieve is to a make life more difficult for smaller after-school outfits in the sector and force substandard establishments to close, but it won't take long for parents to find new classes for their children to attend, he added.