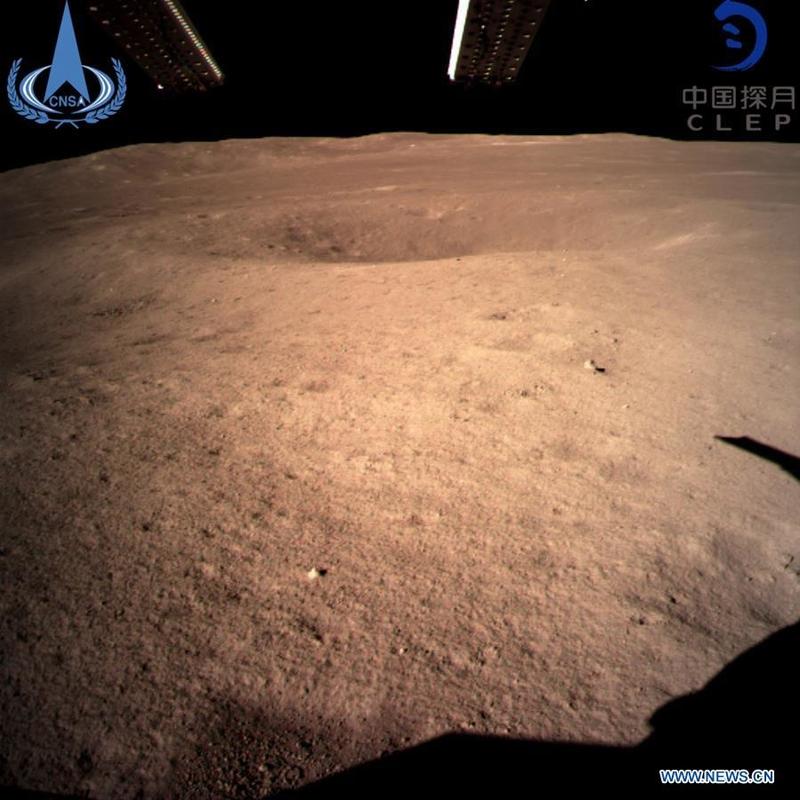 Photo provided by the China National Space Administration on Jan 3, 2019 shows the first image of the moon's far side taken by China's Chang'e-4 probe.  (PHOTO / XINHUA)

BEIJING - China's Chang'e-4 probe has landed on the South Pole-Aitken (SPA) Basin on the far side of the moon, regarded as a virgin territory by scientists expecting important discoveries.

"The far side of the moon has very unique features, and has never been explored in situ, so Chang'e-4 might bring us breakthrough findings," said Zou Yongliao, director of the lunar and deep space exploration division of the Chinese Academy of Sciences (CAS).

The moon and the earth shared a similar "childhood." But the traces of the remote past on earth have been erased by geological activity

As a result of the tidal locking effect, the moon's revolution cycle is the same as its rotation cycle. It always faces the earth with the same side, and the far side was a mystery before the age of spacecraft.

More lunar missions showed the moon's two sides were very different: the near side has more and relatively flat lunar mares, while the far side is thickly dotted with impact craters at different sizes.

Lin Yangting, researcher, Institute of Geology and Geophysics of CAS

Scientists infer that the lunar crust on the far side is much thicker than the near side. But why is still a mystery. Only in-situ exploration might reveal the secrets.

Exploration of the far side might help shed light on the early history of the moon, the earth and the solar system.

The moon and the earth shared a similar "childhood." But the traces of the remote past on earth have been erased by geological activity. "The moon might provide us with some insights to the early history of earth," said Lin Yangting, a researcher from the Institute of Geology and Geophysics of CAS.

The SPA Basin, where the Chang'e-4 probe landed, is the largest and deepest basin in the solar system, with a diameter of 2,500 km and a depth of more than 10 km.

"With the Chang'e-4 probe, we can detect information hidden deeply inside the moon. I believe there will be surprising scientific findings," Zou said.

The rocks on the far side are more ancient. The analysis of their substance composition might help us better understand the evolution of the moon," said Zou.

"The rocks on the far side are more ancient. The analysis of their substance composition might help us better understand the evolution of the moon," said Zou.

Scientists have found evidence indicating a heavy asteroid bombardment event in the solar system around 3.9 billion years ago. And the SPA Basin might be an impact from that period. The exploration might offer clues as to why the bombardment occurred, said Zou.

The Chang'e-4 probe is equipped with instruments developed by scientists from Sweden, Germany and China to study the lunar environment, cosmic radiation and the interaction between solar wind and the moon surface.

Cosmic radiation and solar wind might harm people and equipment on the moon. If humans want to return there, it is essential to investigate the lunar environment and radiation in preparation for the mission.

The far side is such a place, as the body of the moon shields against radio interference from the earth. From there, astronomers can study the origins and evolution of stars and galaxies, peering into the dawn of the universe.

Low-frequency radio detectors, developed by Chinese and Dutch scientists, are installed on the Chang'e-4 lander, a micro satellite orbiting the moon, and the relay satellite running around the second Lagrangian (L2) point of the earth-moon system, respectively.