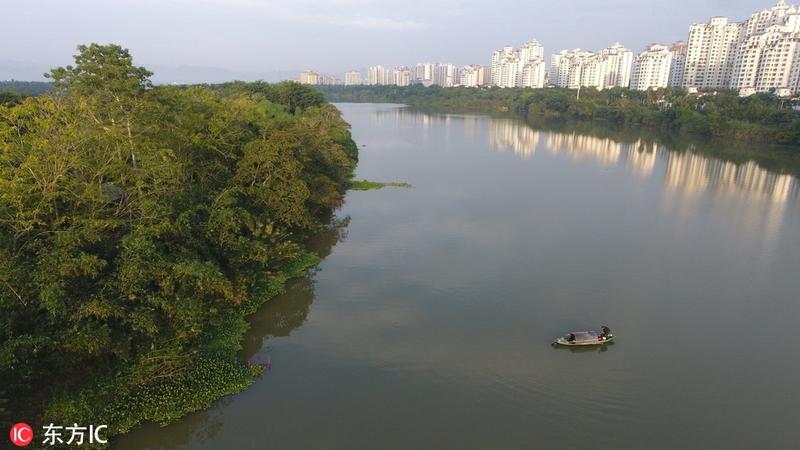 By late November, all sources of pollution around drinking water supplies in Hainan province's prefecture-level cities had been removed - more than a month ahead of the schedule set by the State Council - according to provincial environmental authorities.

The State Council, China's Cabinet, published an action plan in March focusing on environmental protection in areas around drinking water sources. It vowed to root out violations discovered by inspectors by the end of this year.

Inspections this year of 1,586 lakes and waterways that supply drinking water uncovered 6,251 environmental violations nationwide. Of these, 34 were in Hainan, China's southernmost province

Inspections this year of 1,586 lakes and waterways that supply drinking water uncovered 6,251 environmental violations nationwide. Of these, 34 were in Hainan, China's southernmost province, officials at the Ministry of Ecology and Environment said.

In line with requirements of the State Council, the provincial authorities had requested that Haikou, Sanya and Danzhou, three prefecture-level cities on the island, resolve the 34 violations and complete the protection of drinking water sources by the end of the year, said Mao Dongli, deputy director of the provincial Department of Ecology and Environment, the country's first provincial-level body designated for environmental matters.

"Protecting drinking water sources is of vital importance to people's livelihood. It is also an important ecological support and guarantee for the construction of the China (Hainan) Free Trade Pilot Zone (Port)," Mao said.

He said that since April the provincial and local governments of Haikou, Sanya and Danzhou have focused on the improvement of water sources, formulating detailed plans, defining responsibilities and convening on-site meetings to seek effective and innovative solutions.

The problems were mainly the result of domestic sewage discharges, pesticides and fertilizer. Other problems arose from fishing and small-scale livestock and poultry farming.

Mao said his department has dispatched a large number of inspection and guidance teams to help resolve pollution problems.

Untreated domestic sewage and farm chemicals were found earlier this year around the Longtang drinking water source, which supplies about 80 percent of the drinking water in Haikou, the provincial capital.

"From various meetings organized by local officials and posters about daily pollution control, the residents of Tanlian have learned the importance of protecting their drinking water sources," said Zhan Daoqi, head of Tanlian, which has 98 rural households and is located about 1 kilometer from the drinking water sources. "We are happy to see the changes."

Wang Ling, director the Qiongshan district bureau of ecology and environment, said: "With an investment of 3.96 million yuan (US$573,000), the local government has installed facilities for each rural household, free of charge, to collect and treat daily sewage."

Danzhou, in the western part of Hainan, has paid 50 million yuan to build sewage treatment facilities in 49 communities around Songtao Reservoir, the largest reservoir in Hainan, which provides drinking water to 3 million people, or one-third of Hainan's population, the city government said.

Meng Xiaoming, director of Danzhou Ecology and Environment Bureau, said: "To strengthen management and control of the use of agricultural pesticides and fertilizers, Danzhou has closed livestock and poultry farms near the reservoir, and registered all 646 boats that use the reservoir."

He said local fishermen were either given new jobs or encouraged to upgrade their boats to use cleaner fuel.

"Nanfeng, where the reservoir sits, has set up an ecology and environmental office as part of Danzhou's long-term management mechanism, which includes conducting regular inspections of the drinking water sources," said Yang Qiongming, deputy head of Nanfeng. He said the town has completed a plan to set up an intelligent monitoring system to safeguard the reservoir.

The main drinking water problems in Sanya - now an international tourism city at the southern tip of Hainan - were also related to daily domestic discharges and farms. Problems included the spraying of pesticides and use of chemical fertilizers, as well as livestock waste.

All the problems have been remedied in line with approved standards, and long-term plans have been made, including moving residents away from areas near drinking water sources and replacing fruit trees for ecological restoration, said Ji Duanrong, director of the Sanya Ecology and Environment Bureau.

This year's practice has created a vivid demonstration for Hainan's development of an ecological civilization, said Mao. He added that Hainan will establish long-term mechanisms to improve the supervision of drinking water sources and strengthen coordination. He said the province will create a more effective approach to environmental security near drinking water sources.