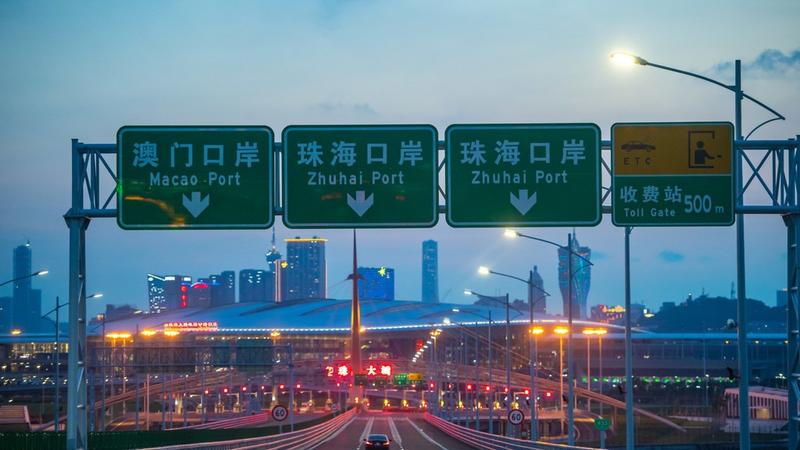 A study reveals that talent is pouring into the GuangdongHong Kong-Macao Greater Bay Area, buttressing the city cluster’s position as a key player in the global digital economy.

The study, by the Tsinghua University’s School of Economics and Management and LinkedIn, reveals that Shenzhen has become a magnet for high-level employees and workers skilled in the “Internet Economy”, and Internet-based trading on the global market.

“The digital economy has gradually become the new driver of the global economy, with the Greater Bay Area playing a central role. The digital transformation of the global economy has also brought significant strategic opportunities to the development of the Greater Bay Area,” said Professor Chen Yubo, head of the Center for Internet Development and Governance of Tsinghua University’s School of Economics and Management.

The digital economy has gradually become the new driver of the global economy, with the Greater Bay Area playing a central role

Chen Yubo, Professor, head of the Center for Internet Development and Governance of Tsinghua University’s School of Economics and Management

Talent is the key to success in the new digital economy. In the GBA, talent is heavily concentrated in the eastern sector: Shenzhen, Guangzhou and Hong Kong. The Greater Bay Area has the highest proportion of highlevel talent in manufacturing, consumer goods, and information and communications technology (ICT), with more than 10% in each of the three industries.

Regarding the education background of the talent in the GBA, over 25 percent have overseas learning experience while more than 30 percent hold a master’s degree and above, and come from diverse backgrounds. Among the ICT-relevant specialties, computer science ranks high. The general-purpose skills include project management and leadership, with a relatively low level of integration of digital skills.

Using big data samples from 439,000 LinkedIn China profiles with bachelor’s degrees or above and 118,000 profiles with ICT and supplementary skills (digital talent) within the GBA, the study benchmarked critical metrics across the GBA compared to other world-famous bay areas. The findings included international status and talent features as well as proposals for the GBA that point to development opportunities.

“Based on LinkedIn’s proprietary Economic Graph, we have extracted talent samples of the Greater Bay Area and presented talent migration flows and skill demands in various ways. LinkedIn users include a high concentration of talent in R&D, management, technology, and business and they are the core component of digital talent,” said Wang Yanping, head of China Public Policy and Government Affairs at LinkedIn.

As an internet company providing business and employmentoriented services with more than 600 million subscribed members worldwide, LinkedIn has developed a wide range of applications on big data and artificial intelligence. So far, in China, LinkedIn has a database with 45 million members, 1.1 million employer companies, 244,000 open positions and 12,000 education institutes.

Since 2017, LinkedIn has been focusing on digital talent profiles and published several reports on the digital economy and talent in cooperation with Tsinghua SEM. LinkedIn’s economic graphs have explored China’s cities where digital talent is concentrated, to the regions with the most dynamic and open economy — the Yangtze River Delta and GBA. The graphs provided insights on the development trend of digital talent.

According to LinkedIn’s statistics, Shenzhen, Guangzhou and Hong Kong are rated as the top centers where digital talent is concentrated, though third-ranked Hong Kong is experiencing an outflow of talent to Shenzhen. Based on the size of the economy, number of permanent residents, total workforce and the stage of industrial and urban development, the three hubs are considered worldclass cities.

Financial studies rank among the top fields among the highquality talent, in keeping with the GBA’s status as a global financial hub. Technical fields such as computer science, electrical engineering are also heavily concentrated, setting a sound educational groundwork for ICT growth.

On Feb 18, Chinese authorities unveiled the outline development plan for the Guangdong-Hong Kong-Macao Greater Bay Area. The plan maps out long-term and short-term directions for the 11-city clusters in building itself into a world-class innovation and technology center by 2035. 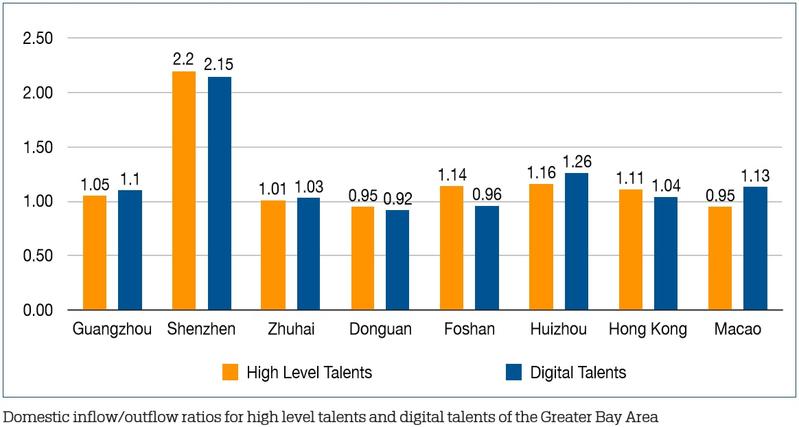 Professor Chen at Tsinghua SEM cited new technologies as another driving force behind the GBA’s development. He listed technological and industrial innovation in big data, artificial intelligence, intelligent manufacturing, financial technology and other fields which provide planning and strategic support for the construction of the GBA.

LinkedIn’s Wang thinks that industry transformation relies on digital talent with a grasp of new technologies. And it is also a benchmark to assess the degree of digitalization in the industry. However, he added that digitalization in the traditional industries such as manufacturing, retail, finance and corporate services is relatively low, suggesting the level of integrated digital economy needs to be improved.

Cities in the GBA show distinctive characteristics of industrial development. Among the cities, Guangzhou has the most balanced talent distribution among industries; Shenzhen highlights the talent in ICT relevant industries while Hong Kong predominantly has talents in the financial and education industries. For Macao, talent is more concentrated in tourism and vacation industries and the other four cities in Guangdong province possess talent mostly in manufacturing and consumer goods industries.

Shenzhen has the highest inflow-to-outflow ratio for attracting international talent in the GBA. The inflow/outflow ratio for high-level talent in Shenzhen is 1.65, and for digital talent 1.68. Hong Kong, Dongguan and Foshan also show healthy inflow/out flow and retention figures. Zhuhai and Macao are still losing highlevel and digital talent to overseas markets. Both cities also show low rates of staff retention.

In terms of attracting domestic talent, Shenzhen runs ahead again with the inflow/outflow ratio for high-level and digital talent reaching above 2.

It’s worth noting that although Hong Kong ranks among the top 3 cities regarding the size of its talent pool, the talent exchange between Hong Kong and other cities within the GBA lags far behind that of Shenzhen and Guangzhou; Macao remains even further behind.

The report suggests that there is more room for the two special administrative regions to strengthen talent exchange with mainland cities, like the recent development of the Qianhai Free Trade Zone which exemplifies the need for further integration between Shenzhen and the SARs. It also highlights the need for favorable policies to incentivize youth from Hong Kong and Macao to come to Shenzhen and develop the “Qianhai model”.

The benchmarking shows that the region possesses great potential in encouraging innovation and entrepreneurship, and the need to optimize the talent structure especially in increasing the talent in senior positions.

Wang told China Daily that in future there might be 400 to 800 million jobs replaced by the digital technologies which require the talent to more proactively seek opportunities and improve the skills required.

On the other hand, he believes that the digital economy has brought multiple possibilities for the career development of talent. With digital economy’s help, talent will not be restricted by geographical locations, Wang added.