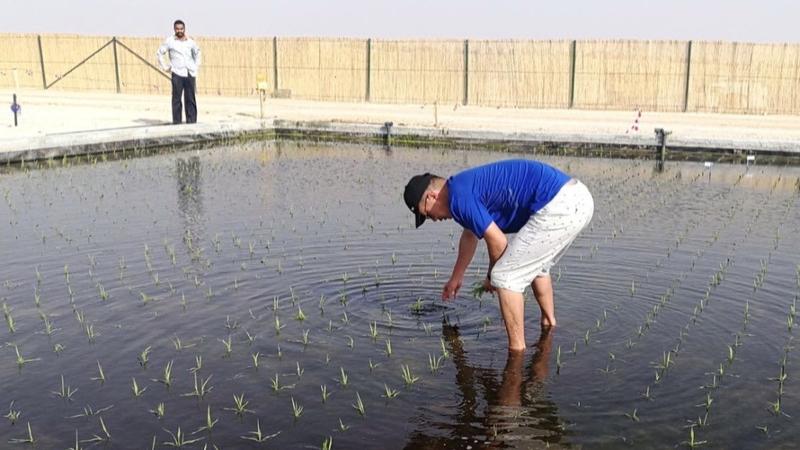 Workers from the Qingdao Saline-Alkali Tolerant Rice Research and Development Center transplant rice seedlings at a Dubai base in the United Arab Emirates in Feb, 2018. (ZHANG MING/FOR CHINA DAILY)

A Chinese research team recently announced that a type of salt-resistant rice they planted in desert areas of Dubai in the United Arab Emirates was estimated to produce more than 7.5 metric tons per hectare.

It marks the first successful experimental planting of rice in a tropical desert, which is expected to enhance global food security and improve the environment in desert zones, according to the research team.

Yuan, also known as the "father of hybrid rice", said the estimated results were better than he had expected

Estimated results showed that two other rice varieties could produce over 6 tons per hectare.

Researchers at the center selected several dozen rice hybrids, planted them in Dubai's suburban area and tested their resistance to drought and salt. The center invited experts from India, Egypt and the UAE to estimate the yields.

Yuan, also known as the "father of hybrid rice", said the estimated results were better than he had expected, adding that he is confident of China's hybrid rice technology.

The Qingdao center will test late-maturing rice in Dubai late next month.

Zhang Guodong, the center's deputy director, said they will select quality rice hybrids according to the test results and find a rice hybrid adaptable to the local climate.

Desert areas in Dubai see temperature differences as high as 30 C between day and night, reaching 50 C during the day with humidity under 20 percent. Sandstorms are also frequent.

The biggest challenge for planting rice is low organic content in the soil, which makes it difficult to conserve soil moisture.

Zhang said rice needs a lot of fresh water, but fresh water there is precious and made by seawater desalination.

"What's more, with too much sunlight, it is likely to see secondary salinization after seawater and fresh water is mixed," Zhang added.

They hope to change at least 10 percent of the UAE's territory into green land through their cooperation in capital, technology and land use.

They also signed an agreement to build a seawater rice research center in the Middle East and North Africa, making "artificial oases" benefit all Arab countries and help them get rid of poverty and hunger as well as improve the environment.