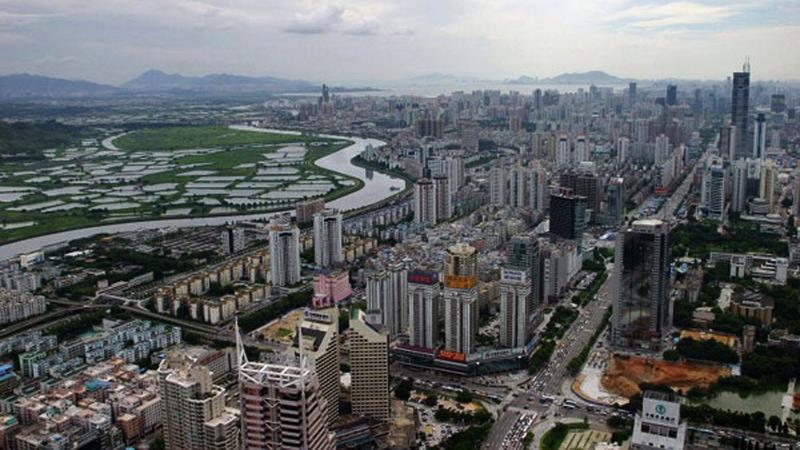 This Aug 18, 2004 file photo shows a view of the skyline of Shenzhen in Guangdong province across the border from Hong Kong. (SAMANTHA SIN / AFP)

However, the Shenzhen government applied a different calculation system. By an average exchange rate of 2017, Hong Kong’s GDP stood at 2.3 trillion yuan, 60 billion higher than Shenzhen’s GDP figure. This made Hong Kong still ahead of its neighboring city.

With a population of 68 million and GDP amounting to US$1.4 trillion, the bay area is an enormous market for our financial and high-end services industries

The per capita GDP of Hong Kong, at US$43,000, remains above Shenzhen’s and is among the highest in the world.

During Wednesday’s 2018-19 Budget announcement the government forecast GDP will increase between 3 and 4 percent this year, driven by a global upturn and strong domestic demand.

In contrast the average year-on-year growth rate in the past 10 years was just 2.9 percent.

Shenzhen and Hong Kong could cooperate in innovation and technology industries and land-resource use and offer more convenience to Hong Kong people, he said.

“With a population of 68 million and GDP amounting to US$1.4 trillion, the bay area is an enormous market for our financial and high-end services industries,” the financial secretary said.

A booming high-tech sector gave Shenzhen, home to 13 million people, its record-breaking GDP, according to the city’s official data. A group of leading mainland tech firms, including internet giant Tencent, Huawei and drone maker DJI, are based in the city.

In just six years, Shenzhen has doubled its economic output. The city’s nominal GDP was 1.1 trillion yuan in 2011.