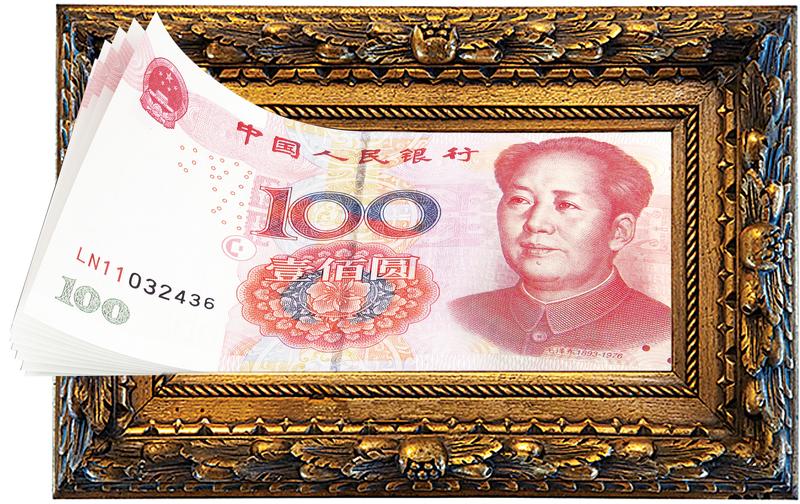 Kylie Ying started her art collection by purchasing a work by abstract artist Zhang Enli about eight years ago. Since then, the Shanghai-based businesswoman has visited numerous galleries, art fairs and dealers to acquire Chinese and Western contemporary art.

“When I make a decision to purchase a piece of work, it means I comprehend the artist’s idea (and that) I believe his/her works make a point in the world we live in,” she told China Daily Asia Weekly.

Ying’s appreciation for the arts started at a young age, influenced by her mother who worked at a national art and culture institution. Her marriage to another art lover deepened her passion for art.

Ying also organizes art fairs in Shanghai and Beijing to connect artists with gallerists and collectors.

She is just one of the growing number of collectors who are boosting China’s influence in the global art scene.

Like Ying, these Chinese collectors are affluent, educated and passionate art lovers. Their presence at art fairs, galleries and auction houses is moving the center of the art universe from London and New York to Beijing, Shanghai and Hong Kong.

“These collectors have a big influence in the (global art) market now,” said Christoph Noe, founder of art advisory firm The Ministry of Art.

The annual report issued in February by Swiss investment bank UBS and Art Basel said that China — now the world’s No 2 art market, second only to the US — posted US$13.2 billion worth of art sales in 2017.

Clare McAndrew, author of the report, describes China’s rise in the art market in the last two decades alone as “phenomenal”.

Speaking to China Daily Asia Weekly, McAndrew attributed this to China’s robust economic growth. This in turn produced Chinese billionaires who have been dominating international art auctions in recent years.

Sara Mao, Hong Kong-based specialist in Christie’s Chinese paintings department, estimated that 80 percent of the auction house’s sales in the last five years came from China. She said most of these Chinese clients are first-time buyers.

Sotheby’s Asia chairman Nicolas Chow said the auction’s sales of Chinese artworks have been growing for the past few years thanks to Chinese collectors.

Julia Ip, a lecturer on art business at The University of Hong Kong, said international galleries and auction houses are now changing their marketing strategy to attract more Chinese collectors.

To illustrate how auction houses are setting their sights on the Chinese market, she cited Sotheby’s announcement in April of the auction of Amedeo Modigliani’s Sublime Nude — which was billed as the star of New York’s May auction season.

Ip said the fact that the announcement was made in Hong Kong — with two Sotheby’s executives delivering the message in English and Putonghua — shows that the auction house is appealing to top Chinese collectors.

Like Sotheby’s, Ip said Christie’s was also marketing to Chinese collectors. Christie’s promoted the Rockefellers’ art collection in Hong Kong by publicizing the family’s philanthropic works in China during the 1890s and early 1900s.

“They’re now paying attention to the Chinese market. (Their marketing) is not even subtle,” Ip told China Daily Asia Weekly.

China’s rise in the art scene may have seemed dramatic as it managed to dislodge the UK as the world’s second-biggest art market in less than five years. But as Noe of The Ministry of Art observes, China’s prominent status in the international art scene is also tied with its rise in the global economy.

“The art market reflects what’s happening in the world,” he said.

China’s rapid economic growth in the last 20 years has captured the world’s attention. Noe said this also sparked people’s interest in other aspects of Chinese society such as its arts and culture.

This is why in the early 1990s, contemporary Chinese art started gaining international attention. A decade later, Chinese artworks would be commanding steep prices at global auctions.

In 2006, avant-garde artist Liu Xiaodong’s New Three Gorges Resettlers was sold at the Beijing Poly Auction for the equivalent of US$2.75 million, a world record price for Chinese contemporary art at the time.

A set of gunpowder paintings by Cai Guo-Qiang sold for US$9.5 million at Christie’s auction in Hong Kong in 2007. Cai broke the record set earlier that year by Yue Minjun. Yue’s 1995 art piece Execution was sold for US$5.9 million at the Sotheby’s auction in London.

But it was not only contemporary Chinese artists breaking records in auction houses. Chinese collectors were likewise making the news, paying top prices for both Chinese and Western artworks.

Wang Jianlin, chairman of the conglomerate Dalian Wanda Group, paid US$28.2 million for Pablo Picasso’s Claude et Paloma at a Christie’s New York auction in 2013. The 1950 portrait of Picasso’s two youngest children was initially expected to fetch between US$9 million and US$12 million.

McAndrew of the UBS-Art Basel report said these billionaire collectors are the key drivers in China’s art market sales. Most of the transactions done in the Chinese market were coursed through these auctions.

And McAndrew does not believe that China’s decelerated economic growth rate — no longer in the double digits — will rein-in Chinese art buying.

She said the Chinese art market is now being supported by a small group of high net worth individuals who pay eye-popping prices at auctions. But she believes it is the expanding middle class that will sustain the art market in the long run.

“It’s the upper middle class that holds the key to really have a substantial art market,” McAndrew said.

She said the United States managed to hold its No 1 ranking in the world art market thanks to its broad middle class segment. It is the middle class consumers that patronize the more affordable artworks priced below US$1 million apiece.

Noe said China’s rising influence in the global art market will also increase the level of art appreciation in China.

Noe said some of China’s top collectors have set up private museums to showcase their collections. Thanks to these museums, the public can view some of the best contemporary Chinese and Western artworks.

He also pointed to the increasing number of galleries, private museums, art fairs and art biennales being held in Shanghai and Beijing. This has transformed these two Chinese cities into key art hubs.

Shanghai’s West Bund houses galleries, cafes and some of the country’s top public and private museums. These include the Rockbund Art Museum, Long Museum and the Yuz Museum.

Beijing is renowned for its two major art districts. The 798 Art District and Caochangdi are home to a clutch of galleries, boutiques, cafes and souvenir shops.

And for an art collector like Ying, Beijing and Shanghai’s growth as art centers is a welcome development.

“What I love about (the Chinese art scene) is the fact that it is active, lively, and ready to create at any minute,” she said.