Syria's Aleppo symbol of Assad's wins and of enduring war

In this July 26, 2019 photo, Syrians wait for a public transportation in Aleppo, Syria. (HASSAN AMMAR / AP)

ALEPPO, Syria — Members of the al-Ali family were walking home from shopping when several shells slammed into the busy street on the western edges of the Syrian city of Aleppo. The blast tore through them, killing 2-year-old Salam and one of her cousins, and incinerated a car nearby with a woman and her infant daughter inside.

It was one of multiple attacks by rebels firing from Aleppo's outskirts that killed more than a dozen civilians last month.

That victory made Aleppo — a symbol of how Assad succeeded with crucial assistance from Russia and Iran in turning the tide of the long civil war, clawing back most opposition-held territory in the country's heartland

Nearly three years have passed since President Bashar Assad's forces gained full control of Aleppo, sweeping out rebels who had held the eastern half of the city through years of fighting.

That victory made Aleppo — Syria's largest city — a symbol of how Assad succeeded with crucial assistance from Russia and Iran in turning the tide of the long civil war, clawing back most opposition-held territory in the country's heartland and ensuring Assad's survival.

But Aleppo is equally a symbol of how Assad has been unable to secure full victory in the war or bring total security to Syria's people — and appears unlikely to in the near future.

Half of Aleppo remains destroyed, much of its population is scattered, and deadly attacks like the July 24 mortar fire that killed Salam — whose name means peace in Arabic — are still common. Aleppo still sits on the edge of the opposition's last major stronghold, a territory stretching across the neighboring province of Idlib and parts of Hama province. From positions on Aleppo's outskirts, rebels frequently fire mortars and rockets into the city's western districts.

Frustrated supporters of Assad call for the army to recapture Idlib or at least push the rebels further west.

"Let it be war," said Ahmad al-Ali, Salam's uncle. The girl's mother was wounded along with three of her cousins. Dry blood stains where the family was hit could still be seen on the pavement days later. Al-Ali said he wasn't afraid of having a full-fledged battle on his neighborhood's doorstep. "Either we all live in peace or — if we die — others will live in peace."

Government forces backed by Russian warplanes have been waging an intense air and ground campaign in Idlib since April 30 — resulting in the death of at least 450 civilians and displacing hundreds of thousands within Idlib, according to the UN's human rights office. So far, they have only managed to take a fringe of villages along the enclave's southern edge, but the campaign picked up momentum last week, with troops drawing close to a major town.

In this July 27, 2019 photo, a Syrian soldier is silhouetted against the setting sun as he stands guard at the main gate of the ancient Aleppo Citadel in Aleppo, Syria. (HASSAN AMMAR / AP)

One objective is to recapture the highway linking Damascus with Aleppo, which runs through opposition-held territory. Doing so would push the rebels back from Aleppo and provide Aleppans with a further bit of normalcy — a better connection to the capital. Opening the highway would reduce travel time to Damascus by two hours, since drivers now must take a longer desert road.

But that would mean retaking a large chunk of Idlib, including several major towns, a fight that could take months and exact a heavy toll. Idlib is dominated by Islamic militant opposition factions, and the rebel territory is crowded with hundreds of thousands of people, including many who fled from other opposition-held areas that fell to the government.

Retaking territory further north is even more out of reach, since areas bordering Turkey are a patchwork of militias and foreign troops, with Americans and Europeans in the east and the Turkish military in the west.

Syria's southern province of Daraa, recaptured by government troops in July last year, is becoming chaotic with assassinations and attacks against government forces inside what were once areas held by rebels.

"It is doubtful if Damascus will ever be able to exert authority over the entire country," said Fawaz Gerges, a professor of Middle Eastern politics at the London School of Economics. "Large swaths of Syria are under the control of rebels, militants, Kurds and foreign forces, including Turkey, Iran, Russia and the U.S. and Europeans."

"Equally important, social reconstruction is a distant dream. The international community will not invest precious resources in reconstruction as long as there is no reconciliation and political transition," he said. "Western powers will do everything in their power to keep Assad from consolidating his central authority over the whole country."

In Aleppo, reconstruction has been limited. Most of the eastern neighborhoods that were taken from rebels remain empty and destroyed.

"We cannot say that this city will easily return to its normal status," said Muhannad Haj Ali, a lawmaker from Aleppo and a member of parliament's national security committee. "It still needs a lot of effort and restoration of security and stability."

Because of the insurgents' shelling, he noted, Aleppo's international airport has been unable to resume flights, even though it has been repaired. 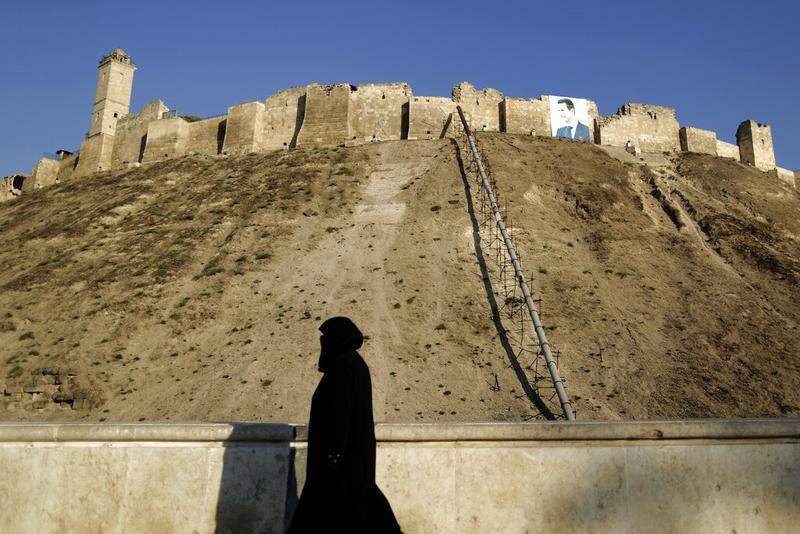 In this July 27, 2019 photo, a woman walks in front of the ancient Citadel with a giant picture of Syrian President Bashar Assad, in Aleppo, Syria. (HASSAN AMMAR / AP)

Aleppo still sits on the edge of the opposition's last major stronghold, a territory stretching across the neighboring province of Idlib and parts of Hama province

Although the western neighborhoods are regularly hit, the rest of the city is safe. People go out at night to enjoy a cool breeze in the city's cafes and restaurants. The poor often go to public spots like parks or Aleppo's famous medieval Citadel.

On a Saturday afternoon, Saleh Haji Ali, who works at a state-owned cement factory, brought his four children to play in the yard below the Citadel. Haji Ali is one of the few people who have moved back into eastern Aleppo. He fled his home in Myasar district when rebels took over the eastern half in 2012, then came back after their defeat and repaired his apartment.

He hopes to raise his kids — three daughters and a son, ranging from 4 to 16 — in Aleppo. "Things have been improving," he said, noting that when they first moved back they were alone, but now some others have returned.

Houshig Mouradian, an architect who belongs to Syria's Armenian minority, was touring a newly rebuilt market nearby in the historic Old City, parts of which were levelled in the fighting. Most of her community has fled the war, leaving for Armenia or beyond. But she won't go.

"We are always optimistic and that is why we are staying in Aleppo," she said.