By Zhou Huiying in Harbin & Han Junhong in Changchun 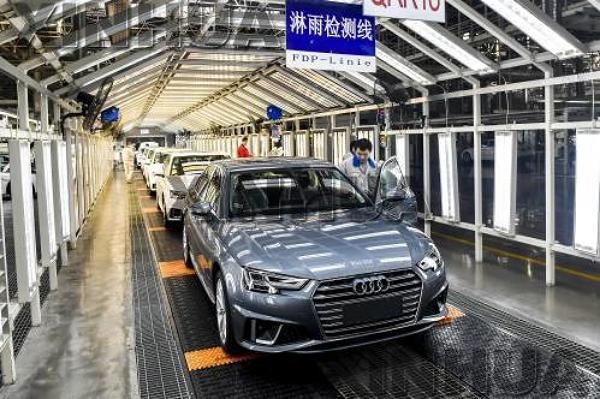 The new technology development center set up by the Sino-German joint venture FAW-Volkswagen Automotive Co Ltd will vastly improve the technology advantage of the overall auto industry and the company, officials said.

Furthermore, it is expected to promote transformation and upgrading of the automotive industry of Changchun and the entire northeast region.

It will also promote research and development of automobile hardware, research on vehicle safety, performance, drive systems, intelligent lighting systems and so on, they said.

Spread over an area of 69,900 square meters, work on the project commenced last month in Changchun, capital of Northeast China's Jilin province.

Officials said the project, with an investment of 960 million yuan (US$137 million), is expected to begin operations in September 2021 and will also help upgrade and improve test equipment and facilities for new energy vehicles.

"The center is an important support for the company to implement its strategy of localization of the whole value chain," said Liu Yigong, general manager of FAW-Volkswagen.

"After completion, the center will become a wind vane of the automotive industry depending on its leading technical indicators and test conditions."

"Furthermore, it is expected to promote transformation and upgrading of the automotive industry of Changchun and the entire northeast region," he said.

Established in 1991, the Changchun-based company has built five manufacturing bases in China. They are in Changchun in Jilin province, Foshan in Guangdong province, Qingdao in Shandong province, Chengdu in Sichuan province and Tianjin.

As China's first modern passenger vehicle enterprise based on economic scale, FAW-Volkswagen has always paid attention to research and development and has formed a complete system from concept development, modeling to structural, parts and vehicle testing.

The company has been increasing its R&D spend over the years and has a development team of more than 2,000 people.

READ MORE: Nomura's China JV to be launched within 2019

"FAW-Volkswagen is one of the most important companies in Changchun and has made a great contribution to the city's development," said Wang Changjiu, secretary of the discipline inspection commission of Changchun.

"The new center will greatly boost the company's research and innovation capabilities as well as help the city become a leader in the automotive industry. The local government will support the further development of FAW-Volkswagen with concerted efforts," he said.