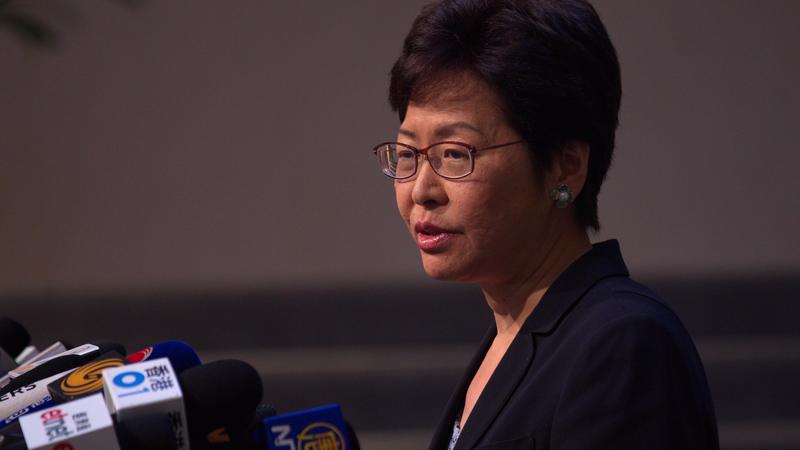 Chief Executive Carrie Lam Cheng Yuet-ngor said on Tuesday that the pro-independence notion in the city’s universities damages the "one country, two systems" framework, breaches the Basic Law and harms the relationship between the city and the central government.

Moreover, it hinders Hong Kong's future development, Lam added. She made the remarks at a press briefing before the weekly Executive Council meeting.

As a civilized community, the society should uphold a bottom line on moral standards

Lam, who is chancellor of Hong Kong’s eight public universities, stressed that the issue is not as simple as questions about freedom of speech or academic debate. She stressed that freedom is confined to certain limits.

"As a civilized community, the society should uphold a bottom line on moral standards," Lam said.

Lam said the “cruel, insulting and intimidating remarks” triggered by pro-independence calls recently are "unacceptable" and detrimental to the city's development. Therefore, they have to stop, Lam stated.

Lam called for social harmony, adding she and her administration are working hard to fix social rifts and do not want to see society remain polarized.

ALSO READ: Official: No room for talk about 'HK independence'

Lam also cares about the SAR's relationship with the central government. She warned that the people of Hong Kong should calm down and not push the SAR to the edge of damaging national sovereignty and security, challenging the authority of the central government and the Basic Law – Hong Kong's sole constitutional document.

Meanwhile, Lam said universities are places for students to study, do research and carry out academic activities. Campuses should never be “hijacked” by minority student activists and turned into a political arena, Lam said.

Thus, Lam said, it is the responsibility of university heads to remind students of their commitments and to remove propaganda materials.

She said she trusts the universities in handling such matters, reckoning that currently there is no need for the government to interfere in the decisions and actions undertaken by the universities’ management.

Lam will leave Hong Kong for her three-day visit to London on Tuesday night.