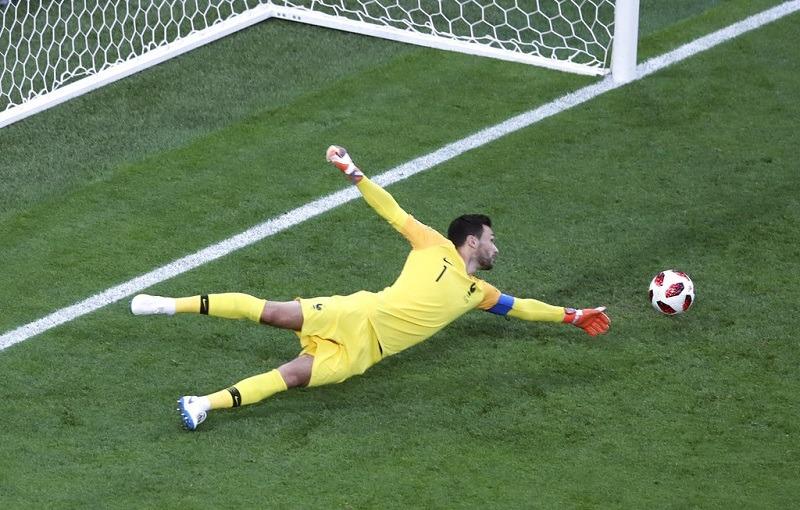 France goalkeeper Hugo Lloris dives to stop a shot from Belgium's Eden Hazard during the semifinal match between France and Belgium at the 2018 soccer World Cup in the St. Petersburg Stadium in St. Petersburg, Russia, July 10, 2018. (THANASSIS STAVRAKIS / AP PHOTO)

ST. PETERSBURG, Russia - France's defense made the difference - on both sides of the field.

Goalkeeper Hugo Lloris kept out the shots and defender Samuel Umtiti scored the winning goal from a corner.

It was France's backline, not its slick attackers, that carried the team to the World Cup final with a 1-0 victory over Belgium on Tuesday.

"This is why football is magical, it gives everyone emotions. It's tough not to give into euphoria, but it's a fantastic moment," Lloris said. "We feared them on set pieces, but in the end it was us scoring from one." 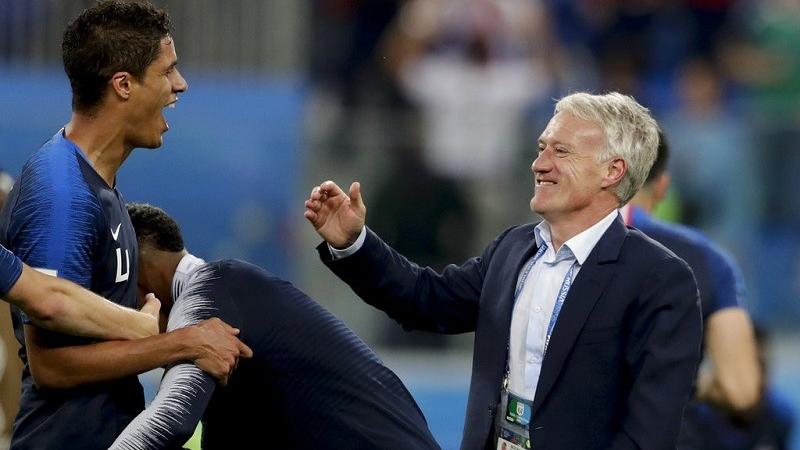 "They have so many athletic players, to have resisted in defense is very good. We had to defend very deep sometimes," Deschamps said. "We came up against a very good Belgium side which controlled the game more than us. But we also hurt them."

Umtiti danced in front of the France fans, while center back partner Varane walked over to them and pumped his clenched fist. Varane was injured when France lost the European Championship final two years ago, and he looks determined to make up for it.

The spotlight has been on 19-year-old sensation Kylian Mbappe in Russia, whose electric pace and skill lit up the tournament. But for the second consecutive knockout game, a defender managed to score when Mbappe couldn't.

Against Uruguay last Friday, it was Varane's header that gave France the lead in a 2-0 win. A few days later, it was Umtiti rising to head home a corner from the right in the 51st minute.

"Enormously proud," Umtiti said. "We worked really hard together, and it's me that scored but we all delivered a big game."

Umtiti showed superb timing to leap above Belgium midfielder Maroune Fellaini - the tallest non-goalkeeper on either side - and power a header past Thibaut Courtois. 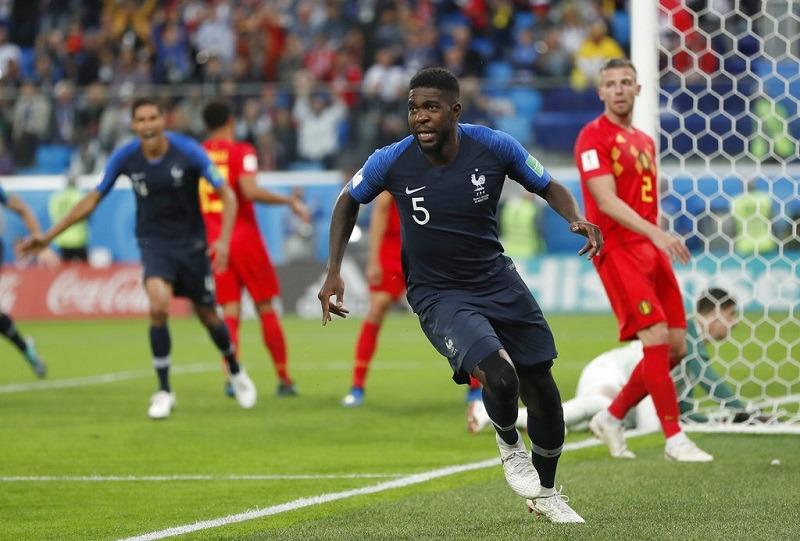 France's Samuel Umtiti celebrates after scoring his sides 1st goal of the game during the semifinal match between France and Belgium at the 2018 soccer World Cup in the St. Petersburg Stadium in, St. Petersburg, Russia, July 10, 2018. (NATACHA PISARENKO / AP PHOTO)

"When you're not particularly tall you need determination and the will to get in front of the opponent," Umtiti said. "The set piece was really well taken as well, and that helped me beat someone as good as Fellaini in the air."

Forward Antoine Griezmann set up Umtiti's and Varane's headed goals up with his cushioned delivery from set pieces. But like Mbappe, he took a back seat against the Belgians as Lloris and his defense starred at St. Petersburg Stadium.

Varane made decisive headers to cut out dangerous crosses and corners, and read to perfection almost every run from Romelu Lukaku and the fleet-footed Eden Hazard. He also compensated for the times when right back Benjamin Pavard was caught out of position, particularly by Hazard, when Belgium dominated the opening 20 minutes.

When France's defense was breached, the agile Lloris was on hand to make decisive saves - just like against Uruguay. He made a superb, leaping stop to his right to palm away a sudden strike from Toby Alderweireld in the 22nd minute that would have gone inside the left post. 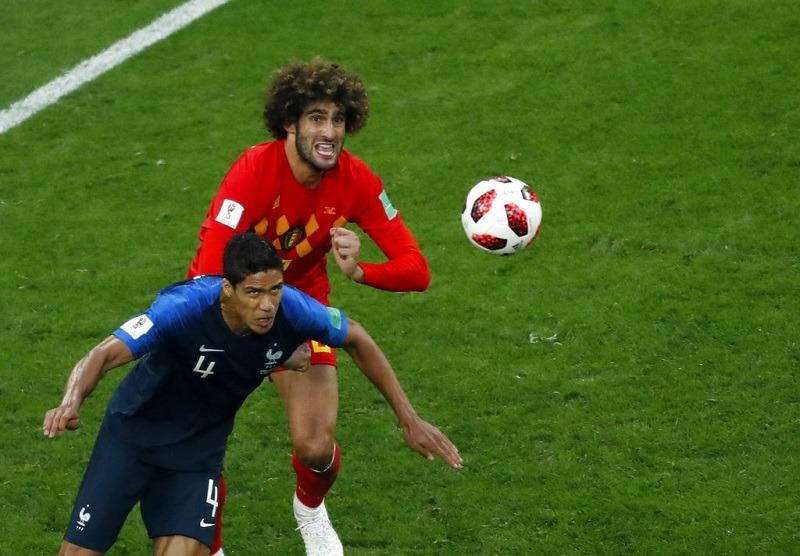 France's Raphael Varane (left) duels for the ball with Belgium's Marouane Fellaini during the semifinal match between France and Belgium at the 2018 soccer World Cup in the St. Petersburg Stadium in St. Petersburg, Russia, July 10, 2018. (PAVEL GOLOVKIN / AP PHOTO)

Midway through the second half, Lloris was there again, springing off his line to punch away a dangerous right-wing cross from Belgium substitute Dries Mertens.

With 10 minutes left and Belgium pressing, Lloris flew off his line to his left to push away a powerful shot from midfielder Axel Witsel.

France won its only World Cup 20 years ago, thanks to a commanding goalkeeper - Fabien Barthez - protected by a rock-solid defense which also chipped in with goals.

In 1998, a defender - Laurent Blanc - scored in the first knockout game to defeat Paraguay in extra time; and Barthez saved France in a tense penalty shootout against Italy in the quarterfinals. Then, right back Lilian Thuram scored the only two goals of his career to help France beat Croatia in the semifinals. 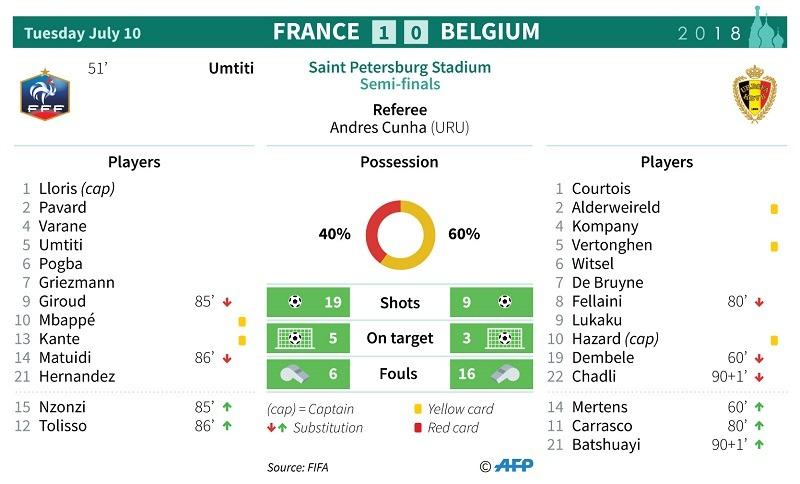 France kept five shutouts in seven games back then. With Croatia or England awaiting in Sunday's final, the formula is one game away from working again.