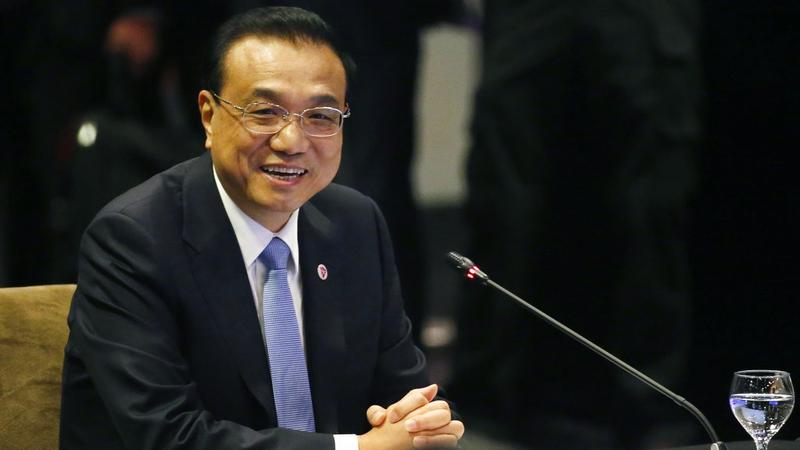 Chinese Premier Li Keqiang smiles as he glances at ASEAN leaders after delivering his statement at the ASEAN Plus China Summit in the ongoing 33rd ASEAN Summit and Related Summits Nov 14, 2018 in Singapore. (BULLIT MARQUEZ / AP)

China hopes to finalize negotiations on the Regional Comprehensive Economic Partnership in 2019 to reach a high-level and mutually beneficial free trade pact, Premier Li Keqiang said on Tuesday in Singapore.

The RCEP, which covers nearly half the world's population and one-third of global trade, has made substantial progress in its negotiations this year, Li told about 500 participants at the 44th Singapore Lecture in the Southeast Asian city state.

The mechanism is based on World Trade Organization rules and is beneficial to regional economic integration, and China will work with other countries to conclude the negotiations based on mutual benefit, Li said.

The global economy and geopolitical conditions are facing complexity and increasing uncertainty, and peace and poverty relief efforts on the world's stage have benefited from multilateralism, the rules-based international order and free trade, Li said. He urged firm adherence to multilateralism and resorting to dialogue to peacefully resolve differences and conflicts under the principles of mutual respect, win-win cooperation and equality for all countries.

China advocates free trade and also fair trade, the premier said. Problems arising from globalization and free trade should be treated in the perspective of long-term development and solved with further reforms and adjustments. However, fundamental rules of multilateralism and free trade should not be violated, he said.

Li reiterated that China will open its door even wider and welcomes Singapore and other ASEAN countries to expand their investments in the world's second-largest economy.

China has made remarkable progress in the 40 years since it adopted reform and opening-up, and has been the largest single contributor to the global economy since the 2008 global financial crisis, Singaporean Vice-Prime Minister Teo Chee Hean said before Li's speech.

Teo said many Chinese companies go abroad to seek new markets, and the country is influential in global development. He said escalating protectionism poses a threat to the multilateral trading system, but China and Singapore enjoy close cooperation and are building a new international land-sea corridor, linking western China and Southeast Asia.

Meanwhile, Li stressed that China firmly adheres to peaceful development and upholds friendship with neighboring countries. China would like to work with ASEAN members to reach a code of conduct in the South China Sea within three years, Li said.