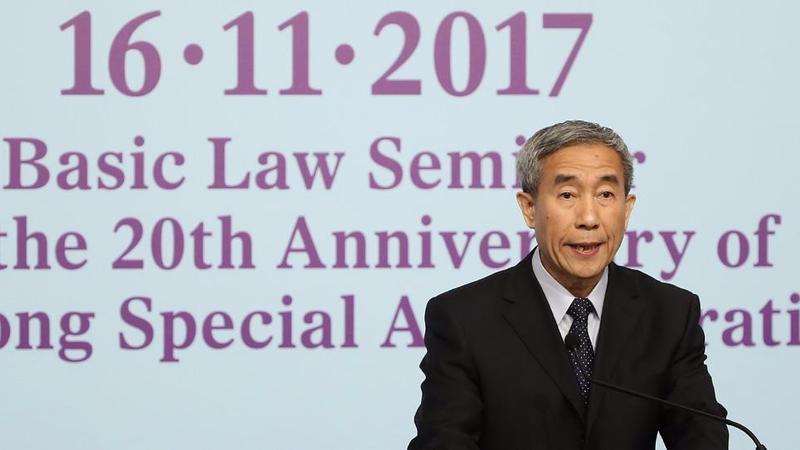 Delivering a keynote speech at a Basic Law forum in Hong Kong, Li, who is also deputy secretary-general of the National People’s Congress Standing Committee, urged the city to actively integrate its own development into the country’s overall development to ensure lasting stability and prosperity.

Only by doing that, Li explained, can Hong Kong perform its obligation in fully and accurately understanding and implementing the “one country, two systems” principle.

By heeding the call, Li believed, Hong Kong will holistically combine upholding the principle of “one country” with respecting the difference of “two systems”. The SAR should also maintain the overall jurisdiction of the central government while keeping a high degree of autonomy.

Elaborating on respecting the Constitution, Li said this should start with an accurate understanding of relations between the national Constitution and the SAR’s Basic Law.

Li said the Constitution serves as the root and origin of the Hong Kong SAR and the Basic Law, laying the foundation for the city’s system and policies.

Without the national Constitution, there would be no Basic Law or the Hong Kong SAR, nor would there be the principle of “one country, two systems”, Li concluded.

Thus activities promoting both the Constitution and Basic Law should be arranged to let Hong Kong people, especially the young, have a full and accurate picture of the country and SAR, Li noted.

When talking about Hong Kong’s responsibility to guard national sovereignty and security, Li described the responsibility as “irrefutable” and said the city should not tolerate any attempts that promote separatism or jeopardize the country’s security, honor and interests.

He was referring to Article 23 of the Basic Law, which stipulates Hong Kong’s constitutional obligation to enact a national security law.

It was obvious to all that adverse consequences, including separatism advocacy on campus, had much to do with the fact the city had not enacted Article 23, Li emphasized.

He said the responsibility should be translated into action that integrates the city’s own development into the nation’s overall development, striving to achieve national rejuvenation and build a strong and prosperous China.

Chief Executive Carrie Lam Cheng Yuet-ngor, who joined Li at the forum, noted that the SAR government and its Education Bureau will adopt diverse methods to strengthen education on the Basic Law.

The government will also work with the Civil Service Bureau to set up a new civil service college to enhance civil servants’ knowledge on the nation’s development, and relations between the central government and SAR.