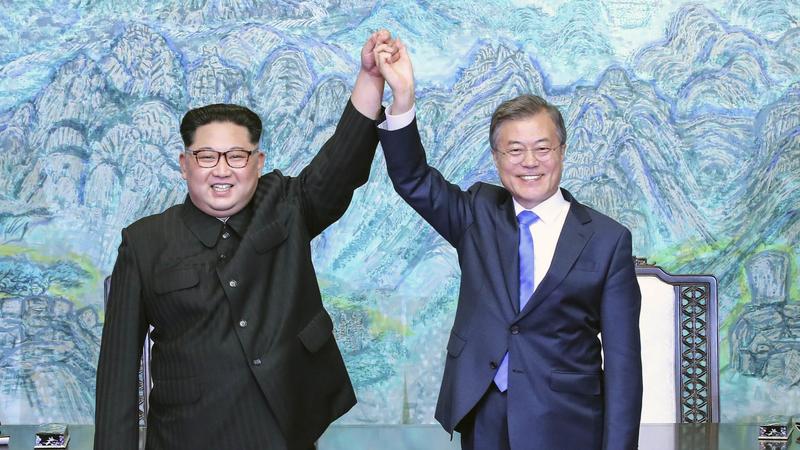 This April 27, 2018 file photo shows leader of the Democratic People’s Republic of Korea (DPRK) Kim Jong-un, left, and President Moon Jae-in of the Republic of Korea (ROK) raising their hands after signing a joint statement at the border village of Panmunjom in the Demilitarized Zone, ROK. (KOREA SUMMIT PRESS POOL VIA AP, FILE)

SEOUL - The Republic of Korea (ROK)'s President Moon Jae-in and top leader of the Democratic People's Republic of Korea (DPRK) Kim Jong-un will hold their third summit in Pyongyang from Tuesday to Thursday as agreed upon during their April summit at the border village of Panmunjom.

Moon and Kim met in Panmunjom on April 27 for the first time, signing the Panmunjom Declaration in which the two sides agreed to improve inter-Korean relations, ease military tensions and completely denuclearize the Korean Peninsula.

For the enhanced ties, the two Koreas opened the joint liaison office at the DPRK's border town of Kaesong, starting the round-the-clock communications channel that is forecast to boost face-to-face working-level talks at any time about sensitive issues.

To increase exchange, ROK and DPRK fielded unified sports teams to international sports event, including the 2018 Asian Games in Indonesia and the international table tennis competition hosted by ROK.

Im Jong-seok, chief of staff for President Moon, told a press briefing Monday that Moon and Kim were anticipated to reach an agreement on military affairs at the Pyongyang summit to prevent any armed conflict between the two Koreas

For humanitarian purpose, the reunion of Korean families who have been separated across the border since the 1950-53 Korean War ended with armistice was held at the DPRK's scenic resort of Mount Kumgang as the leaders of the two Koreas agreed upon it.

To modernize and eventually connect roads and railways along the eastern and western corridors of the peninsula, officials from the two Koreas conducted joint on-spot inspections on the DPRK's roads and railways.

At the Panmunjom summit, Moon and Kim agreed to defuse military tensions between the two Koreas. As agreed upon, all hostile acts have been stopped across the heavily armed inter-Korean border.

A general-level military dialogue was held in late July between the two sides, which shared views over the need to gradually withdraw guard posts inside the demilitarized zone (DMZ), a buffer zone which left the peninsula divided, and jointly excavate the remains of fallen soldiers killed inside the DMZ during the Korean War.

According to local media reports, the two Koreas also discussed ways to disarm the Joint Security Area (JSA) inside the Panmunjom and the ban on the entry of warships into the waters near the western sea boundary.

During their first summit, Moon and Kim agreed to transform the DMZ into a peace zone and the west sea border area into a maritime peace zone.

Im Jong-seok, chief of staff for President Moon, told a press briefing Monday that Moon and Kim were anticipated to reach an agreement on military affairs at the Pyongyang summit to prevent any armed conflict between the two Koreas.

Im said ways to end any threat of war would be on the dialogue agenda to fundamentally eliminate any possibility for military conflicts.

His comment indicated that Moon and Kim were forecast to focus on concrete measures to ease military tensions across the border.

The leaders of the two Koreas agreed to completely denuclearize the peninsula and build lasting peace following their first summit in Panmunjom. The agreement was expected to be reconfirmed at the Pyongyang summit.

The second summit was held in Panmunjom on May 26.