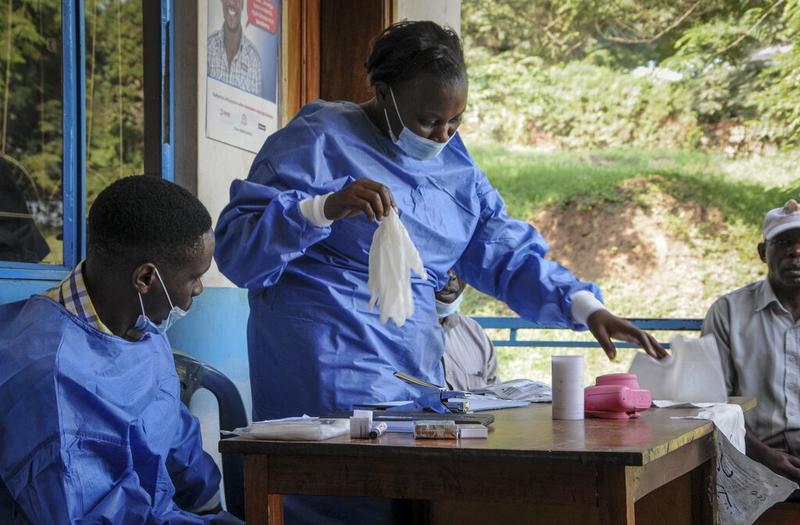 A health worker puts on her protective clothing before vaccinating people against Ebola at the hospital in the village of Kagando, near the border with Congo, in western Uganda, June 15, 2019. (RONALD KABUUBI / AP)

BWERA, Uganda — The isolation ward for Ebola patients is a tent erected in the garden of the local hospital. Gloves are given out sparingly to health workers. And when the second person in this Uganda border town died after the virus outbreak spread from neighboring Congo, the hospital for several hours couldn't find a vehicle to take away the body.

"We don't really have an isolation ward," the Bwera Hospital's administrator, Pedson Buthalha, told The Associated Press. "It's just a tent. To be honest, we can't accommodate more than five people."

Medical workers leading Uganda's effort against Ebola lament what they call limited support in the days since infected members of a Congolese-Ugandan family showed up, one vomiting blood. Three have since died.

The World Health Organization on Friday said the Ebola outbreak is an "extraordinary event" of deep concern but does not yet merit being declared a global emergency. Such a declaration typically triggers more funding, resources and political attention

While Ugandan authorities praise the health workers as "heroes" and say they are prepared to contain the virus, some workers disagree, wondering where the millions of dollars spent on preparing for Ebola have gone if a hospital on the front line lacks basic supplies.

"Even the gloves are not enough," the hospital administrator said Thursday. "I give them out small small." A nurse nodded in agreement.

The World Health Organization on Friday said the Ebola outbreak is an "extraordinary event" of deep concern but does not yet merit being declared a global emergency. Such a declaration typically triggers more funding, resources and political attention. WHO said US$54 million is needed to stop the outbreak.

And yet both Congo and Uganda appeared to lobby against a declaration, with Congo counting the Uganda-related Ebola cases as its own, saying Congo was where the family members began developing symptoms. Ugandan authorities on Friday said they had only one suspected Ebola case remaining in the country.

More than 1,400 people have died since this outbreak was declared in August in eastern Congo, one of the world's most turbulent regions, where rebel attacks and community resistance have hurt Ebola response work. The virus can spread quickly via close contact with bodily fluids of those infected and can be fatal in up to 90% of cases, and identifying people who might have been exposed is crucial.

While Ugandan health workers aren't facing the violent attacks that have killed several Ebola responders in Congo, they remain at risk as they seek to isolate, test and treat for the virus. Basic equipment such as gloves is essential.

At least two nurses at Bwera Hospital might have been exposed as they offered first aid to the infected family. They and some other contacts have since been quarantined in their homes. WHO says at least 112 such contacts have been identified in Uganda since the outbreak crossed the nearby border.

A nurse, who spoke on condition of anonymity to avoid possible retribution, questioned why some people who might have been exposed to Ebola are allowed to stay at home. 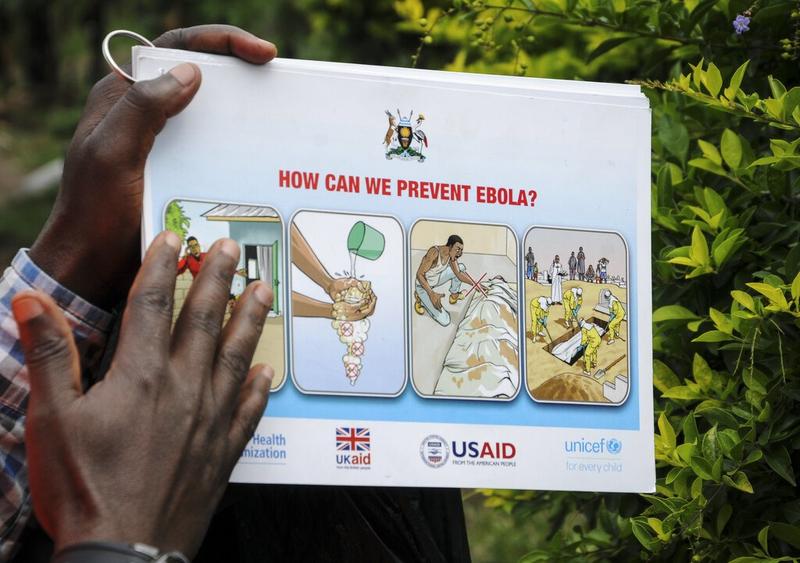 A health worker educates relatives of the 5-year-old boy who became Ebola's first cross-border victim, and other villagers, about Ebola symptoms and prevention, in the village of Kirembo, near the border with Congo, in western Uganda, June 15, 2019. (RONALD KABUUBI / AP)

"I wish we could coordinate," the hospital administrator said of the apparent confusion over how to manage the outbreak.

Ugandan Health Minister Jane Aceng told the AP on Saturday that district officials in Kasese were to blame for limited medical supplies after delaying in submitting their budget.

As Bwera Hospital tried to arrange a safe burial on Thursday for one of Uganda's first Ebola victims, officials quickly realized there was no vehicle. The burial took place hours later and in darkness

"It is clearly the responsibility of the district to order supplies," she said. "If they haven't done the orders we can't supply because we don't know how much they need." As for upgrading the makeshift isolation ward in the hospital garden, she said "it is not economical. It is not cost-effective" to build permanent structures.

Uganda has faced multiple Ebola outbreaks and is a regional leader in battling Ebola, even if this part of the country has never experienced an outbreak. Some Ugandan physicians were deployed to the West African outbreak of 2013-2016, the deadliest in history.

Health workers in this outbreak now have the benefit of an experimental but effective Ebola vaccine that is being widely used, with more than 130,000 doses distributed. Uganda has vaccinated nearly 4,700 health workers, with more vaccinations beginning on Saturday.

Still, corruption is rampant, and many local people are scornful of government officials seen as out of touch.

As Bwera Hospital tried to arrange a safe burial on Thursday for one of Uganda's first Ebola victims, officials quickly realized there was no vehicle. The burial took place hours later and in darkness, which some residents called a sign of the government's shortcomings. 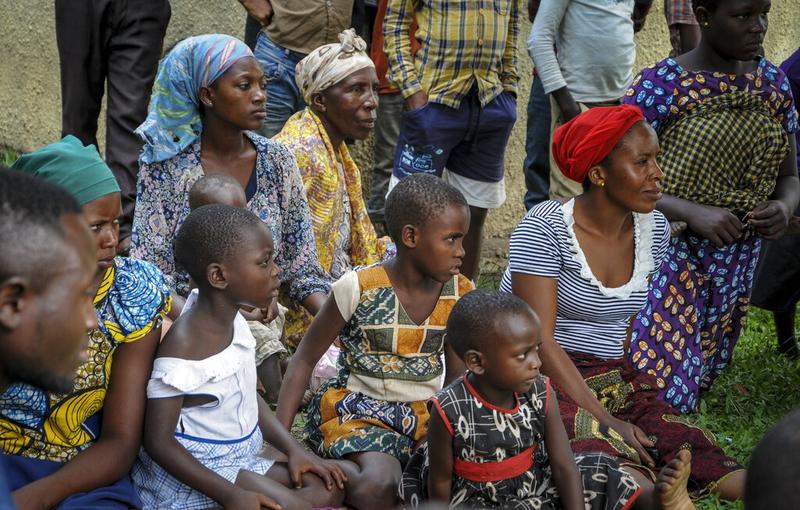 Relatives of the 5-year-old boy who became Ebola's first cross-border victim, and other villagers, listen as village leaders and health workers educate them about Ebola symptoms and prevention, in the village of Kirembo, near the border with Congo, in western Uganda, June 15, 2019. (RONALD KABUUBI / AP)

"This should have been done by the health office, the district health office," said Moses Mugisa, clerk of the border town of Mpondwe-Lhubiriha, who eventually found transport for the corpse.

In addition, he said, voluntary health teams screening for Ebola on the border have gone unpaid for about four months. He criticized the decision of government officials from Kampala, the capital, to visit only briefly after Uganda's first Ebola case was announced.