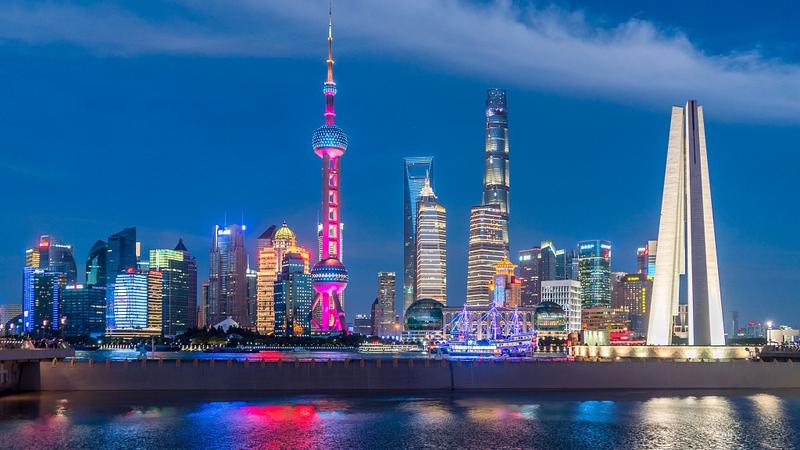 In this undated photo, bright colors glow and reflect on the river in this night view of the Bund in Shanghai. (PHOTO /VCG)

Shanghai municipal government has announced a total of 40 policies to further open up the city's service industry, in the hope of creating a comprehensive round of opening-up of Shanghai and further enhancing the city's competitiveness in the international market.

Five of the newly released supportive policies are aimed at facilitating the city's goal of building Shanghai into an international science and technology hub. Efforts will be made to set up a digital trade transaction and promotion platform in the city.

In addition, the municipal government will study the possibility of designating a cross-border digital trade service zone in Shanghai to allow qualified overseas companies to provide value-added services in this area.

Multinational companies will save much time in applying for business licenses. With the new policy, they will be able to expand in Shanghai at a much faster pace

According to Zhu Min, deputy director of Shanghai Municipal Development and Reform Commission, it is the first time that such a plan regarding digital trade has been initiated at the municipal level.

Another eight policies have been introduced to relax the limits for foreign service providers, including lowering the capital requirement for setting up investment companies in Shanghai and allowing the establishment of wholly foreign-owned performance agencies and travel agencies.

Meanwhile, for the multinational companies which have set up their regional headquarters in Shanghai they are permitted to apply to set up only one business altogether and establish multiple chain operations in the city. Prior to that, each chain operation had to apply for a business license. But with the new policy, they only need to file their operation location.

"Multinational companies will save much time in applying for business licenses. With the new policy, they will be able to expand in Shanghai at a much faster pace," said Peng Wenhao, deputy head of Shanghai Municipal Market Supervision and Administration Bureau.

By the end of July, Shanghai had attracted a total of 696 regional-headquarters and 450 regional R&D centers.

"Shanghai has always been the Chinese mainland city accommodating the largest number of regional headquarters and R&D centers. We can see that substantial progress has been achieved steadily over the past two decades," said Yang Chao, director of the Shanghai Municipal Commission of Commerce.

French industrial group TLD chose to build its regional headquarter in Shanghai 10 days ago. Shanghai's easy connection to the other parts of the Asia-Pacific region in terms of transportation, the large scale of the Chinese market, and the sufficient supply of manufacturing talents in Shanghai, have made Shanghai the perfect choice as the regional headquarters for TLD, said Ing Thomas Dorn, the company's Asia chief executive officer.

Statistics from Shanghai Municipal Commission of Commerce showed that the city attracted a total of foreign contracts worth US$22.9 billion during the first half of 2019, up 6.3 percent from a year earlier. Among the registered amount of contract capital, US$9.8 billion has come in place by the end of June, up 13.9 percent year-on-year. Propelled by technology and commercial services, the received foreign capital in the service industry surged 17.4 percent year-on-year during the first half of this year.