Trump to meet DPRK's Kim, ROK says by May 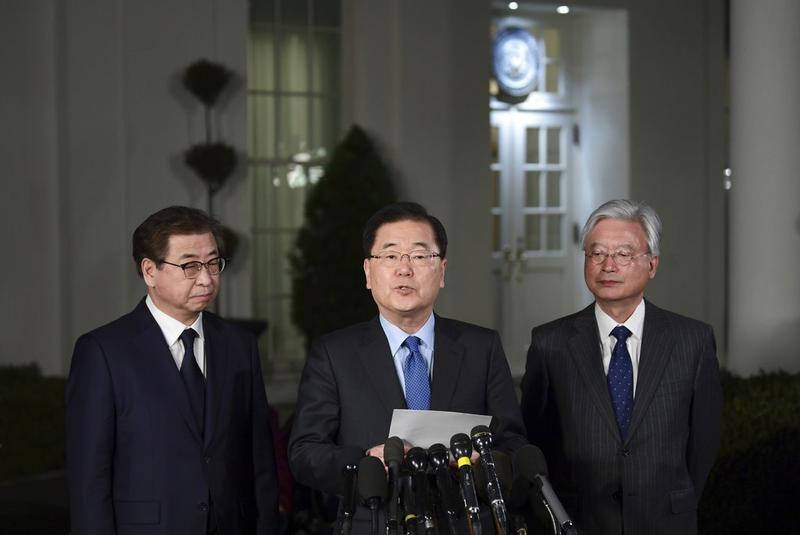 Republic of Korea's (ROK) national security director Chung Eui-yong, center, speaks to reporters at the White House in Washington, March 8, 2018, as intelligence chief Suh Hoon, left and Cho Yoon-je, the ROK ambassador to United States listen. President Donald Trump has accepted an offer of a summit from the DPRK leader and will meet with Kim Jong-un by May, a top ROK official said in a remarkable turnaround in relations between two historic adversaries. (SUSAN WALSH / AP)

WASHINGTON — US President Donald Trump agreed to meet Democratic People's Republic of Korea (DPRK) leader Kim Jung-un by May to negotiate an end to Pyongyang's nuclear weapons program, Republic of Korea (ROK) and US officials said Thursday. No American president has ever met with a DPRK leader.

The Republic of Korea's national security director, Chung Eui-yong, told reporters outside the White House of the planned summit after briefing Trump

The ROK national security director, Chung Eui-yong, told reporters outside the White House of the planned summit, after briefing Trump and other top US officials about a rare meeting with Kim in the DPRK capital on Monday.

Trump posted a tweet soon. "Kim Jong Un talked about denuclearization with the South Korean Representatives, not just a freeze. Also, no missile testing by North Korea (DPRK) during this period of time," the tweet reads. ROK is also referred to as South Korea and DPRK as North Korea.

He added: "Great progress being made but sanctions will remain until an agreement is reached. Meeting being planned!"

White House Press Secretary Sarah Sanders said in a statement that Trump "will accept the invitation to meet with Kim Jong-un at a place and time to be determined."

"We look forward to the denuclearization of North Korea (DPRK). In the meantime, all sanctions and maximum pressure must remain," Sanders added.

Washington has been pushing forward its "maximum pressure" campaign against Pyongyang mainly through economic sanctions and diplomatic isolation. Experts say the strategy may not achieve its expected results but could further escalate tensions.
ROK President Moon Jae-in said Friday said the agreed summit between the Democratic People's Republic of Korea (DPRK) and the United States could become a "historic milestone" for peace on the Korean Peninsula. "If US President Donald Trump and North Korean (DPRK) leader Kim Jong-un meet after the South-North summit, the complete denuclearization of the Korean Peninsula will go into a full orbit," said Moon.

The meeting would be unprecedented during seven decades of animosity between the US and DPRK. The countries do not even have formal diplomatic relations. They remain in a state of war because the 1950-53 Korean War ended with an armistice and not a peace treaty.

READ MORE: ROK envoys leave for US to brief officials on DPRK visit

Chung said he had told Trump that Kim says he's committed to "denuclearization" and has pledged that DPRK will refrain from any further nuclear or missile tests — providing a rare diplomatic opening after a year of escalating tensions over DPRK's tests. The rival Koreas have already agreed to hold a leadership summit in late April.

"He (Kim) expressed his eagerness to meet President Trump as soon as possible," Chung said. "President Trump appreciated the briefing and said he would meet Kim Jong-un by May to achieve permanent denuclearization."

Chung did not say where Trump would meet with Kim.

Trump took office vowing to stop DPRK from attaining a nuclear-tipped missile that could reach the US mainland. He's oscillated between threats and insults directed at Kim, and more conciliatory rhetoric. His more bellicose talk, and Kim's nuclear and missile tests, have fueled fears of war. 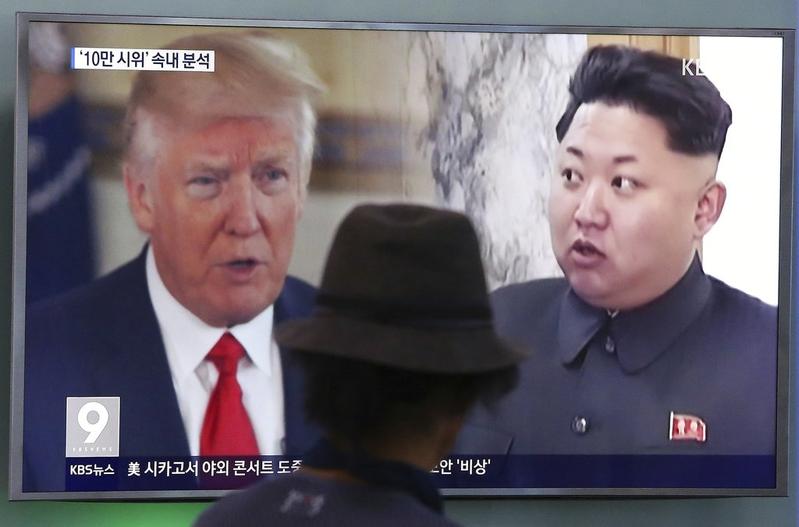 On Tuesday after leaving Pyongyang, Chung had publicized that DPRK was offering talks with the United States on denuclearization and normalizing ties, but the proposal for a summit still came as a huge surprise, and will raise questions about whether the two sides are ready for such a high-level meeting.

The drills were suspended during the Winter Olympics recently hosted by ROK, which provided impetus for the inter-Korea rapprochement. The drills are expected to resume next month. Pyongyang has long protested against the military maneuvers south of the divided Korean Peninsula as a rehearsal for invading DPRK.

Trump had made a surprise visit to the White House press briefing room on Thursday afternoon to alert reporters to the ROK announcement. When asked whether the announcement would be about talks with DPRK, he told ABC reporter Jon Karl: "It's almost beyond that. Hopefully, you will give me credit."
On Thursday, Chinese Foreign Minister Wang Yi urged the United States and the DPRK to hold talks sooner rather than later. He also called for resolving the legitimate security concerns of all sides including the DPRK on an equal footing.