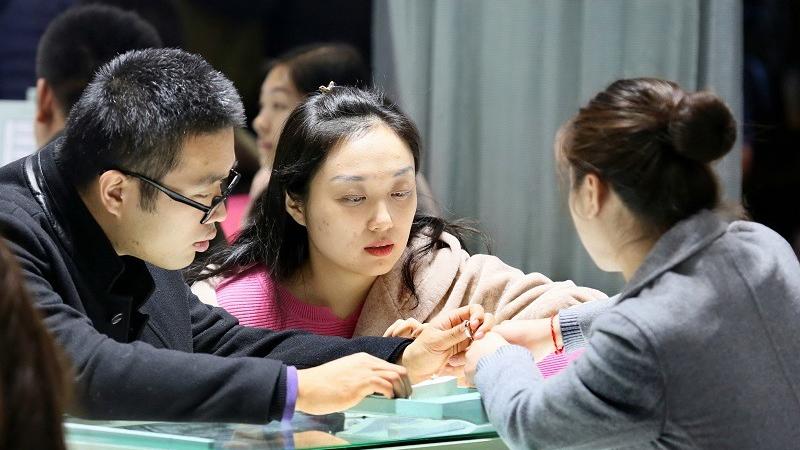 Attendees check out diamond rings at the Beijing Wedding Expo. (PHOTO BY A JING / FOR CHINA DAILY)

Shifting relationship dynamics, changing perceptions of femininity and the fast adoption of e-commerce channels are paving the way for increased diamond jewelry consumption in China, according to an industry expert.

Expanded symbolism for diamond jewelry indicating a wider range of "moments" in life will give rise to more discretionary purchases especially among the country's Generation Z, or those born after 1995, said Mabel Wong McCormick, managing director of Diamond Producers Association in China.

"Diamonds are increasingly being bought to celebrate occasions such as landing a new job, securing a promotion or other personal achievements in a broader sense," McCormick told China Daily in a recent interview.

Diamonds are increasingly being bought to celebrate occasions such as landing a new job, securing a promotion or other personal achievements in a broader sense

A survey conducted last year by the trade group on consumers in Beijing and Shanghai revealed that people's perceptions toward love have seen a departure from traditionally-held beliefs like "eternity and everlasting". While the younger generation still uphold love, they are increasingly embracing the idea to "seize the moment" and feel comfortable spending on iconic items like diamonds for more instant gratifications and self-motivation.

Her words echoed a study conducted by De Beers last year, which showed that Chinese millennials and Generation Z bought nearly 80 percent of all diamond jewelry in China sold in 2017, compared to 60 percent for the United States.

While the giving of diamond jewelry as a token of love and commitment continues to constitute the majority of purchases, it's encouraging to see these additional sources of demand emerge, according to De Beers Chief Executive Officer Bruce Cleaver.

"Apart from marriage - the traditional occasion for diamond gift-giving, a new perception of personal meaningfulness is emerging that is closely associated to joy, confidence and pride in themselves, especially among women. These would lead to greater interest in purchases that can reflect these characteristics," McCormick said.

Formed in May 2015 by seven of the world's leading diamond companies, including De Beers and Dominion Diamond, the Belgium-based DPA promotes the integrity and reputation of diamonds by enhancing consumer demand for, and confidence in the natural stone.

Thanks to e-commerce, in which McCormick believed China "is well ahead of the world", consumers are looking at tangible qualities rather than the brand per se when placing jewelry orders.

"That's really a game changer. With Chinese consumers becoming more pragmatic, it's easy to understand how they are getting more demanding on quality, which will ...make the market healthy and optimistic."

While digital space is far from being the main norm for shopping diamonds, a lot of Chinese would go online to look for information on multiple dimensions of the stones before trying on multiple times in physical stores. And China's advanced seamless online-to-offline scenarios would allow consumers to still place orders through digital means if certain types remain exclusive via internet channels, she noted.

In 2017 China's diamond industry accounted for 16 percent of the US$82 billion global market, up from nonexistence two decades ago, according to De Beers.

McCormick believed transparency is important to the industry traditionally perceived to be "shrouded in secrecy" at least in the eyes of the end consumer. Therefore her association has just released the first-ever Socioeconomic and Environmental Impact of Large-Scale Diamond Mining report in May, which found out that major diamond producers represented by the group have created net benefits of US$16 billion, outweighing environmental and socioeconomic impacts by 17 times.