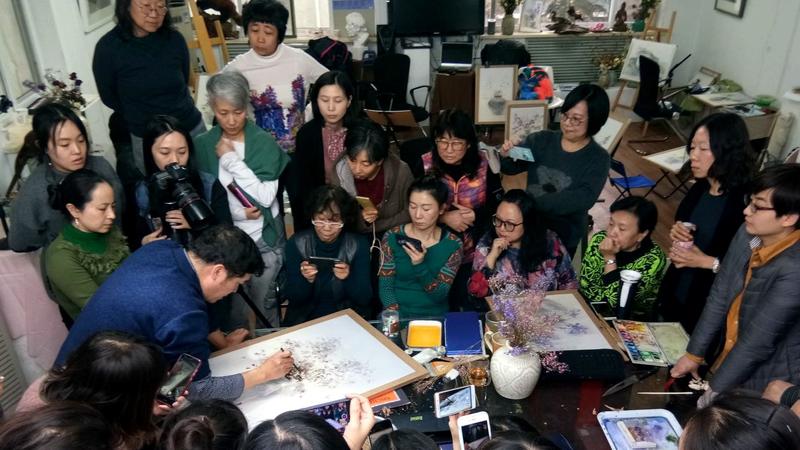 Dong Kecheng, a painter and professor at the Tianjin Academy of Fine Arts, gives students a lesson in painting. (PHOTO / CHINA DAILY)

"Chinese artists of my generation are the beneficiaries of the reform and opening-up policy," said Ye Yongqing, referring to the flood of ideas and fresh perspectives that resulted in a new school of Chinese art.

Chinese fine arts were transformed by reform and opening-up

Ye was exposed to Western influences at art school, an opportunity considered a great privilege at the time. "We started from nothing 40 years ago and established ourselves as professional artists," he said.

Born in 1958 and raised in a remote part of Yunnan province when China was almost totally isolated from the outside world, he recalled the early artistic environment as a "barren desert".

The tide didn't turn until 1978, when the reform and opening-up policy was adopted. The policy promoted a more open-minded attitude toward foreign influences and allowed artists to create distinctively Chinese art, although influenced by Western techniques.

The greater openness also gave Ye the opportunity to take the college entrance examination, or gaokao, to qualify for admission to the Sichuan Fine Arts Institute, where he now teaches.

He took the exam in 1978, the year after it was revived following a decadelong suspension during the "cultural revolution" (1966-76).

READ MORE: Exhibition offers fans tips on how to display their art

Ye was among the first generation of Chinese artists to be exposed to Western art. "In the early years, my works were largely about self-expression. I took art as a tool for communicating internal emotions," he said.

However, inspired by Western influences, he substituted a global vision for his self-centered approach.

"Since most of my works were going to be shown outside China, I felt the need to create for my target audience. I tried to relate to them by discussing universal topics through my art," he said.

Ye counts himself lucky that he was working at a time of greater artistic liberty. "It took me from my hometown to Chongqing, to Beijing and other parts of the world for exhibitions and to exchange ideas," he said.

Now he has studios in Beijing, Chiang Mai in Thailand, and London, and regularly holds exhibitions overseas.

Chinese fine arts were transformed by reform and opening-up, according to Ye. In the '80s, when the policy had just taken effect, artists eagerly devoured foreign influences "because our doors had been closed from the outside for too long and artists were hungry for new ideas".

Between 1985 and 1989, a group of young artists, tired of strict social realism in art, initiated a movement, the"85 New Wave", which campaigned for freedom of conceptual practices in art.

The movement culminated in 1989 when a retrospective exhibition was held. The event created such a stir that it was forced to close after two days as young, avant garde performance artists staged events that challenged old artistic ideas.

"The event was a milestone for contemporary Chinese art. It opened the door for artists to go overseas. Afterwards, exchanges with artists across the world became regular events," said Dong Kecheng, a professor at the Tianjin Academy of Fine Arts, who specializes in watercolors, oils and traditional painting.

In the early 1990s, artists started to venture overseas to hold exhibitions and exchange views, according to Ye.

"But in the meantime, we began to look back to review Chinese traditional arts and re-examine our own artistic and cultural values. Inspired by Western influences, we asked ourselves 'Who are we?' or 'Where do we come from?' and 'How do we preserve our traditions?'" he recalled.

Angela Li, co-president of the Hong Kong Art Gallery Association, said that in the early years, artists were conservative in their choice of themes. Scenic work, including landscapes, was the safe choice.

"A decade ago, contemporary Chinese artists began to touch on sensitive topics, such as humanity, ethics and social reality. The works were no longer typically Chinese, but a fusion of Chinese and Western art," she said.

Now, Chinese people are not only more receptive to Western art but have developed a keener ability to appreciate foreign art, according to Li.

She said few people on the mainland paid attention to contemporary art a dozen years ago when she started work as an art dealer. In fact, most of her customers were Westerners or Hong Kong residents.

Dong, who has devoted half his career to teaching at the academy in Tianjin, said graduation shows always illustrate that new genres, such as expressionism, hyperrealism, impressionism, modernism and postmodernism, have truly arrived, and art education has undergone tremendous changes during recent decades.

"It's fair to say that in the past 40 years, Chinese art has experienced the full process of evolution that took Western art centuries to accomplish." 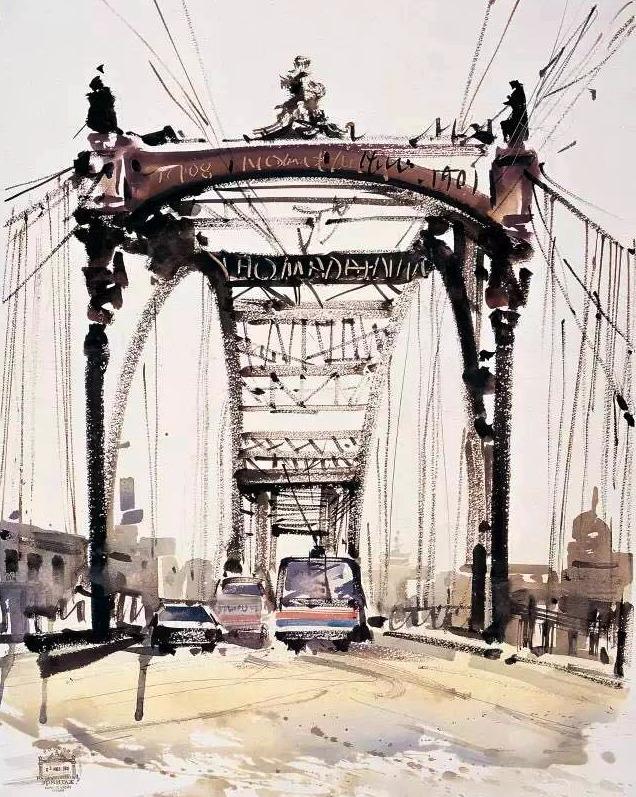 The status of Chinese artists has risen remarkably as a result of reform and opening-up, which is reflected in prices.

Li Keran, one of the most prominent painters of the last century, is a good example. "His works have appreciated by at least 100 percent over the past 40 years," Dong said.

Jonathan Stone, chairman of the Asian Art Department at Christie's in Hong Kong, said prices of Chinese artworks have risen continuously and significantly in the past 20 years.

For example, prices of classical Chinese furniture continue to climb, while European furniture is relatively stable, and the fact that the same object can be sold three or four times over several years is testament to this price appreciation, he added.

In the 1950s and '60s, New York was the capital of avantgarde art because the United States was the world's most powerful country.

Likewise, China's current strength in the art world is an indication of the country's importance, according to Stone, who joined Christie's in 1989, when art market participation was concentrated in Western Europe, North America and Japan. In the past 30 years, art has become a global market, with China becoming a major player.

Last year, more than 30 percent of Christie's global sales came from clients in Asia, with the Chinese dominating that client base, he said. He added that strong purchasing power in China allows more people to appreciate art, and the type of art they buy has changed in the past 15 years.

"Chinese clients used to only buy ceramic pieces from the Ming (1368-1644) and Qing (1644-1911) dynasties. Now, their purchases include classic furniture, jade, archaic jade and lacquer. The past five years have seen Chinese clients buying more impressionist, modern and contemporary paintings, with dramatic rises in sales of European old masters," he said.

Those changes reflect how quickly Chinese clients have learned to appreciate and understand international art, according to Stone.

Mak Ka-lok, a Hong Kongborn conductor and composer, said Chinese music has also benefitted from reform and opening-up. Its advance dates back to the years after the "cultural revolution", when "crossover" music emerged, characterized by a fusion of Chinese and Western orchestral styles. When Mak conducted the Beijing Central Philharmonic Orchestra in 1991, the prestigious conductor Li Delun told him a story.

"Maestro Li told me he longed to conduct Beethoven's Fifth Symphony with his orchestra, but there was a ban on performing it during the 'cultural revolution'. When that ended, his chance came. He recalled that he and the audience sat in the concert hall anxiously waiting for permission from the cultural authorities. After a long time, he received a call saying he could conduct the symphony. He and some audience members wept for joy," Mak said.

The end of the "cultural revolution" was a liberating moment for Chinese musicians and music forms, he added, although some conservative composers stuck to Russian-style music.

Since China began taking a more-open approach to exotic art and culture, talented young composers have struck a chord in the music scene.

They are innovative, with experience of studying overseas, and are developing exciting new Chinese music.

For example, the traditional song Butterfly Lovers has been rearranged and adapted as a symphony. 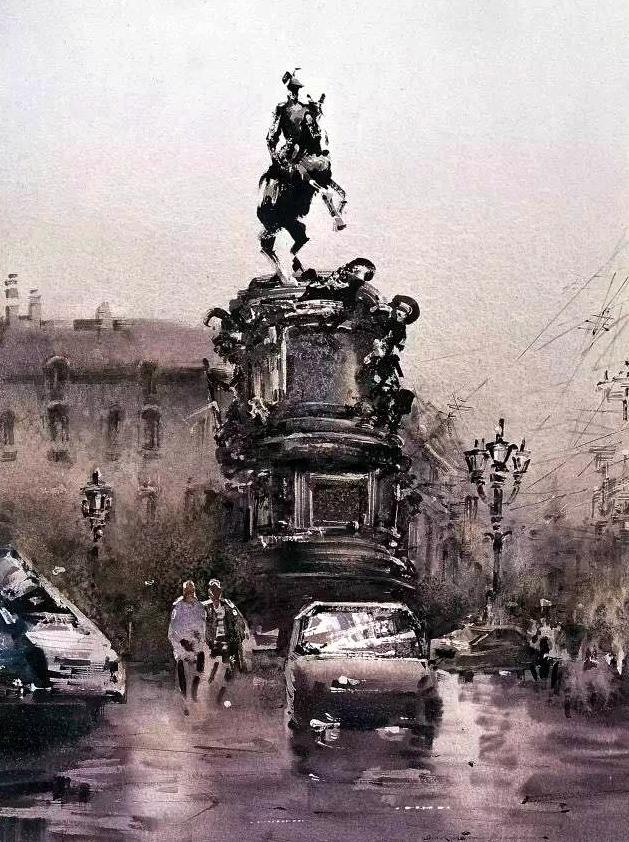 Despite the rise of art sales and the elevated importance of domestic artists, Chinese art is not as globally influential as might be expected, Dong said.

When he visited Western countries to conduct field studies, he quickly realized that Westerners had little knowledge of Chinese art.

"The situation hasn't improved much in the past 40 years. Their understanding of Chinese art is rudimentary, frozen in the years of the Qing Dynasty," he added, noting that in most museums in the West introductions to Chinese art end at the time of the Qing.

He is keen to encourage the younger generation, especially visual artists, to treasure and promote the legacy of Chinese art.

He also maintains that traditional art and culture merits higher regard globally. 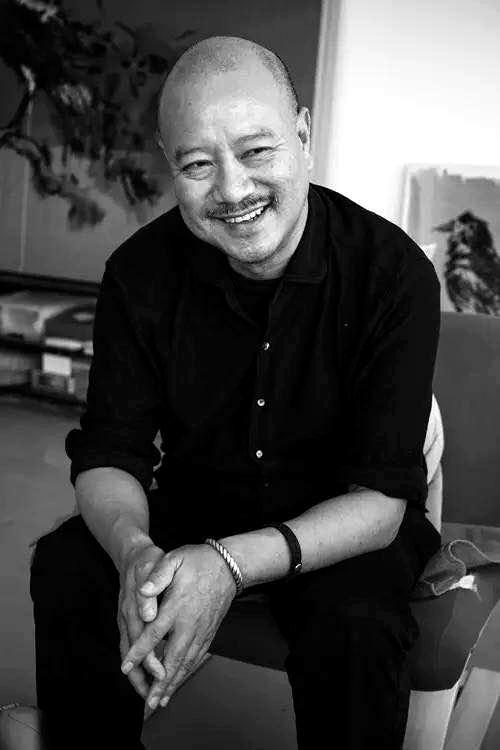