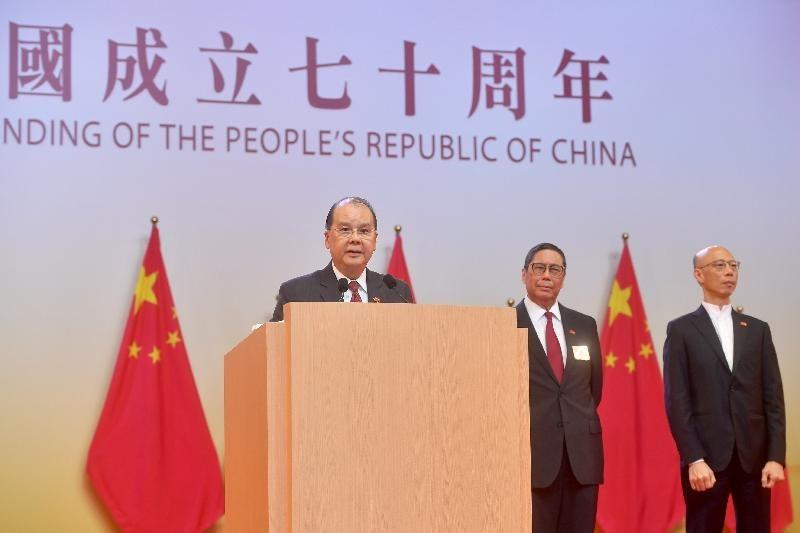 Hong Kong's acting Chief Secretary Matthew Cheung Kin-chung delivers a speech at a National Day reception in celebration of the 70th anniversary of the founding of the People's Republic of China, at the Grand Hall of the Hong Kong Convention and Exhibition Centre, Hong Kong, Oct 1, 2019. (PHOTO / HKSAR GOVERNMENT)

HONG KONG — Hong Kong’s acting Chief Executive Matthew Cheung Kin-chung delivered a speech at a National Day reception here in celebration of the 70th anniversary of the founding of the People's Republic of China Tuesday.

The following is the full text of the translated version of Cheung's speech:

Today marks the 70th anniversary of the founding of the People's Republic of China. I am most pleased to join you all here to celebrate this special and momentous occasion for both our country and for the Hong Kong Special Administrative Region (HKSAR).

Over the past seven decades, our country has marched ahead steadfastly, persevering through severe tests and challenges with indomitable spirit and transforming into an open, progressive, prosperous and rejuvenated nation in steady steps. The achievements are recognised by all and sundry. Today, our country is amongst the world's front-runners in terms of people's livelihood, social development, infrastructure, science and technology and more, as evidenced by the successful launch of the Chang'e Lunar Exploration Programme, the Tiangong Space Station Programme and the first home-made aircraft carrier.  Our country has also emerged as the world's second largest economy and has continuously been the main engine of global economic growth.  The overall strength and influence of our country have enabled it to play a pivotal role globally. Following forty years of reform and opening-up, our country has made great strides, from first standing on its feet to becoming prosperous and now growing strong. The phenomenal advancement of our nation has attracted worldwide attention.

During the glorious course of national development, Hong Kong has leveraged its strengths to serve our country's needs and benefitted from its rapid development. The continuous improvement of the living standards of people on the Mainland and in our city demonstrates how Hong Kong has developed jointly and shared prosperity with our country.

Ever since Hong Kong's return to our motherland 22 years ago, the Central People's Government has been fully committed to supporting the chief executive and the HKSAR government in our effective and proactive governance in accordance with the law. At the same time, the HKSAR government has implemented the policy of "one country, two systems" successfully. Hong Kong's unique strengths under "one country, two systems", coupled with its strong advantages of being backed by our motherland and open to the world, have rendered it the most open and freest city in our country. Riding on the city's well-founded position as an international hub in various areas such as finance, trade, logistics and more, the current-term government has strived to promote the development of innovation and technology in Hong Kong. Our solid foundation in science and technology with a pool of high-quality technology talent is recognized by President Xi Jinping as an important force in implementing the nation's innovation-driven development strategy and building an innovative country. President Xi's full support for Hong Kong's development into an international innovation and technology hub and its integration into the overall national development will provide much room for the long-term development of this city.

While there are unprecedented opportunities for Hong Kong to propel forward, the journey ahead is not without risks and challenges. Since its establishment, the HKSAR government has received the full support of our country under the policy of "one country, two systems" and successfully warded off the impact of the Asian financial turmoil in 1997, the epidemic of severe acute respiratory syndrome in 2003 and the international financial crisis in 2008. During such difficult times, Hong Kong people remained united with unswerving determination to ride out the storm. Hong Kong has grown stronger from the lessons learned and experience gained from these testing times, engendering a better environment to bring up our future generations.

However, international trade relations have become complicated and increasingly tense in recent months. There are also other external uncertainties at play. At the same time, Hong Kong is experiencing social instability. The ongoing and escalating violence of some radical protestors, including unlawful assemblies and blockage of roads, petrol bomb hurling, arson and attacks on other citizens, has not only disrupted social order but also posed a severe challenge to the rule of law, affecting the safety and normal lives of citizens. These further hit the local economy which is already facing downward pressure. Shocked and saddened by the violence that has turned the city that we call home into an unfamiliar place, Hong Kong people desperately yearn to get out of the existing gridlock.

To find a way out of the current difficult situation, the government has shown the greatest sincerity by establishing the Dialogue Office and set in train dialogue with the community in a bid to reconcile differences through communication. The chief executive and all principal officials are reaching out to the community, initiating candid dialogue with people from all walks of life with the aim of exploring possible solutions in concert. The first dialogue with the community was held last Thursday, during which the chief executive and the attending officials listened carefully to the different views raised by the public. The government and the whole Hong Kong community have taken an important step forward. We will continue to engage in dialogue with the community and interact with the public in different forms to truly reach out to the community with an open and humble attitude. We will also be inviting community leaders, professionals and academics to conduct independent studies and reviews of society's deep-seated problems. These include housing and land supply, wealth gap, social justice, opportunities for young people, upward social mobility and public engagement in policy-making. Their recommendations will help the government grasp the crux of the problems and identify practical solutions that can break the deadlock.

Violence and confrontation are never solutions to problems. To resolve the current acute social conflicts, we need more than ever the solidarity of all Hong Kong people to work towards the same goal, seek common ground and accommodate differences. Only in this way can we restore order in the community, rejuvenate the economy, rekindle hope and confidence for Hong Kong to start afresh and build a more promising future for the next generation to seize new opportunities and move upwards.

Meanwhile, the chief executive will deliver her third Policy Address when the Legislative Council resumes business, with a view to demonstrating the HKSAR government's resolve in good governance. The Policy Address will adopt a people-oriented attitude and new thinking in tackling the deep-seated problems and social conflicts that have long beset the general public.

Hong Kong's hard-earned success is founded on the relentless efforts of generations of Hong Kong people for which we should all dearly cherish. Today, Hong Kong possesses both our solid foundation and the full support of our country. What Hong Kong should do is to uphold the "one country" principle while fully leveraging the advantages of "two systems". It is only through ensuring the robustness of "one country, two systems", upholding the Basic Law, defending fiercely the rule of law and maintaining public order, safeguarding steadfastly national sovereignty, security and development interests, seizing every opportunity in developing a diversified economy and cherishing our hard-earned social stability that we can weather every storm we meet, seize any opportunity before us and continue to thrive in the years ahead.

I wish our country prosperity and great success and Hong Kong a stable and thriving future.