Anheuser-Busch InBev NV has pulled off the year’s second-biggest initial public offering the second time around, raising about US$5 billion in listing its Asian unit in Hong Kong two months after scrapping the original share sale.

Shares of Budweiser Brewing Company APAC Ltd were priced at HK$27 each, the bottom of a marketed range whose ceiling was HK$30

The Belgian brewer priced shares of Budweiser Brewing Company APAC Ltd at HK$27 each, the bottom of a marketed range. Still, the sale gives the Asian unit an enterprise value of US$45 billion, helping the parent company reduce its massive debt and laying the groundwork for possible future acquisitions.

ALSO READ: AB InBev to seek up to US$4.85b in Asian unit IPO

The world’s biggest beer company succeeded on its second try after selling Budweiser Brewing’s Australian unit to Japan’s Asahi Group Holdings Ltd. That roughly halved the size of the Asia-Pacific offering but gives investors in the IPO a more focused stake in faster-growing parts of the regional business, with brands like Cass in South Korea and Harbin on the Chinese mainland.

The deal’s revival is a boost for the Hong Kong stock exchange at a time when protests have rocked the market. The sale will propel Hong Kong past Shanghai as the world’s No. 3 market for initial public offerings this year. 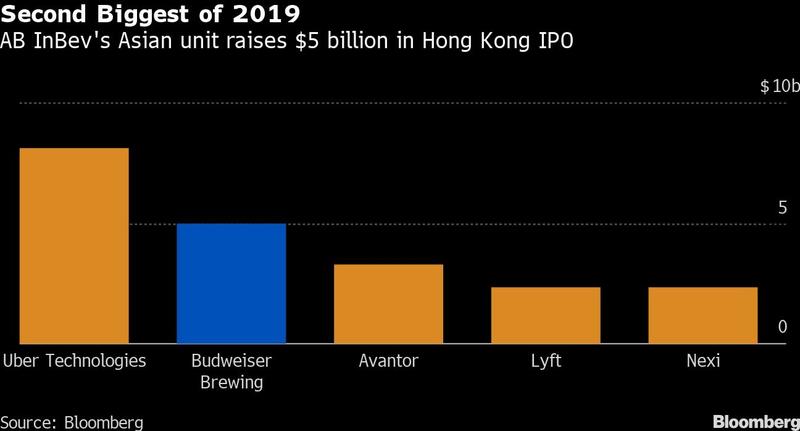 AB InBev traded 0.7% lower early Tuesday in Brussels. The stock is still up by half this year.

Even after investors balked at the previous offering’s valuation, the new listing would be the second-largest globally this year, trailing Uber Technologies Inc’s US$8.1 billion US sale in May. Excluding Budweiser Brewing, companies have raised a total of US$11.1 billion through IPOs in Hong Kong this year, according to data compiled by Bloomberg.

The share sale helps AB InBev pare down its US$100 billion-plus debt pile after its purchase of SABMiller in 2016, letting it accelerate its goal of creating a regional champion in Asia, especially through acquisitions. The company has said all the proceeds will be used to reduce borrowing.

The sale gives the Asian unit an enterprise value of US$45 billion, helping the parent company reduce its massive debt and laying the groundwork for possible future acquisitions

“Whilst we believe the primary reason for the IPO is to accelerate deleveraging, it increases flexibility to do further deals,” Jefferies analysts Edward Mundy and Elsa Hannar wrote in a report. “ABI has traditionally done deals every four years and with synergies coming to an end post-SABMiller, the market will refocus on the next M&A move.”

While the company priced the offering at the bottom end of a range whose ceiling was HK$30, it partially exercised a right to increase the number of shares sold, bringing the total to 1.45 billion. There’s a further option to increase that within 30 days after listing, lifting the amount raised to as much as US$5.75 billion. The Belgian company will retain control of the Asian business.

The sale of the Australian unit to Asahi lopped off about one-fifth of the Asia-Pacific unit, cutting its annual sales to about US$6.7 billion, according to the latest preliminary prospectus. But the deal increased Budweiser Brewing’s 2018 growth rate by more than a percentage point, to 7.4 percent, by removing operations in a more mature market.

The IPO price values Budweiser Brewing at 17 times its forecast 2020 enterprise value to earnings before interest, taxes, depreciation and amortization. That’s slightly less expensive than rival China Resources Beer Holdings Co, which is trading at 18.8 times and is one of the highest valued among Asian brewers. Tsingtao Brewery Co is trading at 13.5 times its forecast 2020 EV/EBITDA, while Thai Beverage Pcl is at 17 times.