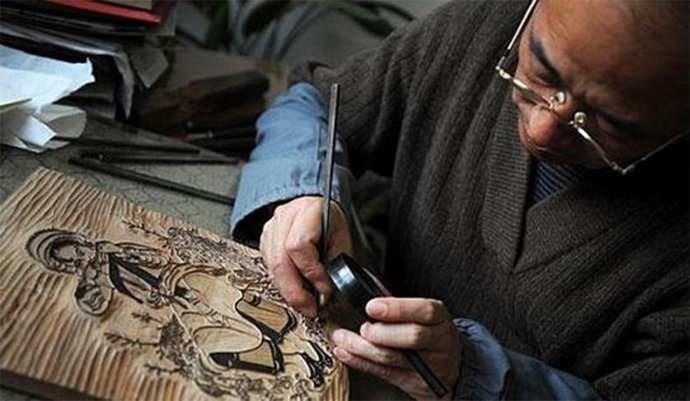 For more than 1,000 years, Chinese artists and craftsmen have sought to replicate the beauty of their surroundings by creating unique works, which feature unique techniques that have played an important role in the country's culture and history. One of those techniques is woodblock printing.

So popular are Chinese woodblock prints that an entire industry dedicated to reproducing the classic works of past masters has sprung up and prospered.

One such company is time-honored Rongbaozhai, a Beijing brand that has been making woodblock prints for more than 100 years. It specializes in reproducing the works of the Chinese masters that have been and gone over the years.

Gao Wenying, 64, is an inheritor of the woodblock printing skills and has been working in the company since 1974.

"I began to learn the skills when I was 19 years old, and it took a long time to reach the required skill level," Gao said.

It took three years of basic training, including making the printing tools and blending inks, she said.

"The time helps improve learners' patience and concentration to strengthen their perseverance in learning the skill," she added.

No matter what innovations we have made, we always prioritize the principle of keeping the creative works in accordance with the original ones.

In 1959, Rongbaozhai began to replicate the 10th-century masterpiece Night Revels of Han Xizai, using a total of 1,667 woodblocks. It took almost 20 years to complete it.

"All the printing steps needed to be identical to the original masterpieces, so it is necessary for a practitioner to understand the aesthetics of each painting," Gao said.

In the past, people learned the skill to make a living, Gao said. "But, nowadays few people want to learn it, so it is more about passion and social responsibility, and passing on the techniques."

At present, there are 46 professionals in the woodblock prints workshop at Rongbaozhai, more than 20 of them engaged in just the printing step.

Zhang Jing, 34, is a student of Gao and has been learning the printing skills for 11 years.

"I was attracted to woodblock printing by accident when I accompanied a Peking Opera performing troupe to Rongbaozhai," Zhang said.

"With a long and rich history, this type of worthy craft needs to follow its tradition," she said.

Zhang began to learn the printing skills from Gao and has been working in the company ever since. "It generally takes about half a year for me to duplicate a middle-sized painting," Zhang said.

As there are few young people wanting to learn, it is not easy to pass on the skill, Zhang said.

"But we will try to insist on working in the trade and to play a good role in the culture's inheritance."

After years of development, Rongbaozhai has nearly 5,000 types of works.

"The company has also invited domestic senior specialists to teach its staff members the color-making skills in a bid to realize specialized inheritance," he said. 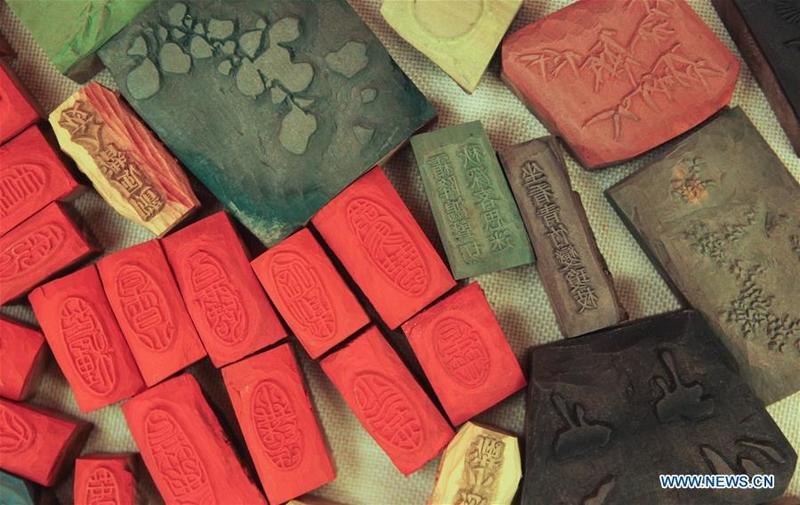 Tools of woodblock printing are displayed at an exhibition in National Art Museum of China in Beijing, capital of China, Sept. 5, 2018. (LYU XUN / XINHUA)

Artists' creative methods and materials have undergone tremendous changes, Li said. "These have made a big difference in our efforts to develop the techniques.

"However, no matter what innovations we have made, we always prioritize the principle of keeping the creative works in accordance with the original ones," he added.

ALSO READ: Craftsman carves out pages that tell a tale of traditional skill

In 2006, the woodblock printing techniques of Rongbaozhai were listed among national-level intangible cultural heritage.

"The costs of inheritance and development are enormous," Li said, adding that it depends on how a company views its own intangible culture.

Trade and production are the impetus to inheritance.

Profit is always the foundation of a company's operation, so it should plan the business well and make full use of the country's policy to support the inheritance, he added. The government needs to support such companies to inherit culture with favorable policies and financial aids, so as to encourage them to insist on preserving and inheriting traditional skills.

"Culture may lose its vitality once it is only displayed at a museum. It should be close to people's lives and meet their consumption needs," Qiao said.

Each type of traditional craft has changed a lot from its origin to now because of changes over time, Qiao said.

"There is no common mode for all companies to adopt to inherit the culture; but, they should promote them with innovation."

In response, the center is striving to help inheritors and companies to inherit culture through projects, as well as providing expert guidance.

A product of inheritors should have a proper market value so that people can have greater motivation to learn, he said.

"Trade and production are the impetus to inheritance," he added.