Editor’s Note: One of Hong Kong’s foremost artists, Lam Tung-pang sees himself as an interpreter of the things that life throws at us. In an exclusive interview with China Daily Hong Kong, Lam shared some of the ideas informing the disarming naiveté in his works. 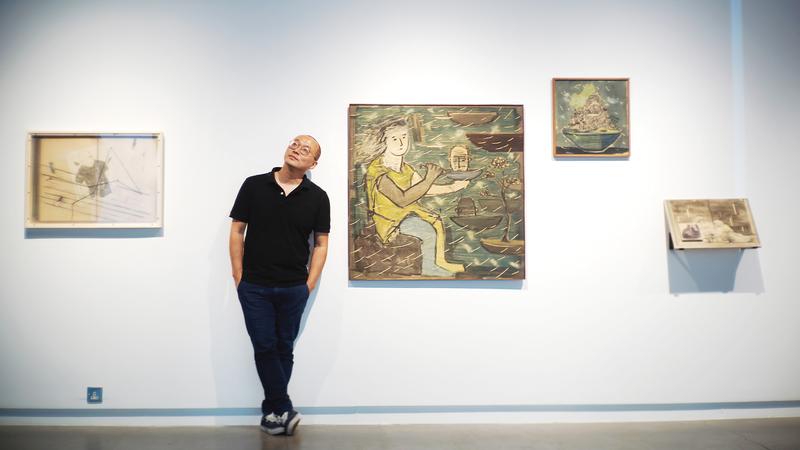 There are many references to the written word in your ongoing show, Saan Dung Gei (mountain cave chronicles) — described as a non-linear travelogue in the curatorial statement. For instance, you have made charcoal drawings on the pages of physical books,  and then UV-printed these on plywood. It’s like you’re bringing the apparatus of writing into the realm of the visual arts…

As an artist I sometimes pretend to be a narrator, not necessarily of stories with linear plots, though. I see myself as both a writer and a reader of what I create. So I have used the motif of the physical book in my art like a sculpture. For example, the books I have painted on are opened at a certain page. You can see the outlines of other pages, but are unable to read this book beyond the two pages that appear in the image.

The idea came to me after I found a Japanese book in a library. I don’t speak the language and yet I turned the pages from start to finish. Certain Japanese characters are somewhere between simplified and traditional Chinese characters. So I could read the Japanese characters, partially, in my own way, although my reading was far from what they meant in Japanese.

So I thought why not let the viewers create their own stories as they walk through this exhibition? Certain incidents, emotions and experiences accumulate in our brain over a long period of time and we need a spark to set it off.

I guess for you it was the ride you took on the high-speed rail link in November 2018, travelling from Hong Kong to Beijing…

It was quite an experience going inside the tunnel, journeying for 20 minutes in total darkness. You are in your hometown and yet you do not get to see it. This was so different from the earlier 24-hour train journey from Hong Kong to Beijing where one got to enjoy the changing scenery. The change of landscape felt like a change in the body after a surgical procedure. Surgeons conducting such a procedure could either save the patient’s life or fail to do so.

It seems the idea of the co-existence of conflicting possibilities is at the core of this show. Many of the images show a black hole in the mountains. But from another perspective the dark circle could in fact be the moon or another planet in the sky, and from yet another, if one were to imagine looking down on it from a height, it could be a deep well.

For me the two possibilities of a life getting saved and pushed towards its death following a surgical operation have always co-existed. For the same reason there are two parallel entrances to the show. You can choose the one you like and take in the show in any order you like.

I like the way you have used motifs from classical literati paintings — craggy hills, waves in neat folds etc. — and arranged them in a bowl like a pile of noodles. So it’s not only about the co-existence of different perspectives, but also of different artistic styles from different time frames — cutting across genres…

The idea behind putting landscapes in a bowl of noodles is to underscore the point that the image is man-made, and the artist can in fact hold it in his arms. I wanted to use familiar tropes from different sources to create a new, previously-unknown landscape.

There are celebrated examples of artists who had fun with the idea of multiple realities captured in the same frame, from M.C. Escher to William Kentridge. Were you inspired by any of them?

I quite like William Kentridge’s video art and drawings. But talking of inspirations, I like to rely more on lived experiences. In art school one learns about the works created by the great masters. Life experiences do not seem to figure in our education system. I think learning from life is the most important part of an artist’s education. I do think for an artist it’s crucial to draw from life experiences to be able to give shape to one’s language of artistic expression. While it’s important to learn from the masters, it’s equally important to draw inspiration from the times we live in.

Saan Dung Gei seems like an extension of your earlier show, The Curiosity Box, which too is an intricately-detailed, non-linear visual narrative with you, the artist, at its center…

This is the first time I have worked in different media (paintings, video, plywood sculptures, kinetic installations, scale models, found objects) toward a show in a gallery space. I did something similar in The Curiosity Box but that was in an alternative space — a love hotel. If The Curiosity Box was like being on the run, Saan Dung Gei is like slowing down and reflecting on the miles I have accumulated.

I have always been seen as a painter, even when I used video projections in my work. I wanted to break away from that perception. Saan Dung Gei marks both a departure from being perceived as a painter and also an arrival in a new space as an artist working across different media.

I usually model the figures in my works after myself, but this time I wanted to draw someone else. Doubtless, it’s my story, but I also wanted to take a step away from myself and create a distance between the experience and me, the artist. I would like to open possibilities of my personal experience taking on a universal relevance.

Innocence and a sense of wonder are the hallmarks of your artistic ethos. Even the humor in your works is hardly ever satirical. How effective is this approach in trying to make sense of the world and your place in it as an artist in these cynical times?

Well, innocence can come from ignorance. I would prefer to be in the know and yet live in hope. I want to be hopeful with a mature understanding of things. I am active as an artist because I live in hope.

Would you like to tell us about the use of old toys and discarded furniture in your works?

Used objects are a repository of memories. For example, the train circling around a wall in Saan Dung Gei is invested with a child’s memories. There are many other elements in this show — the rotating kinetic projection, plastic toys, stools — that have been used before. I asked for the marks made on the floors by the technicians who came to put up the big screen to remain there. I wanted the signs they use to measure things to become part of the show. It shows the existence of other people in this space and the memory of them contained in the traces left behind.