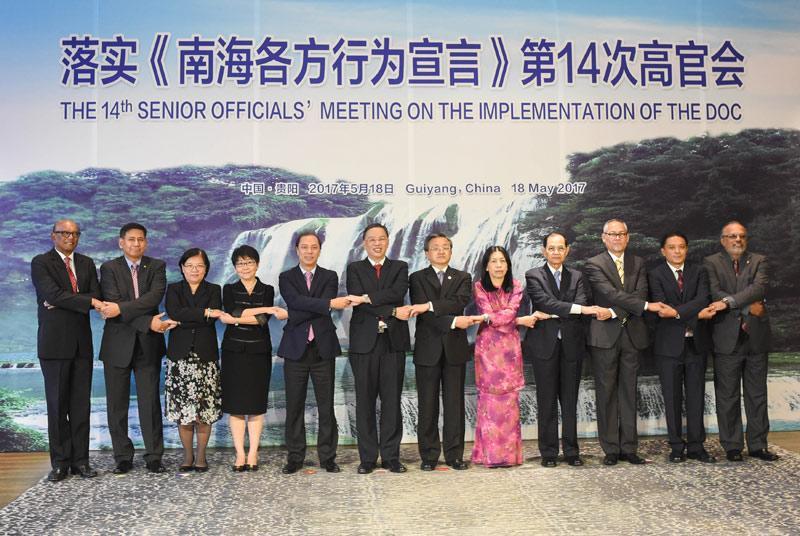 The 14th senior officials' meeting on the implementation of the Declaration on the Conduct of the Parties in the South China Sea (DOC) is held in Guiyang, China, on May 18, 2017. (Xinhua)

GUIYANG - Senior officials from China and ASEAN countries Thursday agreed on a framework for the Code of Conduct (COC) in the South China Sea.

The consensus came during the 14th senior officials' meeting on the implementation of the Declaration on the Conduct of the Parties in the South China Sea (DOC).

The approval of the framework was reached earlier than scheduled

The approval of the framework was reached earlier than scheduled, Liu told the press after the meeting, adding that according to the work plan, China and ASEAN countries were expected to finish consultation on the draft framework for the COC by the first half of this year.

The framework, which represents a crucial phased result in the entire COC negotiation process, has laid a solid foundation for further negotiations, Liu stressed.

Liu said all parties have vowed to continue to constructively advance the negotiations toward the early conclusion of the COC.

During the meeting, all parties also agreed to continue to implement the DOC and reaffirmed plans to solve disputes via negotiation, manage differences with a regional framework of regulations, deepen maritime cooperation, and move forward COC negotiation to safeguard peace and stability of the region.

The meeting approved a paper on the establishment of three technological committees, agreed on outcomes of the trial application of the China-ASEAN senior diplomats' hotline platform, and updated the 2016-2018 work plan.

This year marks the 15th anniversary of the signing of the DOC. All parties pledged to implement the DOC to build a South China Sea environment of peace, friendship and cooperation

Prior to the meeting, the 21st Joint Working Group meeting on the Implementation of the DOC was held.