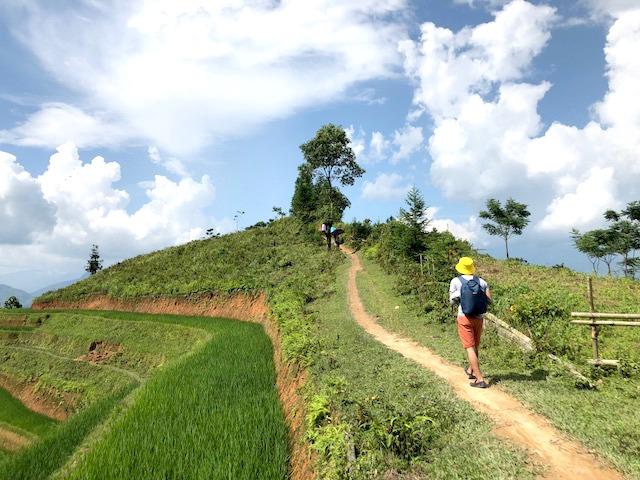 In this undated photo, a traveler treks from Suoi Thau to Ban Luoc commune, on one of the most beautiful trekking paths in Hoang Su Phi district, Ha Giang province, Vietnam. (PHOTO / VIET NAM NEWS)

HA GIANG, Vietnam — As we trekked the winding dirt path from Ho Thau commune toward Ban Luoc, we were surrounded by the immense views of the terraced fields in Hoang Su Phi district, Ha Giang province.

Each hill was covered in lush greenery, bearing enough water to plant rice for the people of this land. It’s an amazing view of how people can make miracles out of their daily workload.

The quick shower stopped before we started our trekking tour and the sky could not have been bluer along the road. Stepping on the slippery path, when we look up, a wonderful view meets our eyes. The sa moc, evergreen pine trees, are dotted along the way, like a scene from an Alpine postcard.

It reminds me of the little girl Heidi and her life with her grandfather. I would read the Vietnamese translation, titled Friendship, when I put my kids to bed. Written in 1881 by Johanna Spyri, Heidi has become the most well-known work of Swiss literature.

Indeed, the trekking tour we embarked upon is end-product of a fruitful project funded by Helvetas, the Swiss development organization, which has used Swiss tax-payer investment to help communities in Vietnam since 1994. Carried out by CRED – the Center for Rural Economy Development – based in Hanoi, the project, titled "Improving Livelihoods of Ethnic Communities through Community-based Tourism", had terminated in a joyful reunion of local home-owners, tour operators, and last but not least, local officials, whose jobs were to provide local people with tools and create mechanisms to improve people's lives.

In a simple ceremony at Hoang Su Phi district hall, CRED director Nguyen Lam Giang said, "I would personally like to thank Mr Lu Van Chung, the then vice-president of Hoang Su Phi's People's Committee, for reaching out to us five years ago. He and his entourage from Hoang Su Phi went to our office in Hanoi and requested a project for community-based tourism."

Many trips and exchanges were carried out until they worked out what was best for people of the district, who live among the most picturesque terraced rice fields, yet have to work hard and still live in poverty.

Over the course of five years, VND15 billion (US$650,000) has been spent on the project, including VND2 billion (US$86,000) loaned at low interest rates within the community.

The project has three major components of creating new tourism products and raising the capacities of local home-owners, connecting to the larger market and improving accompanying policy.

ALSO READ: Vietnam PM: Tourism sector to be key contributor to economy by 2020

Gradually, local communities have improved their awareness of community-based tourism. Small groups on CBT were set up for mutual assistance and a CBT fund was established, as well as peer visits and workshops.

The project has set up 28 homestays in two provinces, trained locals on safety for visitors, nutrition and home-cooking, and how to run a homestay. This introduces homeowners to the needs of visitors. 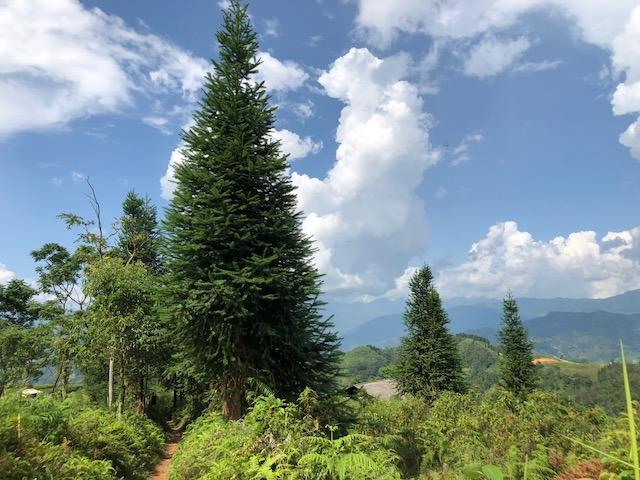 During the project, 500 homestay-related jobs were created and more than 1,000 people benefitted from charity activities generated by the project. Total turnover of VND6.5 billion from 2016-2018 was recorded, not including the sales from local products.

At the end of the project, an assessment by independent consultants rated its success as 4.5 out of 5. The most successful home-owner who came out of the project with the most impressive success story was Trieu Menh Kinh.

"I'm very happy to let you know that three years ago, I was the only one who opened my house as a homestay for tourists. Now we have four homestays in our hamlet and by the end of this year, two more will be added to the list," Kinh said about the homestay model that worked for him in Nam Hong Commune of Hoang Su Phi.

In Kinh's case, he was born with an entrepreneurial mindset and reached out of his community for new skills and expertise before he met with the project co-ordinators.

During the project, 500 homestay-related jobs were created and more than 1,000 people benefitted from charity activities generated by the project

"I used to have people staying at my home," Kinh said, standing in his brother's house, which also became a homestay overlooking the iconic rice paddies. "The porters used to look for places to stay for trekkers and they would stay a night at our home then leave."

Kinh said he spent six months in Sa Pa (Lao Cai province) learning how to cook before working in manual jobs to find a foothold in the hospitality business.

When the project was implemented in his hamlet, Kinh was sent to Mai Chau (Hoa Binh province) to learn from an established homestay there. He gained skills to run a homestay, opening his own home to tourists.

He was able to borrow VND80 million (US$3,400) from the project and has paid half back so far. The first year he built his stilt house, he hosted 40 visitors. The second year, the number went up to 100, and this year, he expects to host up to 200 visitors.

Kinh's successful model spread to Quyen – his younger brother – and two more households in the commune, who invested in facilities to host up to a dozen visitors overnight.

Kinh now owns two homestay facilities which can host 22 visitors at one time. To serve visitors who wish to have some privacy, Kinh even built separate bungalows with 24 beds, still with a great view of the fields, of course.

Aware of the potential for waste, home-owners have trash burners on the premise and the ability to collect water. "I have the water collected in a pond, which runs over to a piece of land, where I plant taro before it gets channelled to the spring," Kinh said. 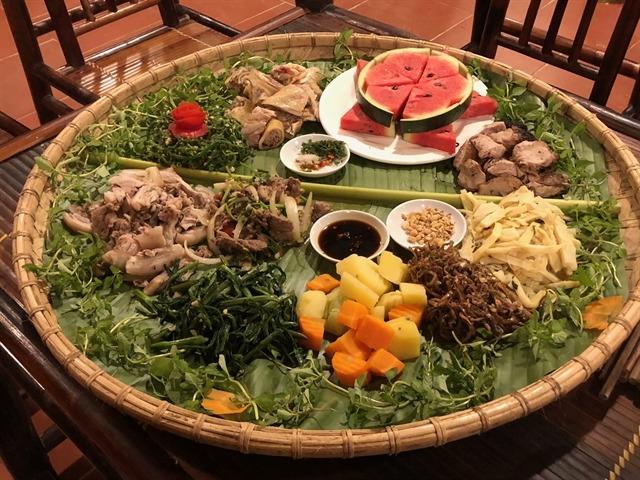 When you're in the mountains, do as the mountaineers do – rice wine or maize vodka for lunch and dinner. It is deemed disrespectful to turn down a drink when you’re a guest at someone’s house.

From the homeowners perspective, they used to drink at parties or at the market on Sunday. Now they have to make a toast to visitors every meal, having a bad effect on their health.

On this trip, I met Trieu Mui Mui, a Red Dao woman who three years ago told me that she had to step in to toast with visitors because her husband's stomach was so sick he couldn't take in any more alcohol. "Now he's fine," she said.

Making a toast was so deeply rooted in the culture, almost every member of the hosting board toured the room to offer a drink, shaking hands for another round, so the ritual goes.

The women of the table had to excuse ourselves for only sipping a few drops and we were forgiven, but not the men. A western man in our group, who had been declining offers to drink for three days (five meals altogether) saying he had to fast before a meditation trip, at the request of a local lady decided to ignore all he had said before.

"Cheers," he said, and the rest of us went wild cheering!

If he had been trying to attain nirvana, there's only one more step to reach enlightenment, then he dropped out.