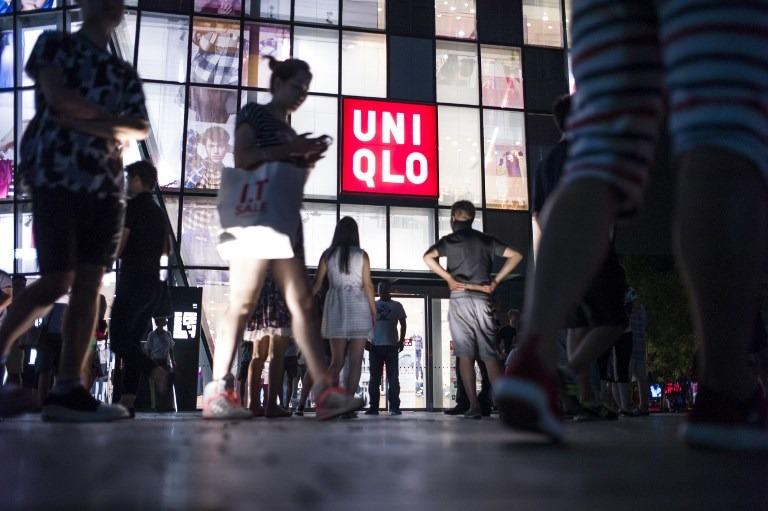 In this picture taken on July 15, 2015, people gather in front of a Uniqlo clothes store in Beijing. (FRED DUFOUR / AFP)

The Fast Retailing Co, which owns the chain, debuted the 4,100-square-meter store in the city’s Makati business district on Friday. It dwarfs the 2,700-square-meter site opened on Orchard Road in Singapore two years ago, and takes the Philippines’ total store count to 52, the most in Southeast Asia and fourth-most outside Japan.

It dwarfs the 2,700-square-meter site opened on Orchard Road in Singapore two years ago, and takes the Philippines’ total store count to 52, the most in Southeast Asia and fourth-most outside Japan

The seller of basic clothes that emphasize advanced materials is betting on the country’s young, English-speaking population and booming tourism market to drive sales. Economic growth slowed to 6 percent in the second quarter, as household consumption -- which accounts for more than a third of gross domestic product -- rose 5.6 percent.

“We have a lot of headroom to grow given the size of the Philippine economy and its growth potential,” Satoshi Hatase, Uniqlo’s Southeast Asia and Oceania chief executive officer, said in an interview Thursday. “This is far from being saturated."

The flagship store opens as Philippine consumer prices have been soaring at the fastest pace in Asia. Inflation accelerated to 6.7 percent in September, the fastest in nine years, driven by rising prices for food and oil.

With plans to enter Vietnam by 2019 and shift to bigger, freestanding stores in the region, Uniqlo is on track to hit its target of tripling sales in Southeast Asia to 300 billion yen (US$2.6 billion) by 2022 from 100 billion yen in 2017, Hatase said.

"Uniqlo’s value-priced basics such as t-shirts and skirts should appeal to budget-minded consumers dealing with rising inflation," Jastrzab said.