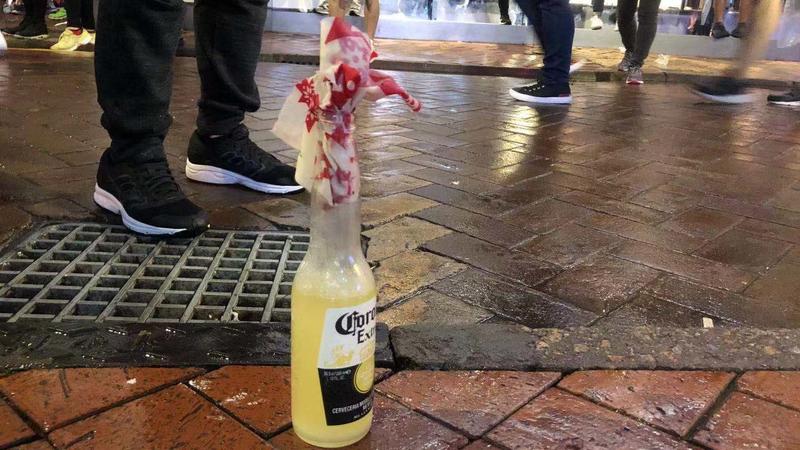 A radical protester has a Molotov cocktail ready during an illegal assembly in Wan Chai, Hong Kong on Aug 31, 2019. (PHOTO / CHINA DAILY)

HONG KONG - Violence and vandalism spread across various districts in Hong Kong on Friday and escalated to an "unprecedented and outrageous" level, the Hong Kong police said Saturday.

At a press briefing early on Saturday, Senior Superintendent of Police Public Relations Branch Yu Hoi-kwan said unlawful assemblies some violent acts started at noon Friday in the Central district and spread to 14 out of 18 districts across Hong Kong in a short period of time in the evening, with the radicals hurling gasoline bombs, committing arson, blocking roads, attacking policemen and residents, and vandalizing shops and metro stations.

The police displayed video clips from the media showing the rioters damaging banks and shops, setting fires on public facilities including a mass transit railway (MTR) train, and assaulting residents and a police officer.

When a plainclothes police officer fell onto the ground after being attacked by a group of rioters, gasoline bombs were thrown at him

In one of the clips, when a plainclothes police officer fell onto the ground after being attacked by a group of rioters, gasoline bombs were thrown at him. He was briefly on fire. The officer dropped his gun and magazine while trying to escape.

While waiting for backup, another gasoline bomb was thrown at the officer and his feet were on fire. The officer therefore was unable to pick up the dropped magazine when he retreated, according to the statement.

In the incident, the police officer faced serious threat to his life and fired one shot in self-defense, Yu said, adding that a radical protester even tried to snatch the officer's pistol during the attack.

She said that the police officer was completely outnumbered by a large group of radicals and was under serious life threat, and his decision to open fire was legal and reasonable.

Police appeal to members of the public to return any bullets or bullet casings if found, adding that it is an offence for any person to possess ammunition without a license. Offenders shall be liable on conviction to a fine of HK$100,000 and imprisonment for 14 years, the police said.

Acting like robbers, the radical protesters broke into shops and even damaged the reel gates of banks and set fires inside, Yu said, adding that they acts, with an unprecedented level of violence and seriously disrupting the community, were "outrageous and disgusting."

The senior police officer said it is distressing to see more people being injured in the violent incidents, and the police appeal to people from various sectors of the community to work together in opposing all forms of violence and restoring social order.