As smart technologies pervade our lives like never before, we turn the spotlight on some of HK’s most noteworthy achievers from across different creative fields who engage with artificial intelligence, or the idea of it. The five-part series explores what architects, artists, designers and writers make of the ways in which machines are impacting human society and how they plan to adjust and renegotiate their places in a changing world order where AIs outnumber humans by several folds. 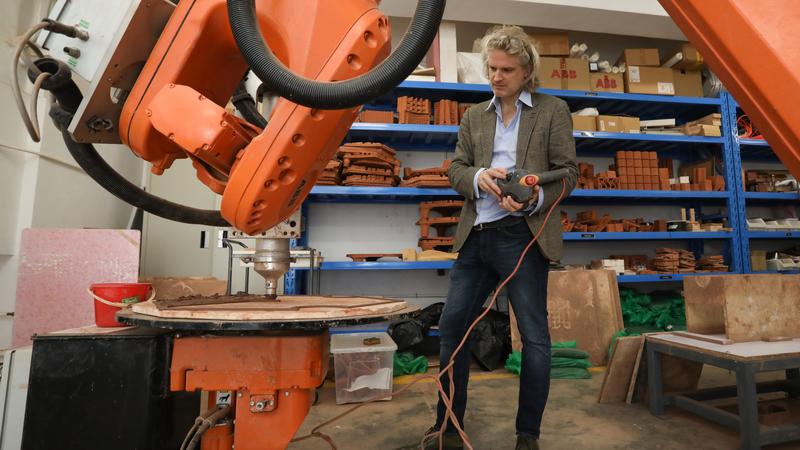 Although it may be a while before robots arrive on Hong Kong’s construction industry scene, when that happens, architects will probably have a more hands-on role in the building process than they do now, says Christian J. Lange. A professor in the faculty of the University of Hong Kong’s (HKU) Department of Architecture, Lange foresees a more deeply connected and meaningful architect-robot cooperation in an AI-powered building environment.

A few hundred years ago, he reminds us, architects were multitasking as builders-planners-designers. “In Germany, we call it Baumeister, or the building master, and they were the ones who built the cathedrals,” says Lange, a German-born architect who has been teaching at HKU since 2008. He paints a future scenario in which architects do not have to rely on contractors and craftsmen to execute their vision, rather work directly with robots.

“I hope that with the introduction of AI in architecture becoming a trend, architects will go down the route of being planners and fabricators as well,” says Lange. “They will be directly involved in the construction process, working with robots to build materials or parts of the building or even the entire house... get much more involved in the actual making and craftsmanship of a construction project. I see this as an opportunity for architects to understand their roles in newer ways.”

The founder of Hong Kong’s first, and probably still the only, robotic fabrication lab in 2016, Lange sees his own relationship with the machines — computer, software and robots — he makes use of on a daily basis as symbiotic. “When I design and develop an idea, I feed it into a system which produces something new I’m confronted with,” he says. “It’s like a dialogue between a system of machines and a human. I would probably not be able to create some of the structures I’m creating without AI, so it has changed me in terms of how I work as an architect, and as a teacher. I find this symbiosis in the design process rather exciting.”

Contrary to the popular notion that robots are useful for mass-producing identical, soulless objects, Lange’s experiments with AI are about pushing robots toward finding specific solutions to design challenges. Each robot-made sample artifact — terracotta bricks, honeycomb-shaped flower pots, hexagonal plates to hold coral reefs under water — lining the shelves of his lab in HKU is artisanal in character, marked by their “unique mistakes.”

While the logic behind industrial use of robots is that they can beat humans at speed and accuracy, Lange prefers to go the other way. He assigns creative tasks to robots, awaiting the results like an expectant parent and delighting in the surprises they come up with.

“All the design samples you see around you here in this lab would be quite difficult to make by hand,” he says.

“What I’m after is to work with robots creatively. I like the mistakes robots make. I see the potential in the unknown,” says Lange. Rather than using robots to expedite what humans can do, the ambition, he says, is to look for a set of robot-generated expressions and forms unachievable by human enterprise.

One of Robotic Fabrication Lab’s recent projects, Ceramic Constellation Pavilion — in which AI-generated terracotta bricks were laid on top of each other to create the look of a curtain, parted slightly by a gentle breeze — is a case in point. Each of the nearly 2,000 pieces used in the structure has a distinct form, thickness and color.

“To produce one such brick by hand will be very expensive. So we used a robot to make unique bricks using 3D printing,” says Lange. “I would say robotics and computation basically give us the ability to create as an architect much more specific solutions, moving away from the idea of standardization.”

When I tell him about meeting people from other creative fields who are also trying to rework old, traditional material with the application of AI — as indeed he is with terracotta bricks — Lange says this is a common enough practice in the architecture community. “Architects working with computation and especially robotics are really interested in ancient techniques or materials, and how to revitalize them with new technology,” he says. The architects at ETH Zurich — an institute that pioneered the use of robots to conduct architectural experiments in the first decade of this century — “are looking at ways of laying a brick, and the brick is one of the oldest materials we have in human society, it’s over 7,000 years old.”

“So the question architects keep asking themselves is: ‘How could I work with the computational power and the robots to create something new?’” he adds.

The advantage of using AI, he says, is that it can come up with a range of workable variations within the given parameters of a design at lightning speed.

“The robot doesn’t care if it is producing the same brick over and over or making constant changes,” Lange says. “The process isn’t perfect yet, but indicates the possibility of AIs working out specific solutions for architectural spaces in the near future. So I would argue that the promise this new technology makes is that rather than being soulless and homogenous, in the future it would actually be richer and help vary the environment.”

It took him three years to convince the university to start Robotic Fabrication Lab. Now three years since it was founded, the lab is a thriving research and development outfit, collaborating with other departments in HKU such as the School of Marine Biology of the Swire Institute of Marine Science to build a range of artificial coral reef structures. Fruits of the experiments conducted by the lab are put on show from time to time, sometimes with support from heavyweight private enterprises like real estate developers Sino Land.

Lange, who is an obvious product of multiple cultures — Germany, his native country, the United States, where he went to graduate school at Columbia University and later co-founded a research and design outfit in Boston, as well as east and south Asia where he has traveled extensively — says he chose Hong Kong to set up the Robotic Fabrication Lab as the city is “still a center in Asia on the crossroads between the East and West.”

“At that time quite a few universities had begun investing in AI technology, but there were not that many of them in Asia. We were the first in Hong Kong to invest in this technology,” says Lange. “Secondly, with so much building activity in Hong Kong, I think it makes perfect sense to set up a research center for robotics applications in this city.”

Soon a feature wall, put together by Lange and his team, will be erected on the HKU campus. The idea is to demystify how robotic technology works. “It gives us an opportunity to understand how the material will behave over time, monitor such behavior, and also to work toward achieving a very high-quality product,” Lange says.

Discussions on introducing robots in construction on an industrial scale are incomplete without the concern for job cuts, resulting from replacing the human work force with robots en masse.

Lange feels using robots in the building industry is the more economical option in a city like Hong Kong where labor is scarce and does not come cheap. The other advantage, he says, is that “it’s quite dangerous to be working on construction sites. So if you can start to replace human labor with machines (in some of the tasks), I think that’s actually beneficial.”

One of the reasons why we are yet to see robots on Hong Kong’s construction sites is because of the stringent regulations in force. “There are a lot of restrictions on how one could work with materials and processes, and no standards yet for 3D printing. In Hong Kong we have a very strict building code,” says Lange.

A relaxation of the rules will likely take place at some point, given that the Hong Kong government committed over HK$100 billion in the annual budget in February to support innovation and technology development — AI being one of four key thrust areas. The coming of a fourth industrial revolution fueled by new technologies is an inevitable and irreversible certainty, and before it is unleashed on us in full force, it probably makes sense to get familiarized with the coping mechanisms.

As Eric Yim, chairman of Hong Kong Design Council, says, the need of the hour is to inform and educate children in primary school that blue-collar jobs will not be available to humans any more by the time they are ready to enter the job market. “In fact, we should start giving them a clear picture of the changed circumstances from Primary One,” he suggests.

Lange agrees that the young people of today deserve to be forewarned about the paradigm shifts in supply chains that the AI-powered fourth industrial revolution is likely to cause. “The education sector needs to be strengthened, and the job market restructured in a certain way,” says Lange.

However, for all the blue-collar jobs that will be lost to the AI invasion it might also be possible to create new opportunities, he contends. “When you have algorithms taking over some of the repetitive jobs we have in the industry, you (might want to) educate people better, so that they can engage in the more creative aspects within many industries,” he says.