More than 1,000 flights in Japan have been canceled and local train services were set to be halted across Tokyo as the country braced for a powerful typhoon that is on path to near its coast over the weekend.

Typhoon Hagibis, which is expected to bring heavy rain and violent winds, has also forced factory and shops to close, with shoppers clearing out shelves at some stores as they scrambled for bottled water and instant noodles. Local authorities are also on alert for possible flooding as the storm may coincide with high tide at Tokyo bay.

The typhoon, currently located south of Tokyo, is packing winds of up to 252 kilometers per hour, and could make landfall in eastern Japan around Tokyo on Saturday.

The storm, which was downgraded to Category 4 system on the five-step Saffir-Simpson scale used in the US, has also forced organizers of the Rugby World Cup to cancel two games scheduled on Saturday. 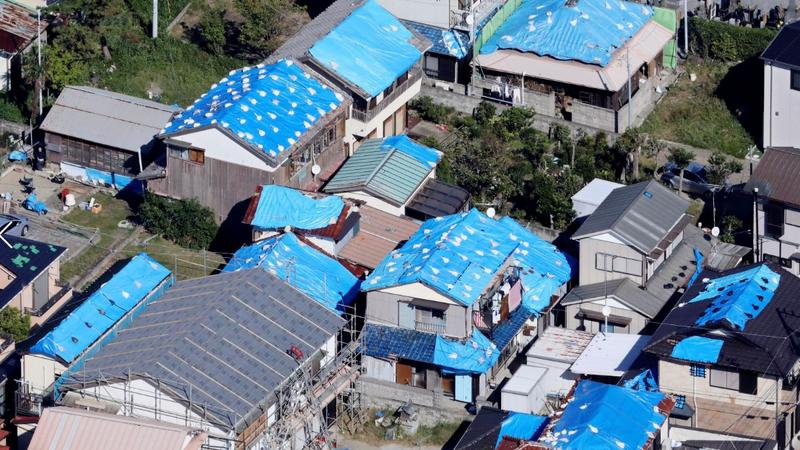 This Oct 9, 2019, photo shows the sheet-covered roofs of the houses damaged by typhoon Faxai in Kyonan, near Tokyo. (KYODO NEWS / AP)

Here's how the storm is impacting the country so far:

Japan Airlines Co cancels as of 7:30am 18 routes Friday, 513 domestic and 72 international flights on Saturday

ANA Holdings Inc. canceled all its roughly 490 domestic flights to and from Tokyo airports on Saturday, as well as 112 international flights

Sapporo Holdings Ltd plans to suspend four beverage plants on Saturday, according to its spokesman

Ito-Yokado, operated by Seven & i Holdings Co, will close over 120 stores on Saturday

Tokyo Disney Resort operator Oriental Land Co said its two theme parks will be closed Saturday through midday-Sunday, its first closure due to weather since 1984

Rugby World Cup games pitting England against France and New Zealand against Italy have been called off, meaning both matches will be considered scoreless draws

A final decision on Sunday's games, including a crucial match between hosts Japan and Scotland, will be made that morning