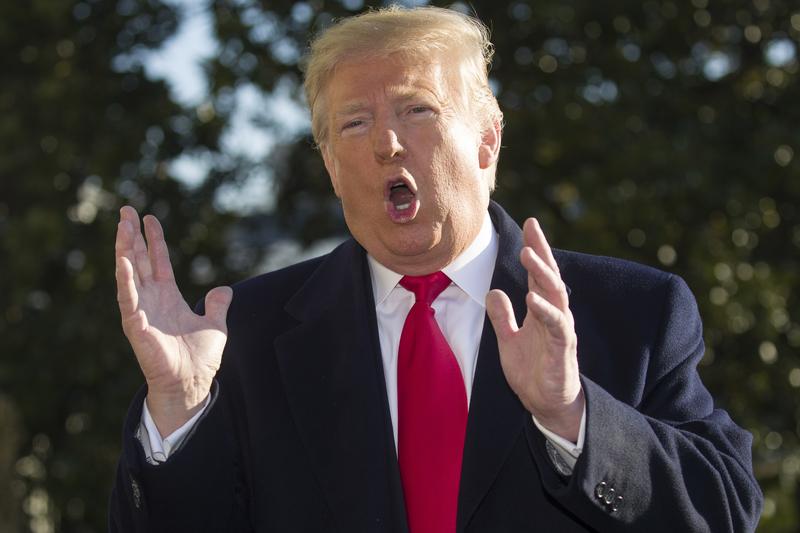 US President Donald Trump speaks on the South Lawn of the White House as he walks to Marine One, Jan 6, 2019, in Washington. (ALEX BRANDON / AP)

WASHINGTON — The partial shutdown of the American government is spotlighting the limitations of President Donald Trump's erratic negotiating style.

Trump's allies say he is simply keeping a longstanding campaign promise and they frame his focus on his base as a smart strategy, since he will need to energize those supporters for his re-election campaign

With the impasse over Trump's demand for border-wall funding dragging into a third week, the president's zigzag tactics and messaging have angered Democrats and frustrated even some of the Republicans struggling to help find him an off-ramp.

And while Trump's blend of bluster and bullying is hardly new — and at times can produce results — his self-professed dealmaking skills are now facing a bigger test against newly empowered Democrats.

So far, Trump is standing firmly with the loyal supporters who want him to fight for his promised wall along the US-Mexico border. But that stance carries considerable risk. The midterm elections revealed a deeply divided Republican Party and saw major Democratic gains in states that Trump will need to win re-election in 2020.

Always his own biggest booster, Trump declared himself "very proud of what I'm doing" after a meeting with congressional leaders on Friday that produced no breakthrough.

Trump's allies say he is simply keeping a longstanding campaign promise and they frame his focus on his base as a smart strategy, since he will need to energize those supporters for his re-election campaign. Some suggested that Trump's true believers aren't even interested in a negotiated compromise.

"I guarantee pollingwise, with his base, he is right in the sweet spot," said former campaign aide Barry Bennett. "If he cut a deal now it would hurt him." But Trump will need a broader swath of support than those base voters to prevail in 2020.

ALSO READ: US Congress to reconvene with no end in sight for federal shutdown

Getting dollars for a border wall was always going to be an uphill task for Trump. But after Democrats took control of the House in the midterm elections, the president's leverage ebbed. And his unreliable maneuvers have only aggravated the situation.

In recent weeks, Trump declared he would "own" the shutdown, then instead blamed Democrats. His border demands have gone back and forth between a concrete wall to "steel slats." He's insulted Democrats, confused Republicans and offered little empathy for the hundreds of thousands of federal workers without paychecks. And his Twitter feed and public pronouncements have produced a steady stream of inaccuracies about what he refers to as the "crisis on the border." Trump's fitful style is hardly a surprise. In a previous budget showdown, Senate Democratic Leader Chuck Schumer likened bargaining with Trump to negotiating with "Jell-O." Back in March, Trump threw lawmakers into a panic when he threatened an 11th-hour veto of an agreed-upon spending bill, only to be talked out of it by advisers.

Just a few weeks ago, lawmakers thought they had a solution to the standoff, with a short-term agreement to keep government open. The White House had signaled it would consider the plan. But then Trump changed course after coming under intense pressure from conservative allies. Since then he has repeatedly said he won't sign a spending deal that lacks money for the wall — though he's signaled some flexibility on just what constitutes a wall.

A further complication: Trump's long practice of contradicting his aides makes it difficult for anyone else to negotiate on his behalf.

In recent days, Trump has rejected his own administration's previous offer to accept US$2.5 billion for the wall. After a round of staff-level talks Saturday, Vice President Mike Pence tweeted that the session had been "productive," only to have Trump later tweet: "Not much headway made today." On Sunday, Trump said that he was not expecting much to come from further talks held by Pence, undercutting him before the session even began.

If there has been a constant, in fact, it is the mixed messaging.

In a rambling Rose Garden appearance on Friday, Trump described his meeting with congressional leaders as productive, after Democrats claimed otherwise. He said much of the wall had been built, though it hasn't. He said Mexico would pay for the wall through a new trade deal, though there are no such terms in the still-unratified deal. He wrongly claimed that he'd never called for the wall to be concrete. And he claimed, without evidence, that some ex-presidents had told him to push for the wall.

Trump, the author of "The Art of the Deal," promised during his campaign that he could bring unmatched dealmaking skills to the White House. But navigating complex legislation, trade issues and foreign policy matters is vastly different from executing real estate transactions.

So far, Trump's presidential dealmaking has had mixed results.

A massive tax cut muscled through in his first year was a major legislative win, though it was done with just Republican support. A meeting with North Korea's Kim Jong Un yielded only a vaguely worded commitment on denuclearization. And a trade clash with China that has rattled world markets has yet to be resolved.

Republican consultant Alex Conant said that in Trump's dealings so far, "he hasn't drawn many concessions from his adversaries, nor has he given many concessions." But Conant allowed that the landscape got a whole lot tougher for Trump when Democrats took back the House, and the shutdown is far from the last test the president will face. Warned Conant: "This will not be the last government funding package he'll have to negotiate."