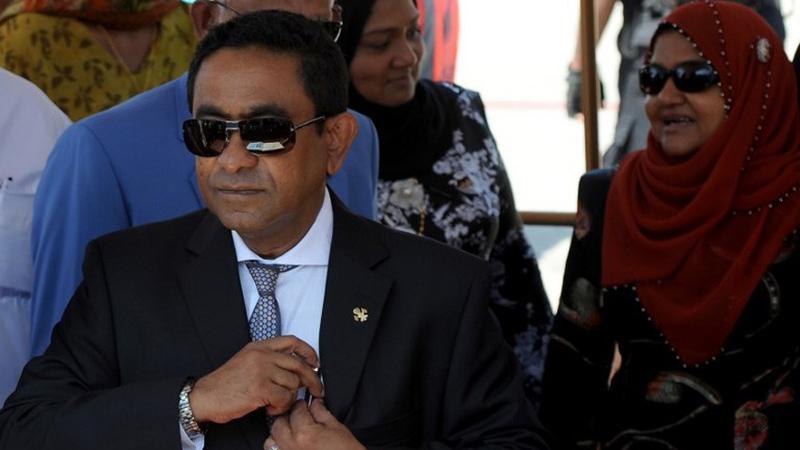 The criminal court in Male, the capital, ordered Yameen held in custody after prosecutors argued at a hearing that he could attempt to influence witnesses if he were free.

Yameen was charged with money laundering for alleged involvement in the embezzlement of Maldives Marketing and Public Relations Corp funds.

Police say investigators found US$1 million in Yameen's bank account allegedly linked to a deal to lease public islands for tourism development in the Maldives, an Indian Ocean archipelago famous for its luxury resorts.

President Ibrahim Mohamed Solih also suspended two Cabinet ministers — Ahmed Maloof and Akram Kamaludeen — over US$33,000 allegedly found in each of their accounts from the same resort development deal.

State lawyer Aishath Mohamed said documents showed that Yameen had attempted to influence witnesses and had offered them money to change their statements.

Referring to the statement, Chief Judge Ahmed Hailam ordered Yameen to be kept in detention until the end of the trail.

Yameen told the court that he didn't know the people who had testified against him and never gave anyone bribes. He also said he didn't know that 1 million dollars had been transferred in to his account, and that after he found out he contacted the Anti-Corruption Commission.

Yameen lost his bid for re-election last September after a five-year term during which he was accused of corruption and misrule. The elections, only the third since multiparty democracy was restored in 2008, was a surprise upset by Solih, who campaigned on a promise to investigate allegations of corruption by Yameen's government.

ALSO READ: Maldivians asked to report on possible graft of prior govt

Dozens of Yameen's political opponents — including his half-brother, Maumoon Abdul Gayoom — were jailed during Yameen's term in office following trials that were widely criticized for lacking due process.

Gayoom was released on bail a week after Yameen's defeat.

Another ex-president, Mohamed Nasheed, who spent a year in jail on a terrorism conviction under Yameen before winning political asylum in Britain, returned to the Maldives after Yameen's defeat. The Supreme Court annulled his conviction in November.