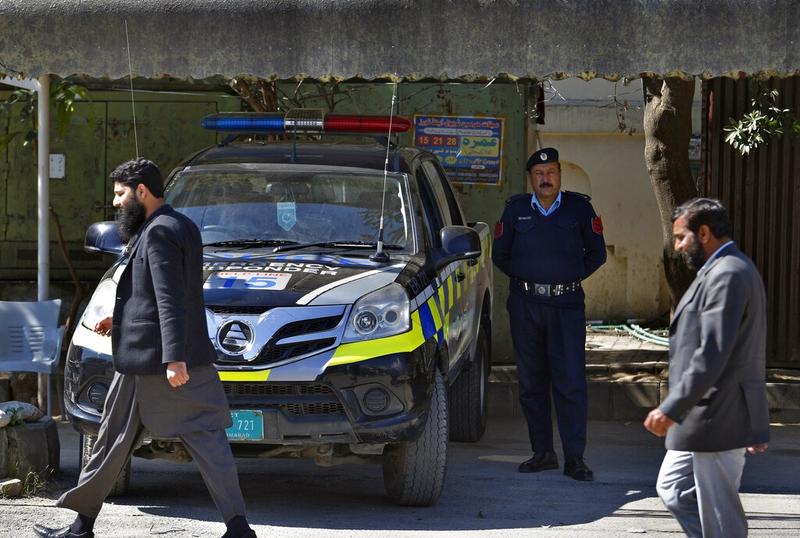 Worshipers walk past a police vehicle stationed outside a mosque belonging to a banned religious group in Islamabad, Pakistan, March 6, 2019. Pakistan on Wednesday continued a crackdown on seminaries, mosques and hospitals belonging to outlawed groups. (ANJUM NAVEED / AP)

SRINAGAR, India — Indian and Pakistani soldiers shelled military outposts and villages along their highly militarized frontier in disputed Kashmir on Wednesday, in an outbreak of new violence despite stepped-up diplomatic efforts by the rival countries to ease tensions.

The two armies accused each other of initiating the artillery and mortar fire and small-arms gunfire. No casualties were immediately reported.

In an effort to ease tension with India, Pakistan on Tuesday arrested dozens of people including the brother of the leader of the outlawed Jaish-e-Mohammad militant group, which claimed responsibility for the Feb 14 suicide bombing in Kashmir

Tensions have been high since Indian aircraft crossed into Pakistan last week, carrying out what India called a pre-emptive strike against militants blamed for a Feb 14 suicide bombing in Indian-controlled Kashmir that killed 40 Indian troops.

Pakistan retaliated, shooting down two Indian planes and capturing a pilot, who was later returned to India in a peace gesture.

The two countries have also resumed bus and train services that were stopped following the escalation of tensions, the most serious in the long-simmering conflict since 1999, when Pakistan's military sent a ground force into Indian-controlled Kashmir.

In another effort aimed at easing tension with India, Pakistan on Tuesday arrested dozens of people including the brother of the leader of the outlawed Jaish-e-Mohammad militant group, which claimed responsibility for the suicide bombing in Kashmir.

Among the detainees were Mufti Abdul Rauf and Hammad Azhar, two prominent members of the group who were on a list of suspects given by India to Pakistan over the weekend.

Pakistan on Wednesday continued a crackdown on seminaries, mosques and hospitals belonging to outlawed groups, saying the actions were part of its efforts to fight terrorism, extremism and militancy. In Islamabad, authorities also took control of a mosque and dispensary run by Jamaat-ud-Dawa, a charity run by an anti-India cleric, Hafiz Saeed, that is widely believed to serve as a front for Lashkar-e-Taiba, the militant group blamed for attacks in Mumbai in 2008 that killed 166 people.

In Pakistan, foreign minister Shah Mahmood Qureshi said its ambassador to India was returning to New Delhi and a Pakistani delegation will also travel to India on March 14 for talks on opening the first visa-free border crossing between the nations, a corridor that will allow Sikh pilgrims to easily visit their shrines on each side of the border.

"Tension has eased because of our successful diplomacy," said Qureshi, who led diplomatic efforts in recent weeks to muster the support of the international community to prevent a possible war with India. He said Washington, Beijing, Moscow and several Muslim countries played a significant role in easing tensions.

"We appreciate the role of the United States in de-escalating the situation," he told reporters in the capital, Islamabad. 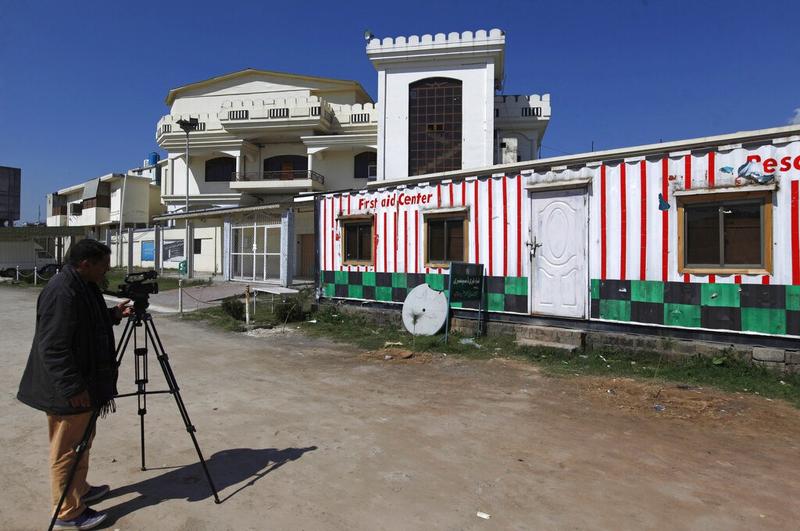 A Pakistani cameraman films a school and dispensary sealed by authorities beside a mosque belong to a banned religious group, in Islamabad, Pakistan, March 6, 2019. (ANJUM NAVEED / AP)

The new violence flared up at several places along the Line of Control that divides the Himalayan territory of Kashmir between India and Pakistan. Both of the nuclear-armed rivals claim the entire territory.

Both sides accused the other of violating a 2003-cease-fire accord and said their soldiers retaliated "befittingly and effectively."

Tens of thousands of people live in rugged, mountainous and lush green-forested areas along the frontier on both sides of divided Kashmir despite a climate of constant fear. Each year cycles of border violence break out between the two countries. Hundreds of civilians have died in the skirmishes, which have also killed livestock and damaged property.

The high tensions last week displaced hundreds of villagers on both sides. Many are still living in government-run shelters or with relatives and friends in safer places.

Sitting outside one shelter in Pakistan-controlled Kashmir, Mohammad Lateef, 42, said he had to leave his village near the Line of Control when Indian mortar shells began landing. "Our homes were destroyed in a 2005 earthquake and since then we have been living in tin-roof sheds," he said. "We are poor people. We don't have enough money to run our kitchen. How can we build bunkers to protect ourselves from Indian firing?"

Another resident, Rubina Bibi, 32, said she wants peace "so that we can live without leaving our own villages" in Kashmir. "Give us peace and we will want nothing else," she said.

In Indian-administered Kashmir, the situation was no different.

"We have seen these cycles of violence. They grab each other to kill and then they grab each other to hug," said Shafaat Ali, a resident of the Poonch frontier area. "Even if tensions between the two countries ease and they resume all relations as normal, our lives still remain under stress."

India accuses Pakistan of training, arming and sheltering rebels who began fighting Indian forces in 1989. Pakistan denies the allegation, saying it only offers moral support to Kashmiris seeking the right to self-determination for the entire territory.

Most Kashmiris support the rebels' goal of uniting Kashmir either under Pakistani rule or as an independent country, while also participating in civilian street protests against Indian control. About 70,000 people have died in the conflict since 1989.