By Xu Wei in Beijing and Kathy Zhang in Hong Kong 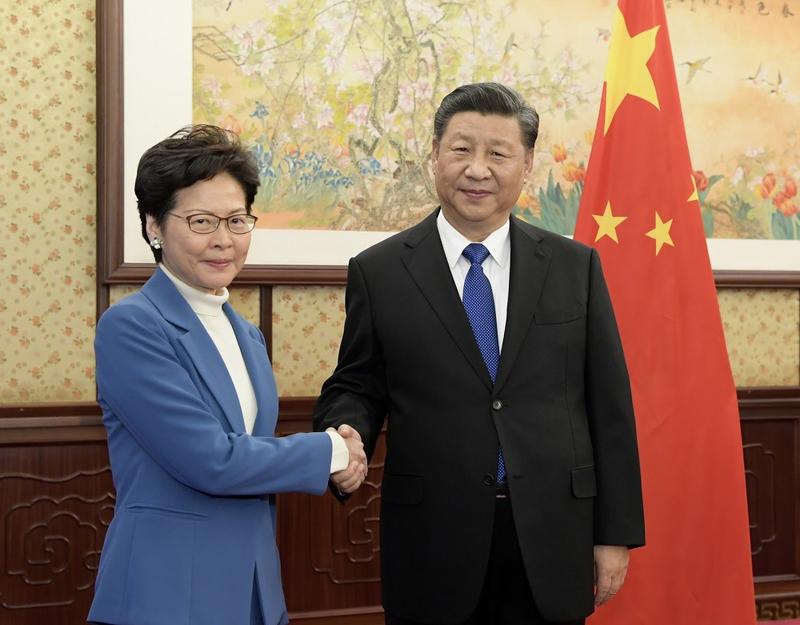 President Xi Jinping said on Monday the central government fully acknowledges the courage and sense of mission that Hong Kong's chief executive, Carrie Lam Cheng Yuet-ngor, has demonstrated during this special period for the region.

Xi's remark came as he heard a report from Lam on the region's situation and the work of the special administrative region government at the Zhongnanhai leadership compound in Beijing.

Xi vowed continuously staunch support for the government of the Hong Kong SAR, led by Lam, in carrying out governance in accordance with the law, and to the region's police in performing strict law enforcement

He told Lam, who is in Beijing to deliver her annual work report, that this year has been the most challenging and complicated for the Hong Kong Special Administrative Region since its return to the motherland. In the face of various difficulties and pressure, Lam has adhered to the bottom line of the principle of "one country, two systems", carried out law-based governance, assumed her responsibilities and conducted a large amount of difficult work, he said.

He also cited Lam's leadership of the SAR government in adopting a host of measures to aid businesses, ease difficulties faced by the public and carefully investigate deep-rooted problems in society.

Xi reiterated the pledge he made when addressing the BRICS Summit in Brasilia, Brazil, last month, saying that the Chinese government is determined to safeguard national sovereignty, security and development interests, implement the "one country, two systems" policy and oppose any foreign interference in Hong Kong affairs.

He also vowed continuously staunch support for the government of the Hong Kong SAR, led by Lam, in carrying out governance in accordance with the law, and to the region's police in performing strict law enforcement.

The country will firmly support patriotic forces, and it is his hope that the people from all sectors in the region can unite and make concerted efforts to bring the region's development back to a normal track, Xi said. 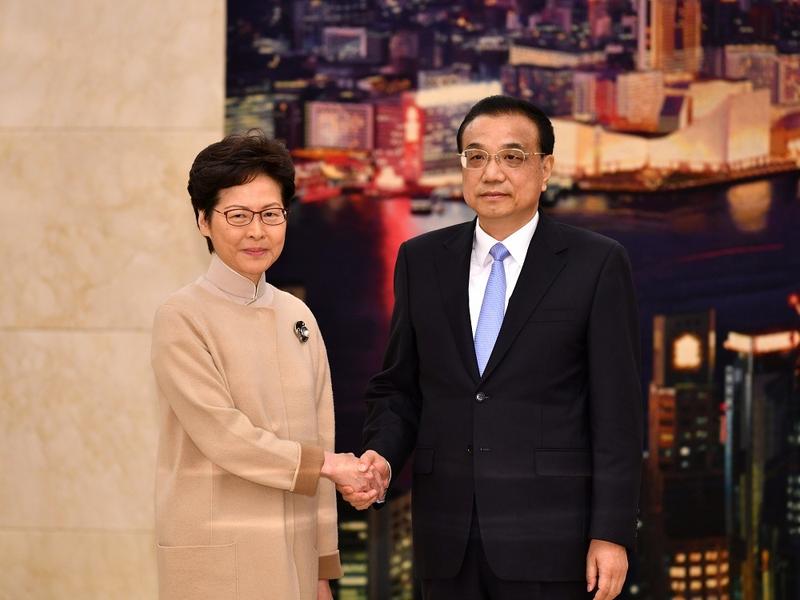 In his meeting with Lam, Premier Li Keqiang said that the Hong Kong economy is now showing obvious signs of recession, with many sectors being dealt a severe blow.

He told Lam that she had risen to challenges, but continuous efforts must be made to end the violence and chaos and restore order.

Li added that the SAR government must accelerate efforts to investigate the series of deep-rooted problems in the region's social and economic development.

Lasting violence in the region took a heavy toll on the economy in the third quarter, and the region is expecting its first annual contraction since the global financial crisis a decade ago, Lam said in the meeting with Li.

She said at a news briefing in Beijing on Monday that she was encouraged by the recognition from the central government, stressing that ending violence, which flares up from time to time, remains the city's top priority.

The SAR government will employ an independent review committee to look into the social unrest and find solutions as part of efforts to tackle the city's deep-rooted issues, she said, adding that continuous financial measures will be extended to local enterprises and residents at this difficult time.

Lau Siu-kai, vice-president of the Chinese Association of Hong Kong and Macao Studies, said Xi's affirmation of Lam and the HKSAR government boosts the confidence and morale of the Hong Kong community in ending violence and restoring order.

Xi's remarks have sent a warning to rioters on the streets to stop stirring up trouble and sounded a clarion call for the city's patriotic forces to stand united to safeguard the "one country, two systems" principle, Lau said.

Ronny Tong Ka-wah, a member of Hong Kong's Executive Council, said the central government can only provide directional guidance to the HKSAR government, and the SAR government should continue to explore feasible measures on its own to quell violence and bring the city back on track.