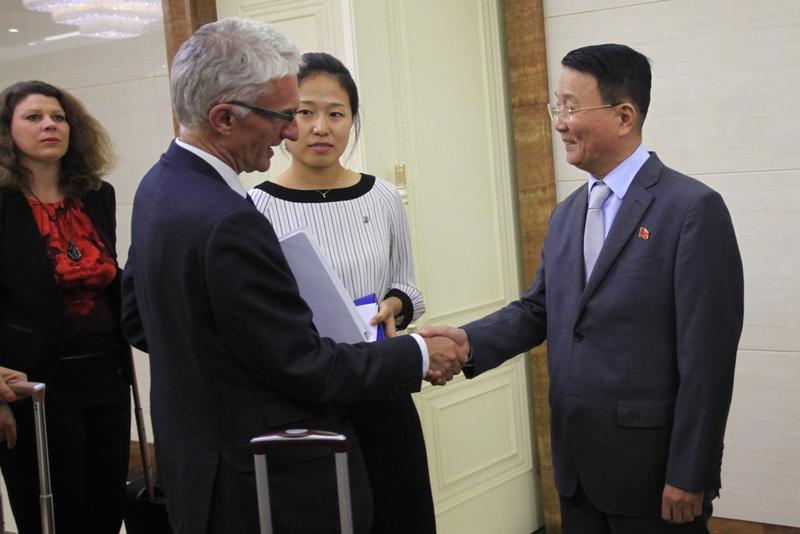 Mark Andrew Lowcock (front, left), Under Secretary-General for the UN Humanitarian Affairs, and his delegation arrive at Pyongyang Airport, in the Democratic People's Republic of Korea, on July 9, 2018. (JON CHOL-JIN / AP)

PYONGYANG - The Democratic People's Republic of Korea (DPRK) has made a lot of progress on the humanitarian front since 2012, although challenges remain for areas regarding child malnutrition, as well as the lack of safe water and medical supplies, a visiting United Nations official said Wednesday.

Mark Lowcock, UN undersecretary general for humanitarian affairs and emergency relief coordinator, told a press briefing that he held talks with DPRK officials and reviewed the impact of international humanitarian assistance as well as challenges facing the country.

He said the DPRK has made a lot of progress, illustrated by the fact that the number of children suffering from stunted growth has dropped from 28 percent to 20 percent since 2012.

Lowcock said the DPRK would receive a US$110 million assistance package through donations by UN member countries.

He pointed out that DPRK still faces a lot of challenges in child malnutrition, lack of safe water, and above all, medical supply shortages in hospitals and nurseries.

The UN official visited a hospital, a kindergarten and some farming areas in DPRK's South Hwanghae Province.

Lowcock's visit was the first to the DPRK by a UN undersecretary general for humanitarian affairs and emergency relief coordinator in seven years.