By DAVID HO in Hong Kong 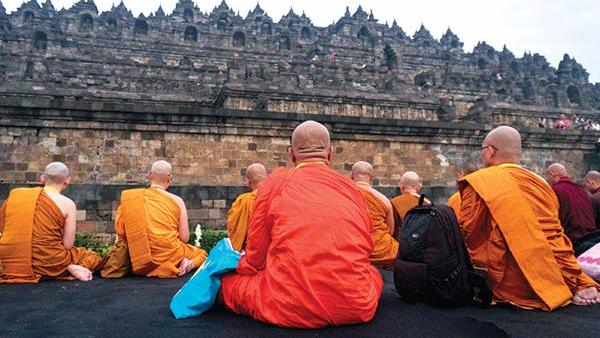 Buddhist monks pray at the Borobudur Temple in Central Java, Indonesia, on May 20, 2016. The damaging effects of tourism are showing on the world’s largest Buddhist temple and an iconic UNESCO World Heritage site. (AFP)

From historical port towns to ancient temples, Asia is home to some of the world’s most iconic cultural heritage sites. However, the risks to these sites posed by wear and tear from environmental factors, tourism damage and the potential for catastrophic natural disasters are often ignored.

Aware that protecting these sites is important work, the UNESCO World Heritage Committee is increasingly working with local or national governments to develop better protection plans. But with so many sites requiring extensive conservation efforts, the agency may have its work cut out for the foreseeable future.

One example of how some of the most important heritage sites around the region can suffer damage is Borobudur — the world’s largest Buddhist temple and an iconic UNESCO World Heritage site — in Central Java, Indonesia.

The ninth-century Mahayana Buddhist temple has been a popular place of worship, pilgrimage and tourism since it underwent a major renovation by UNESCO in 1973.

The monument is the most visited tourist attraction in Indonesia. It brought in some 3.8 million visitors in 2016 alone, according to figures from the Borobudur Temple Tourist Park management.

The World Heritage Committee identified damage by tourism as one of the main areas of concern under the present state of conservation. Despite the high volume of tourists it attracts, there are no systems currently in place to control or limit the number of visitors.

According to Marsis Sutopo, head of the Borobudur Conservation Office (BCO), the effects of tourism are starting to show in the site’s infrastructure, especially during peak season when tourists arrive in droves.

The high volume of tourists going up and down Borobudur’s narrow stairs daily has caused severe erosion on the 2,033 stone steps. Almost half of these stone surfaces are heavily worn. To prevent further damage, two main sections of the Borobudur stairs have been covered with wooden structures since November 2014. This was a joint effort by UNESCO, the BCO, Gadjah Mada University and the University of Indonesia.

The same technique has previously been applied at other heritage sites, such as Angkor Wat in Cambodia and the Egyptian pyramids. In March 2015, the BCO made a proposal to use rubber covers to protect the stone stairs. There have also been suggestions to issue special sandals for visitors at the site.

Authorities, both at the national and supranational level, are looking for ways to better protect the myriad cultural heritage sites peppered throughout Asia, but these plans often come up against the challenges of growth.

In Borobudur, the Indonesian government is reportedly considering plans to limit the number of people climbing it at any one time to 15, even as it works on developments that will bring in bigger numbers to the area. The government is planning to build a direct road linking the future Yogyakarta airport to the Borobudur area and is working on developing the surrounding districts as tourism hotspots.

Meanwhile, UNESCO is working with governments, researchers and non-governmental organizations on developing an integrated plan for disaster risk reduction at heritage sites.

Since it was listed as a UNESCO World Heritage site in 2008, George Town, on the island of Penang in Malaysia, has yet to develop an action plan to deal with natural or man-made disasters. However, in a sign of changes afoot, it will now be included with three other pilot sites — Malacca in Malaysia, Jakarta Old Town in Indonesia and Levuka historical port town in Fiji — in a project to develop risk management plans.

A two-day workshop in April organized by the UNESCO offices in Jakarta and Apia in cooperation with George Town World Heritage Incorporated and the International Centre for the Study of the Preservation and Restoration of Cultural Property kicked off this initiative.

“The objective of this project is to build capacity for disaster risk reduction of heritage cities in Southeast Asia and small island developing states in the Pacific with a view to develop strategies and integrate them into the overall heritage management plan of heritage cities,” Bernards A Zalo, head of the culture unit of the UNESCO Jakarta office, said at a press conference.

Lee Ho Yin, head of architectural conservation programs at the University of Hong Kong, said this is a good move. He suggested that besides disaster risk reduction, countries should also exchange ideas and plans on tourism and site management.

Blocking tourism is not the answer, Lee said, as it is essential for cultural conservation efforts. “If there’s no money, there’s no conservation. Both feed into each other.

“To prevent vandalism and damage by tourists, it’s essential that these heritage sites cater to cultural tourists rather than mass tourists.”

He added that UNESCO can work with non-governmental organizations on marketing and attracting tourists with an interest in cultural heritage.

“They can also work together on training locals for better site and tourist management. More public-private partnerships can also be grown from such collaborations. All of this will go a long way with conservation efforts in the long run.”

Heavy tourist traffic is only one of the risks these sites face. Natural disasters like volcanic eruptions, floods and earthquakes also threaten the preservation of many heritage sites in Asia.

The eruption of Mount Merapi in 2010 heavily affected Borobudur. Layers of volcanic ash up to 2.5 centimeters thick covered the grounds and destroyed vegetation in the area. There were worries that the acidic ash would severely damage the site.

UNESCO donated $3 million and worked with the BCO on rehabilitating the site. More than 55,000 stone blocks of the temple’s structure were dismantled to restore the clogged drainage system, which had been blocked by slurry.

In Thailand, the Ratchaburana Temple in the ancient capital of Ayutthaya was left severely damaged following a flood in 2011. The temple complex located inside the Ayutthaya Historical Park, a UNESCO cultural world heritage site, had many of its buildings damaged by the flood.

Germany’s Cultural Preservation Program financed the restoration project for the heritage site with a grant of 520,000 euros ($559,000) through the German embassy in Bangkok. After five years, the project was recently completed. The team managed to preserve Buddha statues, floral decorations, lime stucco and plaster remains. They also completed an inventory of stone Buddha fragments and wall paintings in the crypt.

Elsewhere in the region, similar partnerships in conservation have been formed between local bodies and UNESCO following natural disasters.

The 2015 earthquake in Nepal devastated the country’s cultural and natural heritage, including 691 historic buildings in 16 districts, of which 131 fully collapsed.

“The rehabilitation of Nepal’s museums and historical buildings following the 2015 earthquake has a deep, positive impact on the economic and social development of the country,” said Christian Manhart, director of UNESCO’s Kathmandu office.

“There is a tremendous sense of identity, determination and hope that comes with the reopening of museums and the restoration of temples.”

Lee from the University of Hong Kong believes that cultural conservation does more than just preserve the past. It is also about developing what is in the present for the future.

“Cultural conservation is important for strengthening a sense of place,” he said.

“UNESCO and their collaborators should work on fostering, educating and developing the communities in the areas of those heritage sites. These people will be the ones who play a very important role in the continuous conservation of these cultural heritage sites.”