AMSTERDAM — Bertrand Traore scored two goals and created another as a rampant Ajax beat Lyon 4-1 in the first leg of their Europa League semifinal on Wednesday.

Burkina Faso forward Traore, who is on loan to Ajax from Chelsea, had been in doubt before kickoff with a groin injury. But the 21-year-old showed no ill effects as the four-time European Cup winner made the most of its first European semifinal since 1997.

In between his strikes, Traore lined up 19-year-old Denmark striker Kasper Dolberg to score Ajax's second in the 34th minute and Amin Younes added the hosts' third in the 49th minute, but Mathieu Valbuena's away goal for Lyon in the 66th will give his team at least a faint hope of advancing from next week's second leg in France.

Playing in the Amsterdam Arena for the first time since an announcement that the stadium will be renamed in honor of Ajax's greatest player, Johan Cruyff, the Amsterdam team put in a performance that would have made him proud. It also showed that this young Ajax team could be strong enough to win its first continental title since 1995.

Poor finishing and good goalkeeping combined to keep the score respectable for Lyon in a match featuring relentless attacking by both teams. Even the small group of French fans applauded Ajax players as they performed a lap of honor after the final whistle.

Ajax coach Peter Bosz called it a "bizarre" match that could have ended 7-3 or 8-4.

Despite a tough first 20 minutes, he was pleased that Ajax's trademark attacking style had paid off.

"We want to win and we want to do that in an attractive way," he said. "Attack is the best form of defense."

Manchester United plays Celta Vigo in Spain on Thursday in the other semifinal, first leg.

After a scrappy opening in which Lyon gave Ajax little time or space on the ball, Traore put Ajax ahead in the 25th minute, leaping between a crowd of defenders to send a glancing header into the far corner from a free kick by Hakim Ziyech.

Ziyech was also the provider for Traore's second in the 71st minute. 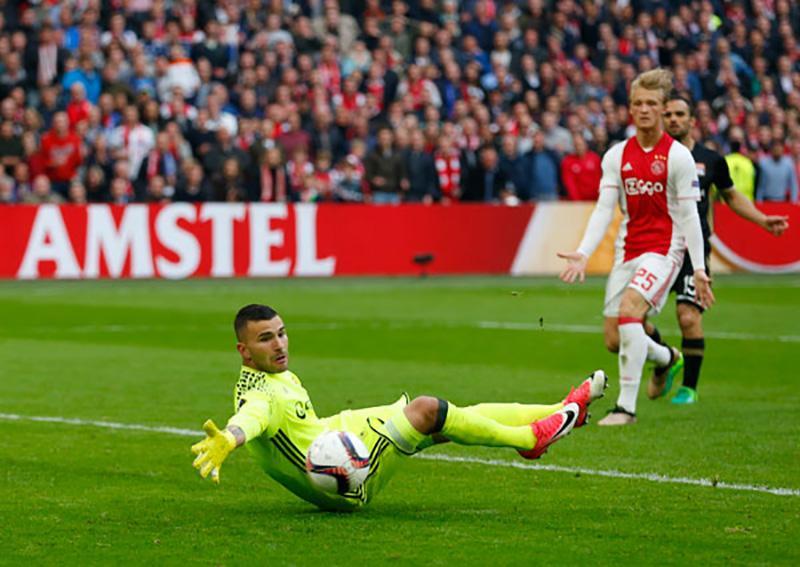 Ajax's Amin Younes scores the third goal of his team as Lyon's goalkeeper Anthony Lopes tries to stop the ball during the first leg semi final soccer match between Ajax and Olympique Lyon in the Amsterdam ArenA stadium, Netherlands, May 3, 2017. (AP Photo/Peter Dejong)

Traore created Ajax's second goal nine minutes after his first, powerfully heading a poor clearance by Lyon goalkeeper Anthony Lopes into the path of Dolberg, who calmly fired a low volley past the goalkeeper.

Ajax should have been further ahead at the break. Left winger Younes popped up on the right just before half time and broke through the Lyon defense, but Lopes made amends for his earlier mistake by saving well.

The closest Lyon came in the first half was in the 10th minute when Lucas Tousart cut back the ball for Maxwel Cornet. But his side-foot shot from close range was saved by Andre Onana, one of several good saves by the Ajax goalkeeper.

Lyon top scorer Alexandre Lacazette had recovered sufficiently from a right hamstring injury to start on the bench and coach Bruno Genesio risked bringing him on midway through the second half in an attempt to get his team back into the match.

Younes made up for his earlier squandered chance soon after the break, running onto a pass by Ziyech and hitting a shot that was deflected and only just crossed the line.

Lyon grabbed a lifeline when Onana's despairing dive was not enough to keep out Valbuena's powerful shot.

But Traore restored Ajax's three-goal cushion five minutes later when he ran onto a perfectly timed cross from Ziyech and jabbed the ball home from close range.

Lyon coach Bruno Genesio admitted after the match it would be hard to progress to the final.

"We have to believe that it is possible," he said. "But it will be difficult, that's a fact."