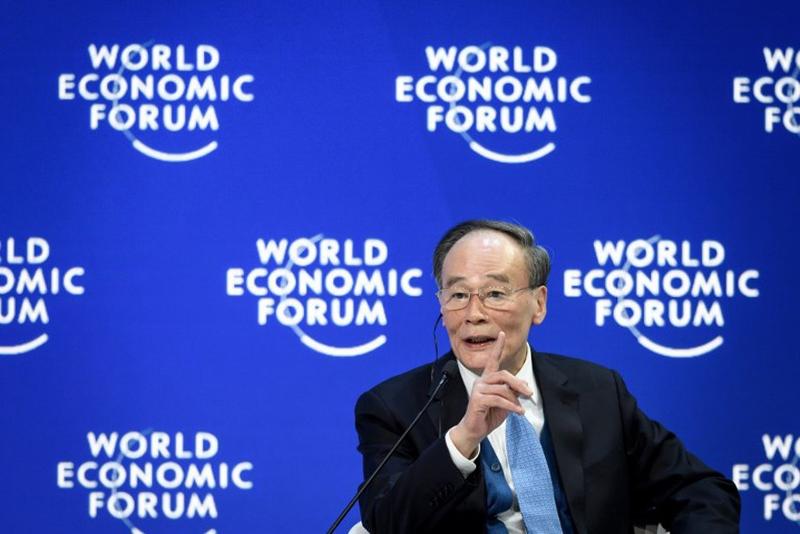 DAVOS – Chinese Vice-President Wang Qishan on Wednesday called for further development as a solution to imbalances in the process of economic globalization.

He made the call in a special address at the 2019 World Economic Forum (WEF) Annual Meeting.

The last thing we should do is to stop making the pie and just engage in a futile debate on how to divide it.

Wang urged countries to press ahead with structural reform, strike a right balance between equity and efficiency, adopt effective policy measures to prevent the worsening of income inequality and fend off the impact on some regions and industries caused by new technologies and market competition so that all people stand to gain from continued development.

"The last thing we should do is to stop making the pie and just engage in a futile debate on how to divide it," he said, adding that what is needed is making the pie bigger while looking for ways to share it in a more equitable way.

"Shifting blame for one's own problems onto others will not resolve the problems," he added.

World leaders and business elites gathered at the forum in Davos, Switzerland, scheduled for Tuesday to Friday, under the theme "Globalization 4.0: Shaping a Global Architecture in the Age of the Fourth Industrial Revolution."

History has shown that the Chinese nation is peace-loving and it rejects the practice of self-claimed supremacy, said Wang.

The Chinese culture values the teachings that one should help others to succeed while seeking one's own success, create a world for all, treat others with respect and pursue win-win cooperation, he said in his remarks addressing the WEF annual meeting.

He said the Chinese nation is a peace-loving, open and inclusive nation that keeps abreast of the times.

"We reject the practices of the strong bullying the weak and self-claimed supremacy," he said. While developing itself, China also wishes to work with all countries for common development and a community with a shared future for mankind, he added.

The advances in China in the past 70 years are not a godsend, nor a gift from others. Rather, they are made by the Chinese people through vision, hard work, courage, reform and innovation, said the Chinese vice-president.

The Chinese nation has made contribution to human progress, he said. What the Chinese people long for is to see China once again gain its rightful place among the nations of the world and achieve great rejuvenation, added Wang.

He said a historical perspective is key to understanding China. Questions about China's development and progress can be answered from historical, cultural and philosophical perspectives, he added.

"Given the close linkage between the past, the present and the future, one needs to learn about China's past in order to understand its present and forecast its future," he said.

"As they seek maximum profit in their operations, they allocate resources to countries and regions with low cost of production factors and sound business environment when building global industrial chains."

The economic globalization, which gained rapid ground in the last century, was started by Western developed countries, or the Mediterranean civilization, he said.

“Emerging economies have risen," he said. "As a result, economic globalization has reached a new stage as we now know."