Botswana lifts ban on elephant hunting, to some anger

JOHANNESBURG — Botswana has lifted its ban on elephant hunting in a country with the world's highest number of the animals, a decision that has brought anger from some wildlife protection groups and warnings of a blow to lucrative tourism.

Botswana has long been a refuge for elephants on a continent where tens of thousands have been killed over the years for their ivory, and the animals long have been a tourist draw

The southern African nation is home to an estimated 130,000 elephants. The lifting of the ban raised concerns about a possible increase in illegal poaching of elephants for their tusks to supply the ivory trade.

"Expect mass culling next," the CEO of WildlifeDirect, Paula Kahumbu, said in a post on Twitter, warning that the impact of Botswana's decision will be felt across Africa.

Botswana has long been a refuge for elephants on a continent where tens of thousands have been killed over the years for their ivory, and the animals long have been a tourist draw. Some had warned of tourism boycotts if the ban was lifted, and even American talk-show host Ellen DeGeneres joined the protest.

"President Masisi, for every person who wants to kill elephants, there are millions who want them protected. We're watching," she tweeted after Botswana's decision was announced.

Lifting the hunting ban comes amid growing conflicts between humans — particularly farmers — and elephants, the government's statement said. It said hunting will resume "in an orderly and ethical manner" but does not say how it will be regulated.

The country, with a population of just over 2 million people, suffers some human-wildlife conflict but has more space than many other countries for animals to roam.

"Co-existence between wild animals and communities is the only way that wildlife populations will survive," said Kitty Block, president and CEO of the Humane Society of the United States and Humane Society International. "What a shame that Botswana, previously hailed as a shining example of wildlife conservation and a safe haven for elephants, has opted to become a promoter of trophy hunting."

Political friction between Botswana's previous and current president has played a key part in the government's shifting stance on elephants in the past year. 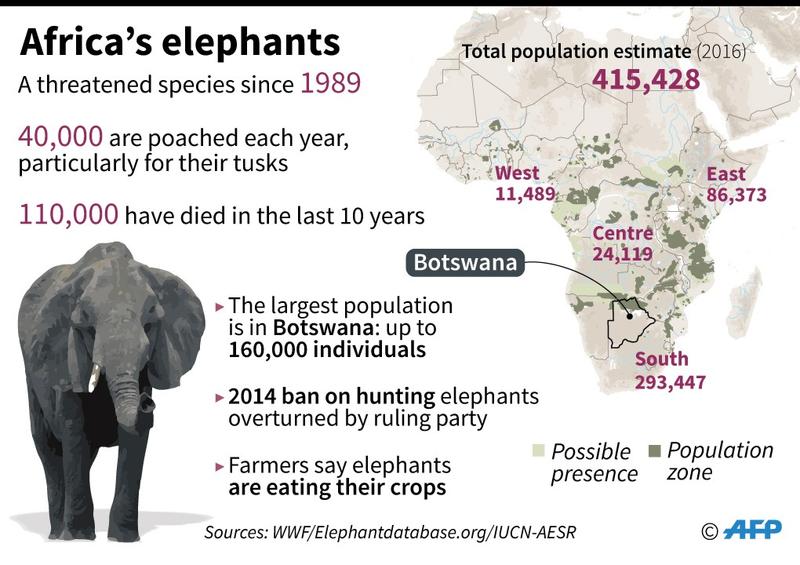 This AFP graphic shows a factfile on Africa's elephant populations and Botswana's decision to overturn its hunting ban lifted a hunting ban.

The hunting ban was put in place under previous president, Ian Khama, an outspoken conservationist, but current President Mokgweeti Masisi began to look into it not long after taking office last year.

The decision to lift the ban comes months ahead of general elections in October.

Khama "says Masisi is just currying favor with the electorate whom he will meet for the first time in October, in an election expected to be extremely close-fought, especially as Khama has backed his opposition," the Institute for Security Studies wrote earlier this month.

"It is heartening to see that the government of Botswana has taken all aspects into its careful consideration of this matter," said Paul Babaz, SCI's president. "These findings clearly show that hunting bans actually hurt wildlife conservation."

Though US President Donald Trump has decried big-game hunting as a "horror show," his administration has reversed Obama-era restrictions on the importation of elephant and lion trophies for personal use or display.

Botswana also is among several African countries with some of the world's largest elephant populations that have pushed for looser controls on legal ivory trade . They assert that the commerce will help them pay to conserve elephants, while critics assert that even limited trade fuels demand and drives up illegal killing.

Botswana and neighboring Namibia, Zimbabwe and South Africa are estimated to have about 256,000 elephants, or more than half of the total estimate for Africa.

Earlier this month Botswana's president raised some eyebrows when he gave stools made of elephants' feet to regional leaders while hosting a meeting on the animals' fate.