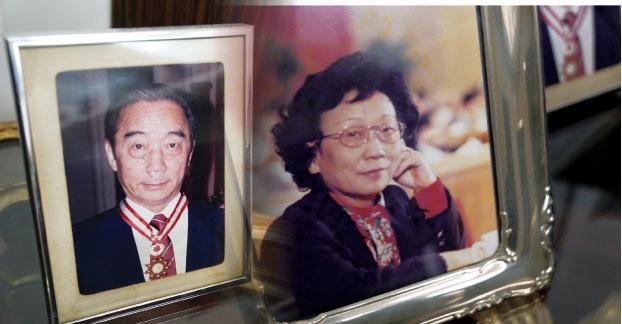 With hope for the future and a great deal of faith, about 550 invited guests ­— half from the Chinese mainland and half reporters and diplomats from Hong Kong, Macao and more than 50 countries and regions ­— gathered in Zhuhai city, Guangdong province, for the opening ceremony of one of the first Chinese factories built with overseas capital.

It was Nov 7, 1979. China’s reform and opening-up policy had been announced a year earlier, and no doubt there was some skepticism among the guests. For many, making their first visit to the mainland, Zhuhai ­— evolved from a fishing village in Guangdong ­—was an unwelcoming sight and a veritable wasteland.

The factory’s co-founder, however, businessman Chao Kuang-piu whose enterprises were mostly in Hong Kong and Macao, foresaw a great future for China in the opening-up policy. Chao later became a fully-fledged business magnate, founder of Novel Group, a world-leading textile and apparel enterprise based in Hong Kong, and one of the original founders of Dragonair ­— Hong Kong’s local airliner. 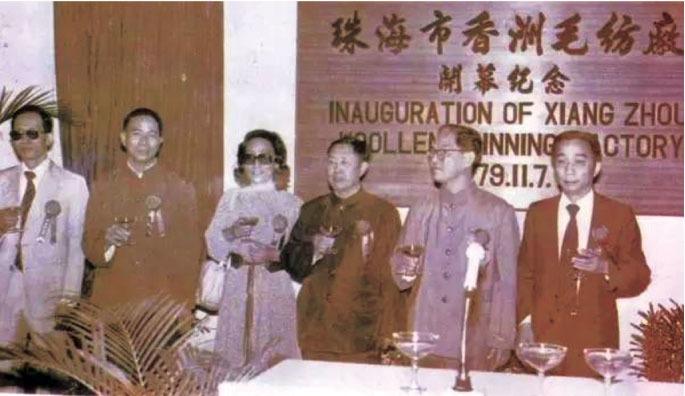 For his first venture into the mainland, however, he named his daughter, Susana Chou Kei-jan, as manager of the Xiang Zhou Woolen Spinning Factory.

Dives in, opens up

“My father is a pioneer whose business career has been full of groundbreaking accomplishments,” said Chou, who was in charge of her father’s Macao business. More pragmatic than her father, she became the person who realized Chao’s “historic” conception, which was deemed “unacceptable” by many people, including Chou herself.

She remembers her “shock” when her father told her he was opening a factory in Zhuhai. Then he went on and signed a contract with China National Textiles Import and Export Corp, a mainland textile giant. According to the contract, Chao promised to provide machines and materials, while the latter was required to offer land and recruit staff. 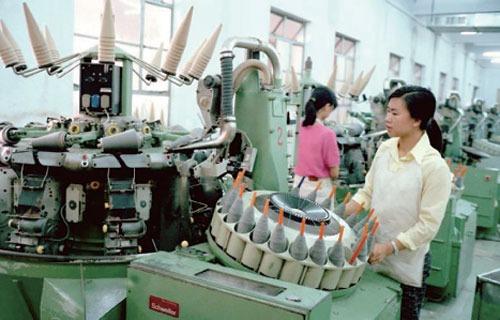 Workers inside the factory. (PROVIDED TO CHINA DAILY)

Father and daughter became members of the many unsung heroes in the 40-year history of the reform and opening-up policy, which has brought rapid development and drastic changes to the country. During the years since the opening of the Xiang Zhou factory, Macao, an initial contributor to the country’s development, invested $13.6 billion in mainland projects by the end of 2016. The investments went into more than 15,000 mainland projects, according to data from the nation’s Ministry of Commerce.

For the factory’s grand opening, Chou had gone to considerable lengths to ensure that food and beverages for her guests made it through the checkpoints between Macao and Zhuhai. “At that time, it was so hard to find a decent hotel or a good restaurant in Zhuhai to cater for our foreign guests,” Chou said. “For example, coke and ice cream were still rarities on the mainland at that time, thus, we had to bring it from Macao,” she added. The mainland still maintained strict boundary controls ­— so the arrival of the special treats for the diplomats and journalists was an achievement on its own.

“The Xiang Zhou factory set an example for following companies,” Chou told China Daily. The 76-year-old, who chaired the Legislative Assembly of the Macao Special Administrative Region for a decade (1999-2009), played a vital role in establishing an advanced factory in the once-impoverished Zhuhai. 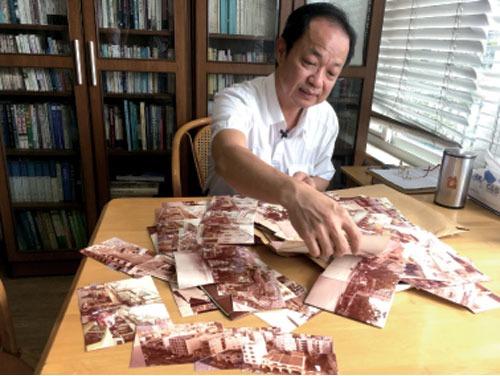 Samuel Ieng Weng-fat, a Macao history scholar and former member of the Committee of Cultural Industries of the Macao SAR, presents historical photos of Macao he had collected during past decades. (LI BINGCUN / CHINA DAILY)

It took Chou almost a year to get ready for the factory’s opening, which included overseeing construction and training staff. With help from Chou’s Macao employees, the factory, with an area of more than 6,000 square meters, was soon completed. The wool spinning machines, most of which were imported from the United States, Japan, Germany and the United Kingdom, were ready to spin. “The quality of our machines was equal to the current competition,” Chou said proudly.

It took all the hope and faith Chou could muster to keep the factory going; there were problems right from the start.

Training skillful workers was on the top of the list. The workers were mostly local farmers with no experience in operating machines, she said. They would squat and chat among themselves near the factory entrance when Chou wasn’t watching. And when she admonished them to get to work, they moved to the rear entrance, squatted and chatted some more.

Chou forwarded her complaints to her mainland partner, the Guangdong branch of China National Textiles Import and Export Corp. “They even refused to read our reports on product quality, as they believed that we money-oriented capitalists would not invest in an unprofitable factory,” Chou said.

“It’s understandable. Most of the mainland people didn’t trust overseas businessmen”, Chou explained. Fortunately, such widespread distrusts have been gradually dispelled along with the nation’s further opening-up, she added.

Chou then aired her complaints in an article she wrote for the People’s Daily, explaining the difficulties of opening a factory on the mainland, including employee’s lack of initiative and mainland people’s doubts over overseas entrepreneurs. That got results. 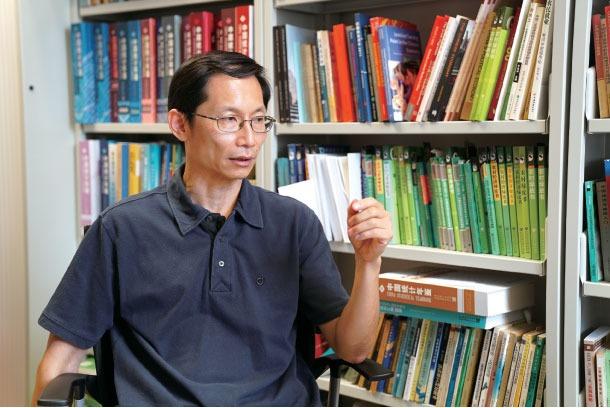 Kwan Fung, assistant professor of the Department of Economics at the University of Macau, says it's a must for Macao to diversify its economy if it wants to play a bigger role in the nation’s future development. (ASKA CHEONG / CHINA DAILY)

The Guangdong government then permitted the workers and leaders of the Xiang Zhou factory to go to Macao for training. The gesture was “unprecedented” at the time, Chou said.

After a month’s training in Macao, the employees were ready for the November opening. The grand opening, which marked the factory’s commencement, also signified the fulfillment of Chou’s mission in Zhuhai.

Her father’s investments paid off a few years after the factory commenced operations. In 1984, the factory created a sensation after former Chinese leader Deng Xiaoping, the chief architect of the reform and opening-up policy, made a special visit.

As one of the initial contributors, Chou concluded that she is “very lucky and honored to participate in the founding and management of the factory, which had a profound influence in the nation’s opening-up”.

Chou and her father, pioneers in Macao’s investment on the mainland, were followed by other business people, who began seeing opportunities in the reform and opening-up policy.

In 1980, Paradise Hill Hotel, a joint venture with investment from Macao business magnate Ng Fok, opened in Zhuhai. The hotel was followed by other Macao entrepreneurs, with investments spreading into Guangdong’s Foshan city and Zhongshan county, which later became a city too.

Besides hotels, Macao’s investments also centered on labor-intensive industries including infrastructure, food processing, toy manufacturing and leather processing. This all took place during the initial stages of opening-up.

Macao investors introduced resources, including capital, advanced technology and management skills, to the mainland. Owing to an economic blockade imposed by Western countries on China’s imports and exports from the 1950s to 1970s, these resources had long been in short supply. They became the launch pad for the Chinese economic miracle brought about by the nation’s opening-up policy.

Macao’s significance has been magnified since its return to the motherland in 1999. With the signing of the Mainland and Macao Closer Economic Partnership Arrangement in 2003, and its later supplementary agreements, the economic ties between the SAR and the mainland have been further consolidated.

Still, the SAR is working hard to diversify its economy. It is a must if Macao hopes to play an even larger role in the nation’s future development, contends Kwan Fung, assistant professor of the Department of Economics at the University of Macau.

Macao, a micro-economy, with 653,100 people living in an area of 30.8 square kilometers by the end of 2017, relied heavily on an integrated tourism industry, whose tax revenue made up nearly 80 percent of the SAR government’s revenues last year.

Kwan holds that it would be shortsighted to rely on gambling profits as an economic mainstay. He suggested more resources be applied to mounting exhibitions, catering and hotels to achieve sustainable growth.

Echoing Kwan’s view, Samuel Ieng Weng-fat, a Macao history scholar, reckoned that developing culture and creative industries in this melting pot of Chinese and Western cultures may stand out as the best means for achieving a sustainable and diversified economy.

Ieng, a former member of the Committee of Cultural Industries of the Macao SAR, encouraged local enterprises to invest in culture and creative businesses. He also called for closer collaboration with counterparts in the 11-city Guangdong-Hong Kong-Macao Greater Bay Area, extolling its rich and blended culture.

Still, other changes are needed to give full play to Macao’s role in the Bay Area and to achieve a wider and deeper regional collaboration. Legal barriers involving three different legal systems currently in place must come down, said Chou, who now serves as vice-chairperson of the Macao SAR Basic Law Committee.

She cited the Zhuhai campus of the University of Macau as an example. An area of 1.09 square kilometers on Zhuhai’s Hengqin island has been leased by the SAR government to ease the overcrowding of the university’s main campus. To facilitate the administration of the campus, the mainland area permitted application of SAR laws.

“Implementing a unified law in the area is the top priority for officials as enterprises should conduct businesses in accordance with the law,” said Chou.

Several years ago when Chou revisited Zhuhai, there was no trace of the Xiang Zhou factory. It had been demolished, replaced by high rises. Zhuhai used to be considered a “barren land” by Chou. Now, it has evolved into a metropolitan center attracting many Macao people to work and live. Referring to Zhuhai’s earth-changing evolution benefiting from continuously introducing overseas investments, Chou believes Macao entrepreneurs could also broaden their minds by setting sights on larger markets outside the city.