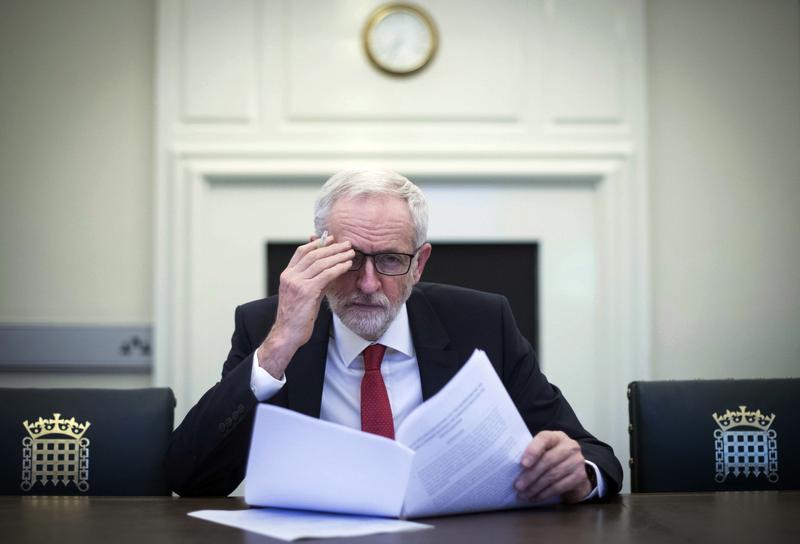 In this April 2, 2019 photo, Britain's Labour leader Jeremy Corbyn poses for the media with the Political Declaration setting out the framework for the future UK-EU relationship, in his office in his parliamentary office in London. (STEFAN ROUSSEAU / POOL PHOTO / AP)

An Electoral Calculus poll of 8,561 people surveyed after PM May's intended exit date found that following an immediate general election, Labour would become the largest party in the House of Commons

Prime Minister Theresa May's governing Conservatives would lose 59 seats in the House of Commons, paving the way for left-wing politician Corbyn to become prime minister, showed the poll published by the Sunday Telegraph.

Labour would increase its number of MPs by 34, making them the largest party in the British parliament.

Conservative supporters blamed their falling support on May's failure to deliver on her promise to take Britain out of the European Union (EU)by March 29.

Election and polling expert Prof John Curtice from Strathcylde University, who is also -president of the British Polling -Council, said supporters who backed leaving the EU had been drawn back to either the euro-sceptic UK Independence Party (UKIP) or the newly launched Brexit party, created by UKIP co-founder Nigel Farage.

An Electoral Calculus poll of 8,561 people surveyed after May's intended exit date found that following an immediate general election, Labour would become the largest party in the Commons.

It would win 296 seats of the 650 parliamentary seats, against 259 for the Conservatives.

Corbyn could then lead a government propped up by the Scottish Nationalist Party (SNP) which is also expected to make gains in a general election.

Martin Baxter from Electoral Calculus told the Sunday Telegraph: "Theresa May is discovering why David Cameron really held the referendum. It wasn't to placate his own Eurosceptic MPs, instead it was to stop Conservative voters defecting to pro-Brexit parties. That process seems to have restarted and the Conservatives are beginning to suffer."

The Observer newspaper in London reported Sunday that the latest Opinium poll suggested the Conservatives have dropped six points over the past fortnight, giving Labour a seven-point lead. The support is the lowest May's party has scored since the European elections in May 2014, according to the pollster.

May told MPs last month that she would stand down once she had secured the UK's exit from the EU.

The Telegraph commented that May now faces mounting calls by MPs and senior grassroots figures to name a date for her departure as it appeared Britain would have to participate next month in elections to the European Parliament. 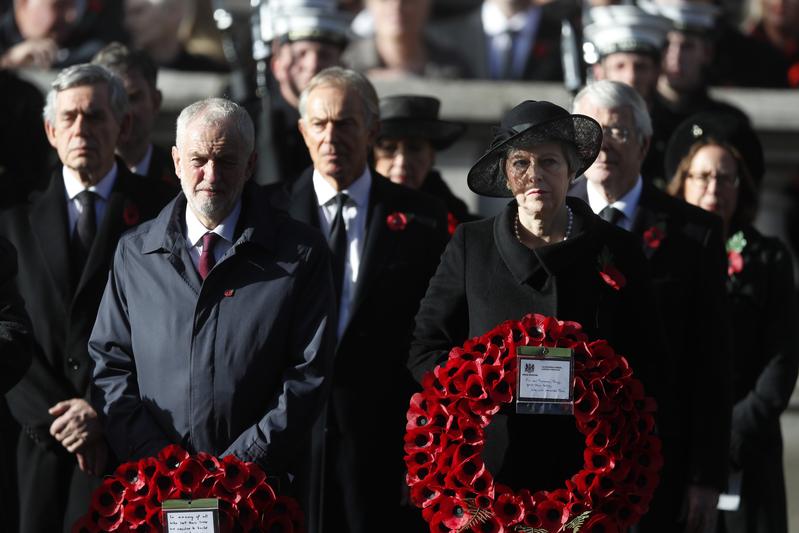 He told Sky News the timetable for her departure should still stand despite her failure to pass a withdrawal agreement.

"What the Prime Minister has to do is aim everything now towards departure before the European elections which would then allow her to step away having done what she said she would do, getting the UK out of the European Union one way or the other and then we can have another leadership election and pick a new leader," he told Sky.

In a television interview on Sunday, May's de facto deputy prime minister, the Cabinet Minister David Lidington said he did not think talks between the government and the Labour party, looking for a consensus Brexit deal, could be allowed to drag out for much longer.

He said he had not set a deadline for the talks to produce a result, but the public wanted parliament to resolve their differences over Brexit quickly.

The Conservative government and Labour are continuing talks over the coming week to test each other's ideas in a bid to break the Brexit deadlock.

Lidington said while there was no deadline, both sides would take stock in 10 days.

The two parties have set up a series of working groups in key areas, such as environmental standards, security and workers' rights, to try and find common ground.

Labour is pushing for a deal that keeps Britain allied to the EU's customs union and single market, but the current deal agreed by May would see Britain leaving both.

Last week the European Council extended Britain's membership of the bloc until Oct 31 to give more time for the British parliament to agree on a withdrawal deal.