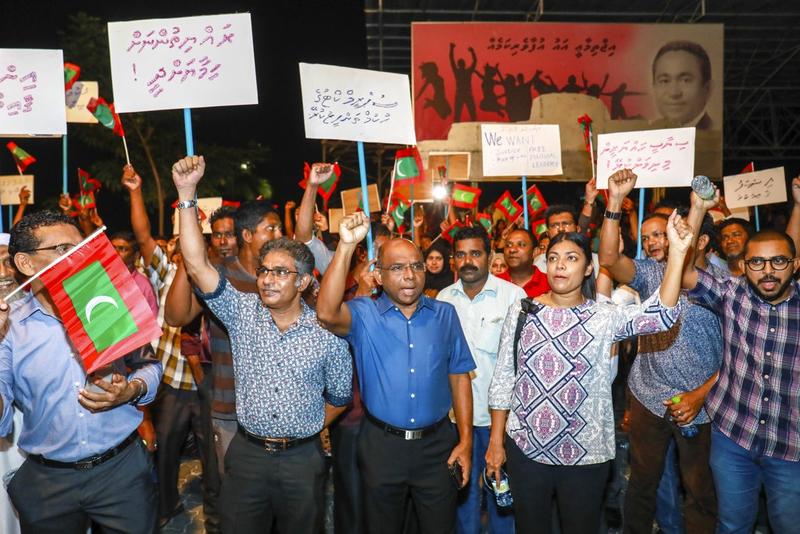 In this late Feb 4, 2018 photo, Maldivian opposition supporters shout slogans during a protest as they the urge the government to obey a Supreme Court order to release and retry political prisoners, including an ex-president in Male, Maldives. (MOHAMED SHARUHAAN / AP)

MALE, Maldives — The political crisis in the Maldives deepened Monday, as the government of the island nation said it would not obey a Supreme Court order to free a group of imprisoned leaders of the opposition.

The surprise judicial ruling last week has led to an increasingly tense standoff between the Supreme Court and the government of President Yameen Abdul Gayoom, with protests spilling into the streets of the capital, Male, and soldiers in riot gear deployed to the parliament building to stop lawmakers from meeting.

On Monday, Legal Affairs Minister Azima Shakoor said that "the government does not believe that the Supreme Court ruling to release the political prisoners can be enforced."

She explained the decision by saying that the Supreme Court had not acted on a series of government letters saying there were "numerous challenges" to implementing it.

On Sunday, a Supreme Court statement said that "there are no obstacles in implementing the ruling and releasing political prisoners and that this has been informed to the Prosecutor General's office."

There was no immediate comment from Yameen's main rival, exiled former President Mohammed Nasheed, who is among the prisoners ordered freed.

The Supreme Court ruled that the political leaders' guilty verdicts had been politically influenced. The ruling has led to protests by opposition supporters urging the government to obey the order. Clashes erupted between police and the political opponents on Thursday and Friday. Soldiers surrounded the parliament building over the weekend to stop lawmakers from entering the building.

The United Nations and several foreign governments, including the United States, have urged the Maldives to respect the court order.

Nasheed has been living in exile in Britain since 2016 after being given asylum when he traveled there on medical leave from prison. 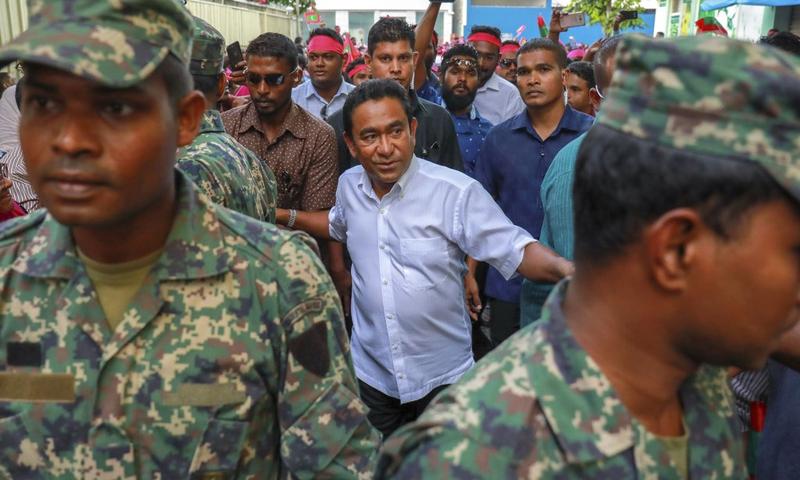 Maldivian president Yameen Abdul Gayoom, center, surrounded by his body guards arrives to address his supporters in Male, Maldives, Feb 3, 2018. President Yameen said on Saturday that he was willing to hold an early presidential election to allow voters to decide who they want to lead the country. (MOHAMED SHARUHAAN / AP)

In addition to ordering the release of the political prisoners, the court also reinstated 12 lawmakers who had been ousted for switching allegiance to the opposition. When those lawmakers return, Yameen's Progressive Party of the Maldives will lose its majority in the 85-member parliament, which could result in the legislative body functioning as a rival power to the president.

Known for its luxury tourist resorts, the Maldives became a multiparty democracy 10 years ago after decades of autocratic rule by the current president's half brother, Maumoon Abdul Gayoom.

But the nation lost much of its democratic gains after Yameen, who has maintained a tight grip on power, was elected in 2013. He had been set to run for re-election this year virtually unopposed, with all of his opponents either jailed or exiled.

On Friday, Nasheed said he would mount a fresh challenge for the presidency this year.

Nasheed was sentenced to 13 years in prison after he was convicted under the Maldives' anti-terror laws. The trial that was widely condemned by international rights groups.