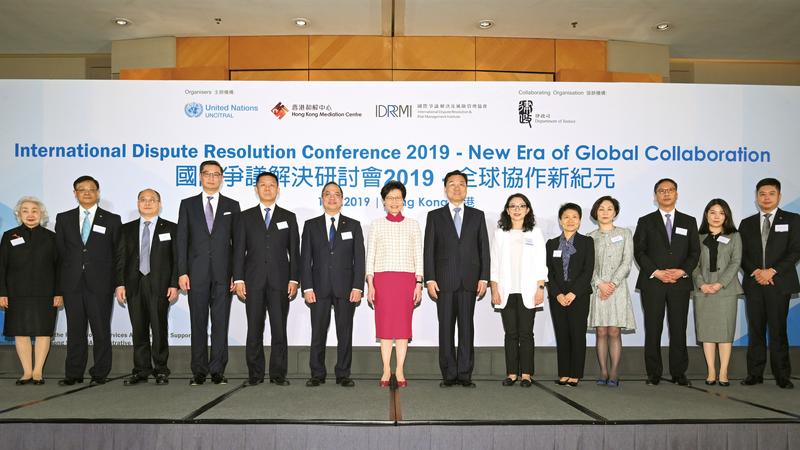 The HKSAR government “is committed to Hong Kong’s continuing rise as a center for international legal and dispute-resolution services,” she said on Wednesday.

Lam was addressing the International Dispute Resolution Conference, which drew some 500 professionals from various sectors worldwide to Hong Kong to discuss and exchange ideas on the settlement of disputes.

She cited the almost US$20-million fund the SAR government has allocated to support the development and initial operation of an electronic Business Related Arbitration and Mediation system (eBRAM).

The system is a secure and cost-effective deal-making and dispute-resolution online service for cross-border commercial and trade disputes, including those relating to projects under the Belt and Road Initiative, she said, and is expected to be in operation by the end of this year.

The SAR’s ranking in terms of the rule of law had climbed from 70 percent in 1996 to 94 percent in 2017, according to the World Bank’s World Governance Indicators, reflecting the city’s continued improvement in the rule of law.

Ye Jun — deputy director-general of the Department of Treaty and Law at the Ministry of Commerce — told the conference the central government will fully back Hong Kong in becoming a global center for dispute resolution.

With regard to the Belt and Road Initiative and the Guangdong-Hong Kong-Macao Greater Bay Area, he urged Hong Kong to integrate itself with the nation’s overall development and develop diversified approaches to the resolution of disputes.

Xie Feng — commissioner of the Ministry of Foreign Affairs of the People’s Republic of China in the HKSAR — said the BRI will provide a new platform for promoting international legal cooperation, optimizing dispute resolution mechanisms and improving global governance.

Hong Kong, he noted, is well known for its international networks and advanced professional services, which contribute to the city’s efforts to become a global dispute-resolution center.

Among the 297 non-domain named arbitration cases handled by the Hong Kong International Arbitration Centre in 2017, there were 217 international and 80 domestic cases. The most frequent users of HKIAC services are from the Chinese mainland, Singapore, the British Virgin Islands, Cayman Islands, the United States, South Korea, Thailand, Macao and the United Kingdom.