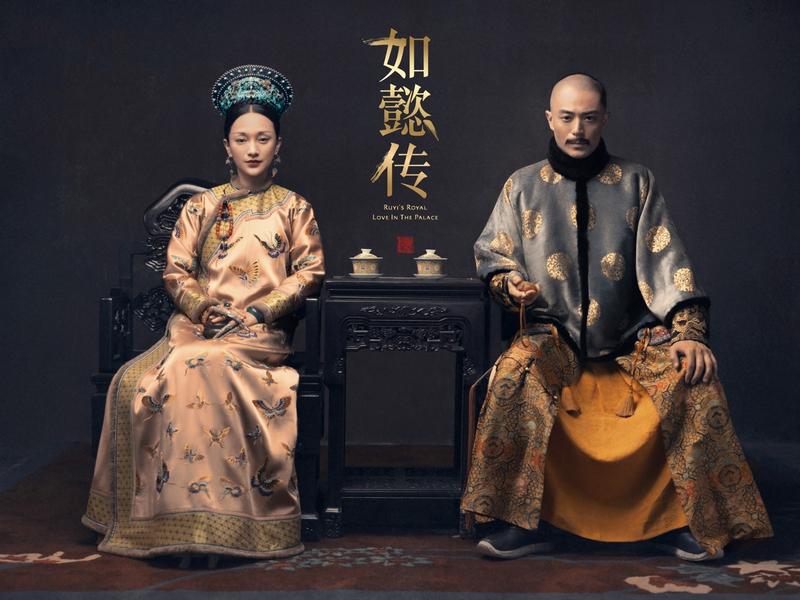 As the last imperial dynasty in China, the Qing Dynasty (1644-1911) court left numerous scrolls and books detailing the lives of our former rulers, which have inspired a number of movies and television dramas.

The drama headlined by Chinese actress Zhou Xun and Taiwan actor Wallace Huo has also aired simultaneously in 18 countries and regions, including the US, Canada, Australia, New Zealand, Malaysia and Brunei

As the latest production to depict the palace life of Emperor Qianlong, the longest-reigning monarch in the country's feudal history, the popular series Ruyi Zhuan, or as it's known in English, Ruyi's Royal Love in the Palace, had accumulated nearly 4 billion clicks as of Wednesday thanks to its exquisite props, lavish sets and stellar cast.

Set in the 18th century, the tale debuted on the Tencent Video streaming site on Aug 20 and has broadcast nearly half of its 87 episodes.

Although the drama received mixed reviews in its first few days, it has won over audiences, which can be seen as its score has steadily risen from 6.5 to 7.3 points on Douban, a popular Chinese TV and movie review site.

Aside from the domestic splash, the drama headlined by Chinese actress Zhou Xun and Taiwan actor Wallace Huo has also aired simultaneously in 18 countries and regions, including the United States, Canada, Australia, New Zealand, Malaysia and Brunei.

Some foreign viewers say the drama has raised their interest in Chinese history and culture.

"This series has made me really curious about Empress Ulanara's real story, even if sometimes the show is hard to follow because many things happen at the same time, it's very enjoyable," comments one viewer on Viki, a San Francisco-based streaming site, which rates the series 9 points out of 10.

As a follow-up to Zhenhuan Zhuan, or Empresses in the Palace, one of China's highest-rated TV dramas which debuted in late 2011, Ruyi's Royal Love in the Palace is penned by the same writer, Wu Xuelan, who is perhaps better known by her pseudonym, Liu Lianzi. 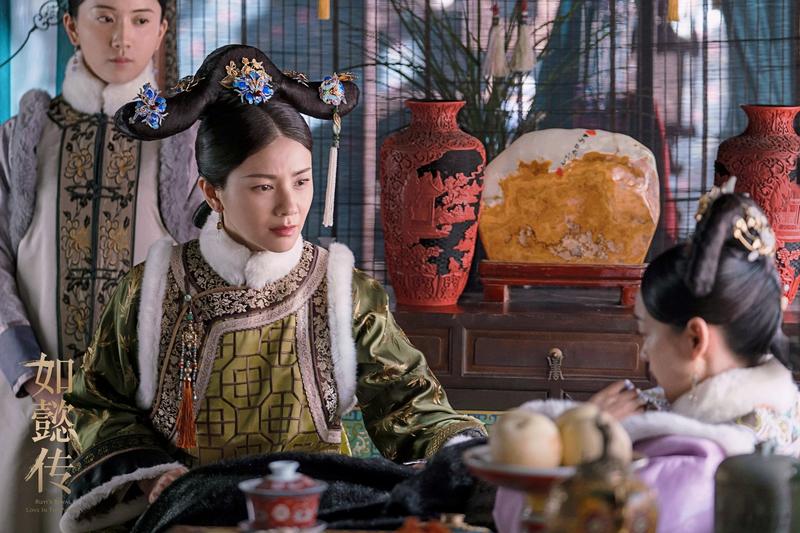 The latest palace drama Ruyi's Royal Love in the Palace features a number of struggling souls behind the walls of the Forbidden City, such as the concubine played by actress Hu Ke. (PHOTO / CHINA DAILY)

Based on the true story of Ulanara Ruyi, the second queen of Emperor Qianlong, the series chronicles her tragic life inside the walls of the Forbidden City.

Despite being the emperor's most beloved woman, the Manchu lady is forced to struggle for survival amid the endless scheming between the other concubines as they fight for the emperor's favor.

With a budget said to be upward of 300 million yuan (US$43.8 million), nearly five times that of Empresses in the Palace, Ruyi's crew were able to purchase many authentic props from Beijing's Panjiayuan Antique Market, tailor at least 4,000 opulent costumes and recruit 18 chefs to cook the royal dishes for the lavish dinning sequences.

"The Qing Dynasty reached the peak of its prosperity during the period between the reign of the emperors Kangxi and Qianlong (the former's grandson). As our story is set in part of this period, we have tried to make the props as authentic as possible and to recreate the golden age of the Qing Dynasty," Wang Jun, the director, tells China Daily.

He adds that the fine-art designers sought inspiration from many historical scrolls, including the paintings of Italian missionary, Giuseppe Castiglione, who served as an artist at the imperial court during the Kangxi and Qianlong eras.

But the series has also received criticism over the age of the leading performers.

In the early episodes, Zhou, who is in her 40s, plays the 15-year-old Ruyi, and actor Huo, who will turn 39 in December, stars as the 16-year-old Qianlong.

Despite their good looks and their accomplished acting ability, a number of online commentators said they made unconvincing teenagers, and criticized the series' producers for not using younger actors to portray the lovestruck teens.

Responding to the controversy, Wang blames himself, admitting he was wrong to shoot the protagonists' teenage scenes toward the end of the long nine-month filming schedule－three times longer than domestic series' usual take to shoot.

The latest palace drama Ruyi's Royal Love in the Palace features a number of struggling souls behind the walls of the Forbidden City, such as the first queen, starring Dong Jie. (PHOTO / CHINA DAILY)

"All the cast members were extremely tired. Zhou could only rest for three or four days each month. She was suffering from facial swelling while playing her character's teenage self," says Wang.

"Huo had just played the elderly Qianlong－depicted in his 80s. Even though he removed the aging makeup with the white beard, it was difficult for an actor to quickly transform himself into a teenager," explains Wang, adding that it would also have been a challenge to find two performers who looked like Huo and Zhou in their 20s or younger.

As well as a panoramic portrayal of royal life, the series also aims to explore a new formula as it reaches its climax, says Huang Lan, the producer.

"It will make the tale unlike any other (similar shows in the genre). We hope the audiences will be willing to accept our innovative efforts," she adds.