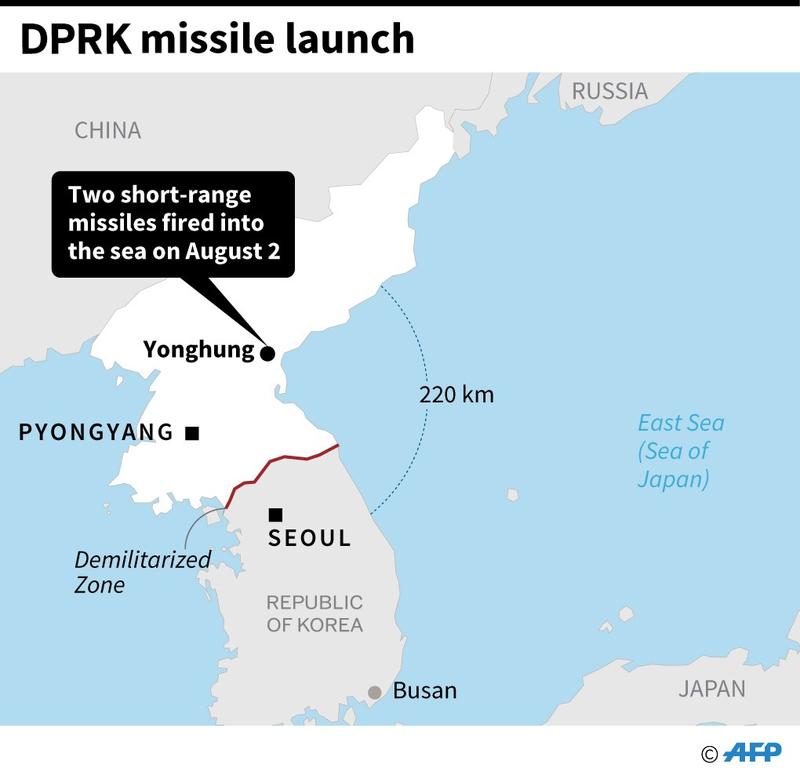 A map showing Yonghung on the east coast of DPRK, from where two short-range missiles were fired into the sea on Aug 2, 2019. (GRAPHIC / AFP)

BEIJING/SEOUL — The international community has urged de-escalation of tensions on the Korean Peninsula as the Democratic People's Republic of Korea (DPRK) launched several projectiles in just over a week.

The DPRK fired what appeared to be short-range ballistic missiles twice Friday into the sea off its eastern coast, the Republic of Korea (ROK)'s military and presidential office said, AP reports.

The DPRK fired what appeared to be short-range ballistic missiles twice Friday into the sea off its eastern coast, ROK's military and presidential office said, the third launch in about a week

The launches were conducted at 2:59 am (1759 GMT on Thursday) and 3:23 am (1823 GMT on Thursday) from the South Hamgyong province into the East Sea, Seoul's Joint Chiefs of Staff (JCS) said, adding that both projectiles flew around 220 km at an altitude of about 25 km.

It was the third launch in about a week. The DPRK fired multiple projectiles on July 25 and July 31.

ROK's presidential office, which held an emergency meeting presided over by chief national security adviser Chung Eui-yong to discuss the launches, said ROK and US militaries shared an assessment that the projectiles were likely newly developed short-range ballistic missiles the DPRK has been testing in recent weeks, AP reports. However, the office said further analysis was needed because the projectiles showed similar flight characteristics with the weapons that the DPRK test fired on Wednesday and described as a new rocket artillery system.

DPRK’s Foreign Ministry warned on July 16 that Pyongyang might end the scheduled working-level negotiations with Washington if the planned military drills happen. 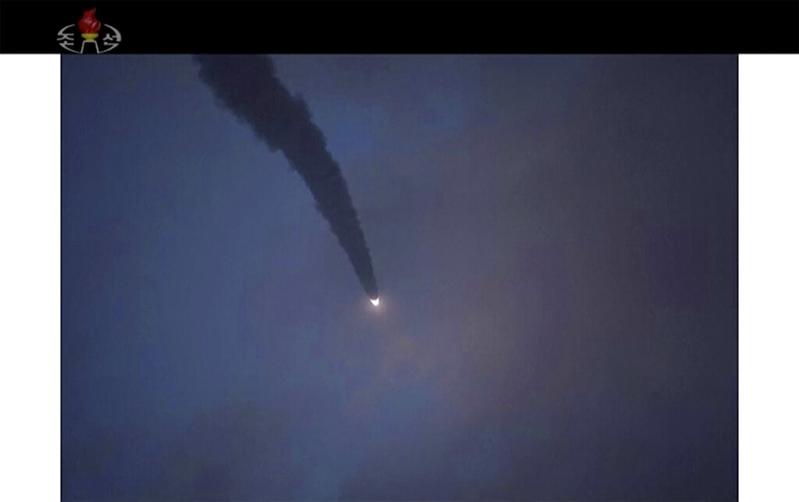 This image made from video of a still image broadcasted by the Democratic People Republic of Korea (DPRK)'s KRT on Aug 1, 2019, shows a rocket soaring during a test in the DPRK. (PHOTO / KRT VIA AP VIDEO)

ROK’s National Security Council expressed deep concern after DPRK’s Friday launching activities, saying it is of no help for efforts to defuse military tensions on the Korean Peninsula.

Japan's Defense Ministry said it was analyzing the launch and that the projectiles did not reach Japanese territorial waters or its exclusive economic zone, reports AP.

US Donald Trump on Thursday played down DPRK’s launches by saying he wasn't worried about the weapons recently tested by the DPRK, calling them "short-range missiles" that were "very standard," according to AP.

The remarks came after the DPRK's first firing of projectiles since Trump and DPRK leader Kim Jong-un's impromptu meeting in Panmunjom in June, during which the two leaders agreed on the resumption of working-level negotiation between the two sides on denuclearizing the Korean Peninsula.

"We continue to urge the North Koreans to resolve all of the things that the President (Donald Trump) and that Chairman Kim have talked about through diplomacy," she added, urging "no more provocations."

Britain, France and Germany on Thursday said in a statement after a closed-door meeting of the UN Security Council that they are concerned about the DPRK's firing of projectiles in the past few days.

China, a major party in the Korean Peninsula nuclear issue, has also urged caution and said efforts should be made toward realizing lasting peace in the region.