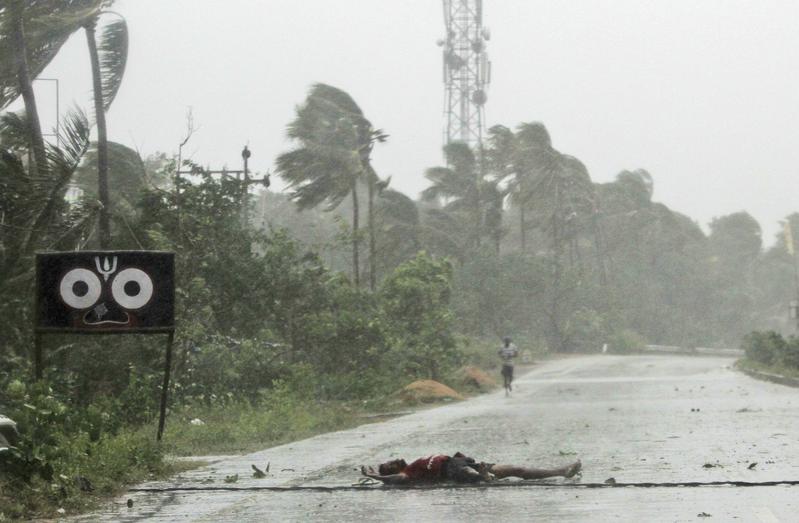 An Indian farmer lies on the road after falling while crossing the road due to gusty winds ahead of the landfall of cyclone Fani on the outskirts of Puri, in the Indian state of Odisha, May 3, 2019. (PHOTO / AP)

BHUBANESWAR, India — A cyclone barrelled into eastern India on Friday, bringing down trees and powerlines and "extensively" damaging the tourist town of Puri, but there were no early reports of casualties with a million people evacuated before it made landfall.

Tropical Cyclone Fani, the strongest storm to hit India since 2014, is weakening after barrelling into the eastern coastal state of Odisha, the chief of the weather office said on Friday.

Heavy rains, along with strong winds, will continue throughout Friday in Odisha, where more a million people have been evacuated, K J Ramesh, Director General of the state-run India Meteorological Department, told reporters.

“After making landfall this morning, cyclone Fani has started weakening and it’s likely to enter Bangladesh by tomorrow evening," he said.

"No cyclone ever had such a long duration in April.” 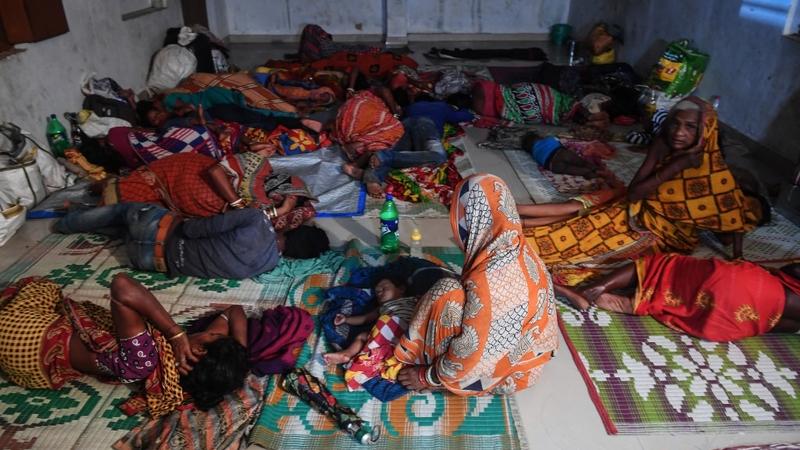 People evacuated for safety rest in a temporary cyclone relief shelter in Puri in the eastern Indian state of Odisha, May 3, 2019, as cyclone Fani approaches the Indian coastline. (DIBYANGSHU SARKAR / AFP)

Cyclone Fani spent days building up power in the northern reaches of the Bay of Bengal before it struck the coast of the state of Odisha at around 8 am local time, the state-run India Meteorological Department (IMD) said.

Howling winds gusting up to 200 kph whipsawed trees, uprooting scores, and driving rain impacted visibility, while streets were deserted in the state capital Bhubaneswar and Puri.

"No casualty has been reported so far," he said. 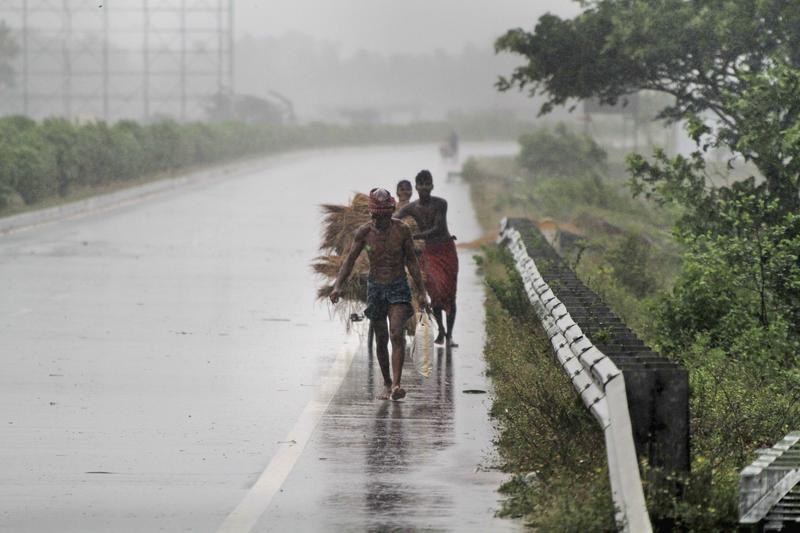 Villagers move to safer places amidst gusty winds ahead of the landfall of cyclone Fani on the outskirts of Puri, in the Indian state of Odisha, May 3, 2019. (PHOTO / AP)

Cyclone tracker Tropical Storm Risk put Fani as a powerful category four storm on a scale of one to five. The IMD said the storm was now weakening.

Close to 60 km inland, winds brought down electricity poles in Bhubaneswar, where authorities had ordered the airport to stay closed. Schools and colleges in Odisha were also shut. A major hospital in the city suffered extensive structural damage but all patients and staff were safe, authorities said.

"It was a massive cyclone, like many others our house is flooded. Boundary walls of houses around us have collapsed, trees have been uprooted. It is a panic situation," Anuradha Mohanty, a Bhubaneswar resident, told Reuters.

People packed into shelters, spreading mats to wait out the storm, television and social media showed.

More than 600 pregnant women were shifted into safe locations, with nearly 500 ambulances on standby. Some 242 medical institutions had been provided with power back-up, government authorities said.

In neighbouring Bangladesh to the north, authorities have begun moving 500,000 people from seven coastal districts, a government minister said.

The storm is due to hit Bangladesh late on Saturday and ahead of that, ports have been ordered shut, a government official said.

Odisha had evacuated more than a million people from the most vulnerable communities along the low-lying coast, Chief Minister Naveen Patnaik said on Twitter.

Hundreds of disaster management personnel were deployed in the state, and doctors and other medical staff were told to defer any leave until May 15.

Neighbouring West Bengal also planned to shut down the airport at Kolkata, its state capital. 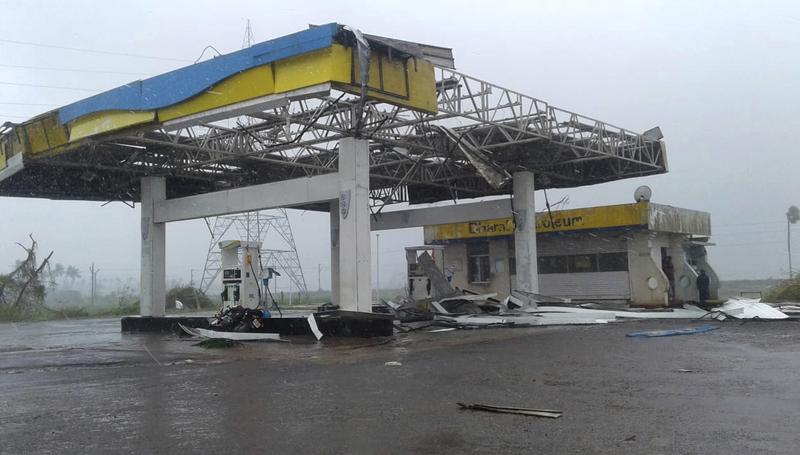 A destroyed fuel filling station by cyclone Fani after its landfall is seen on the outskirts of Puri, in the Indian state of Odisha, May 3, 2019. (PHOTO / AP)

Indian Oil Corporation Ltd, the country’s top refiner, said its 300,000 barrels per day (bpd) refinery, its newest facility on the coast of Odisha, had been built to withstand windspeeds of 250 kph and would not halt operations.

However, its 1,500 staff at the refinery were told to stay indoors, a company spokeswoman said.

India’s biggest state-owned oil and gas producer, Oil and Natural Gas Corp Ltd, had shifted people from its rigs off the coast of Andhra Pradesh as a precaution.

A senior company executive in Reliance Industries Ltd, which also runs an oil and gas block adjoining the ONGC block, said the company was following standard operating procedures as prescribed during a cyclone.

India's cyclone season can last from April to December, when severe storms batter coastal cities and cause widespread deaths and damage to crops and property in both India and neighbouring Bangladesh. 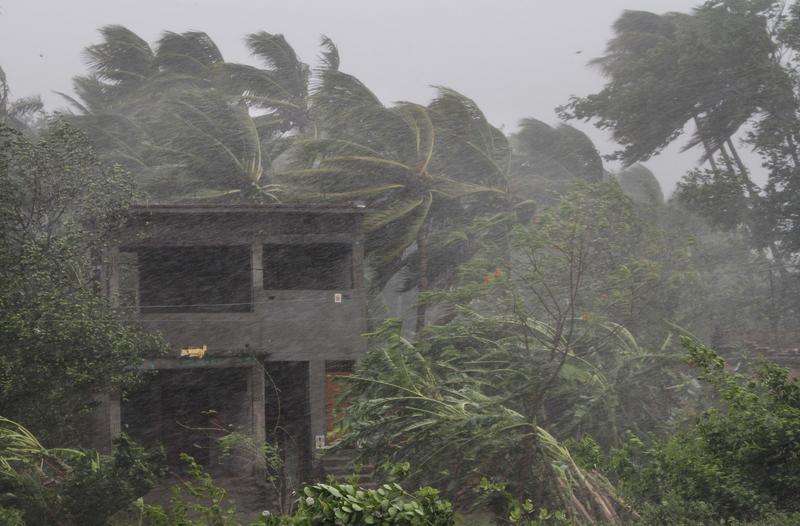 An abandoned house and trees bend with gusty winds ahead of the landfall of cyclone Fani on the outskirts of Puri, in the Indian state of Odisha, May 3, 2019. (PHOTO / AP)

A super-cyclone battered the coast of Odisha for 30 hours in 1999, killing 10,000 people. In 2013, a mass evacuation of nearly a million people likely saved thousands of lives.