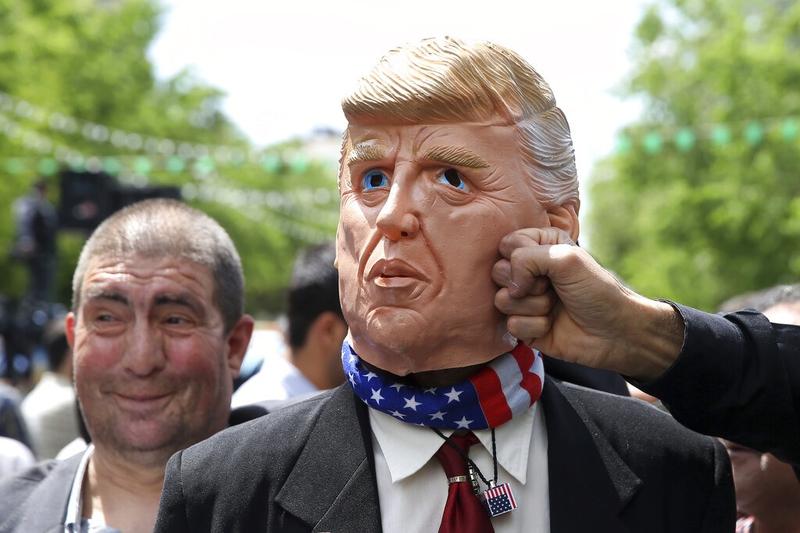 An Iranian protester pretends to punch a mask mocking President Donald Trump during a rally after Friday prayer in Tehran, Iran, May 10, 2019. (DBRAHIM NOROOZI / AP)

WASHINGTON — US President Donald Trump made a fresh threat against Iran in a tweet Sunday, deviating from his fairly reserved tone days ago.

If Iran wants to fight, that will be the official end of Iran

"If Iran wants to fight, that will be the official end of Iran," Trump tweeted on Sunday afternoon.

The president's new tweet is an escalation of his tough stance on Iran.

When asked by a reporter at the White House on Thursday morning about whether the United States was going to war with Iran, Trump replied "I hope not."

READ MORE: Trump tells aides he does not want US war with Iran

Trump told his acting Defense Secretary Patrick Shanahan on Wednesday that he does not want to go to war with Iran, The New York Times reported on Thursday, citing several anonymous administration officials.

Over recent weeks, Washington has ratcheted up pressure against Tehran with a series of sanctions, designations and military threats, following Washington's year-long campaign against Iran after the US exit from the landmark Iran nuclear deal in May last year.

On Wednesday, the US State Department ordered the non-emergency US employees in both the embassy in Baghdad and the consulate in Erbil to leave Iraq.

Earlier, the US military said the US forces were on high alert in Iraq and Syria over fears of "imminent threats" from Iran-backed forces in the region.

The US measures came amid the tense situation in the region after Trump decided not to re-issue the sanctions waivers for major importers to continue buying Iran's oil when they expired in early May.